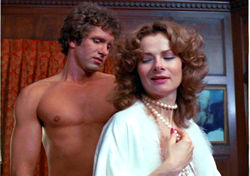 going at it with boyfriend Robert (Gillis) in the next bedroom. However, Robert decides to pay a visit to Sandy later in the bathroom, triggering a series of hallucinatory encounters involving Sandy and other characters. At first the sex scenes are fairly standard, such as a romp with a tennis teacher (Moore) and family friend Bonnie (Hart), but things get much weirder when Sandy visits a magician (Teague) who levitates her and brings her to sexual ecstasy. Things finally wrap up in the truly outlandish climax as Sandy and the film's other characters (including Eric Edwards as a goofball prone to re-enacting the Psycho shower scene) take part in a colorful, costumed orgy, followed by a little twist ending.

Like most 35mm porn features, Neon Nights was shot with a single camera taking the maximum advantages from such a limited set-up. Howard keeps the frame lively and colorful even during the most vanilla sex scenes, and the exposition manages to bounce along nicely without tempting the viewer to reach for the fast-forward button. The second half is where everyone really shines, as the screen is flooding with baroque lighting and dark, atmospheric sets; this would play nicely with similarly gothic porns like Through the Looking Glass and Pandora's Mirror. This film also arguably makes the best use of Thatcher, who 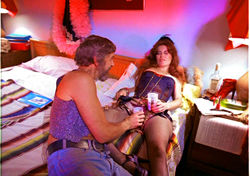 specialized in playing wholesome high school types and earned quite a following throughout the 1980s. The film benefits from a strong cast, all of whom are capable of deliverng a genuine performance regardless of whether they're bouncing up against each other. Barbour and Hart do their usual professional job and prove their acting chops yet again, while Gillis, Edwards, and the underrated Moore earn their leading man stripes again. Though a few bits may be a tad harsh for some viewers (including a brief bit of fisting that most video companies would prefer to dodge), this is a decent example of a "couples" adult film that flatters and respectfully explores its female protagonists rather than focusing on their debasement.

features the original mono track and a surprisingly effective 5.1 mix, which tastefully spreads the music track to the other speakers and creates a nice ambience to the film without sounding gimmicky. Howard turns up for a feature commentary track in which he reminisces about the technical nature of the shooting, the logistical problems of shooting real sex, and the personalities of the various actors involved. He also returns to contribute a hit-or-miss commnetary for over 20 minutes of outtakes, which are basically the full raw footage from all of the sex scenes which provide a far more extended, intimate look at how much was shot of the performers. Finally, the disc rounds out with two different theatrical trailers for the main feature.