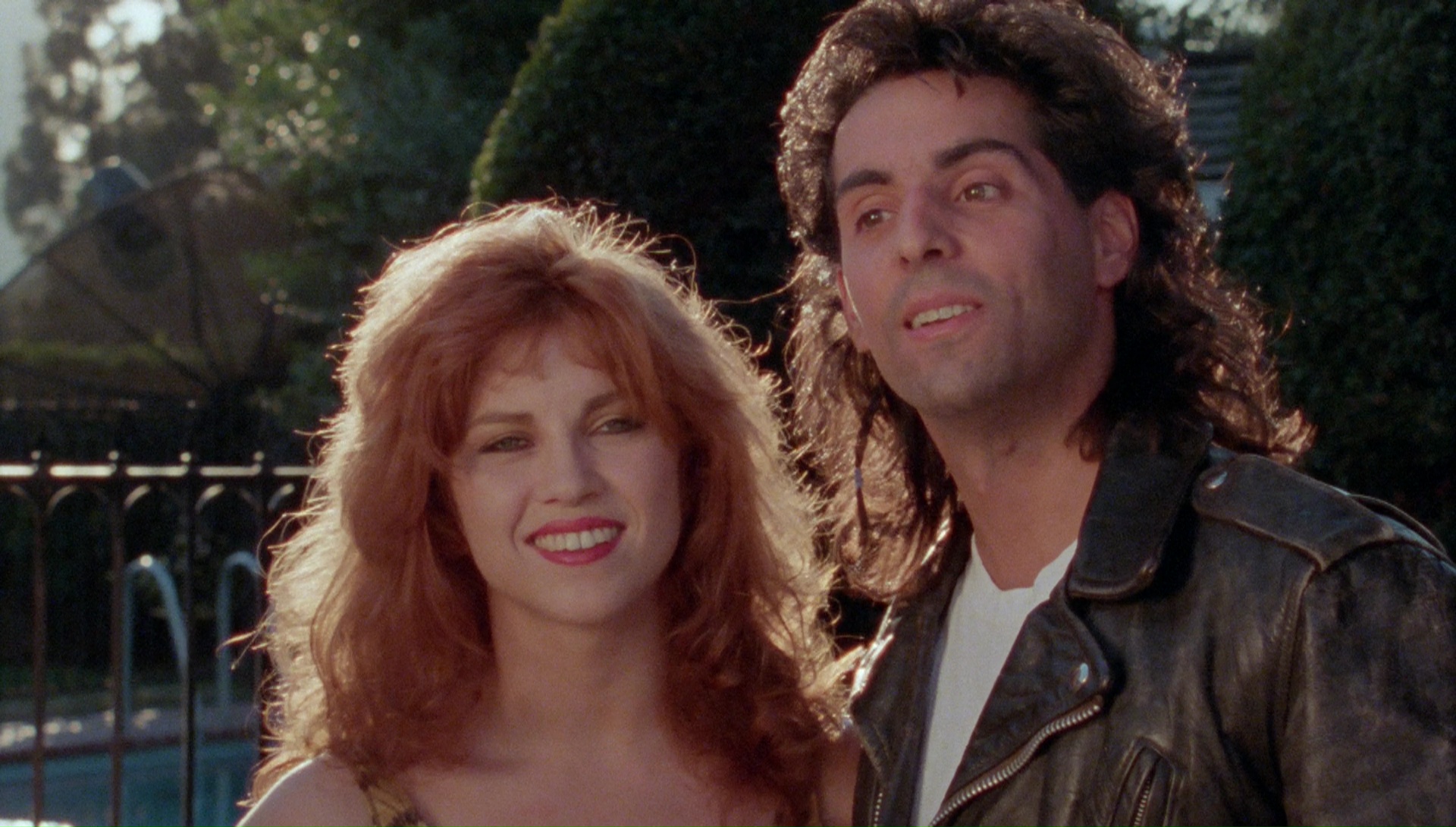 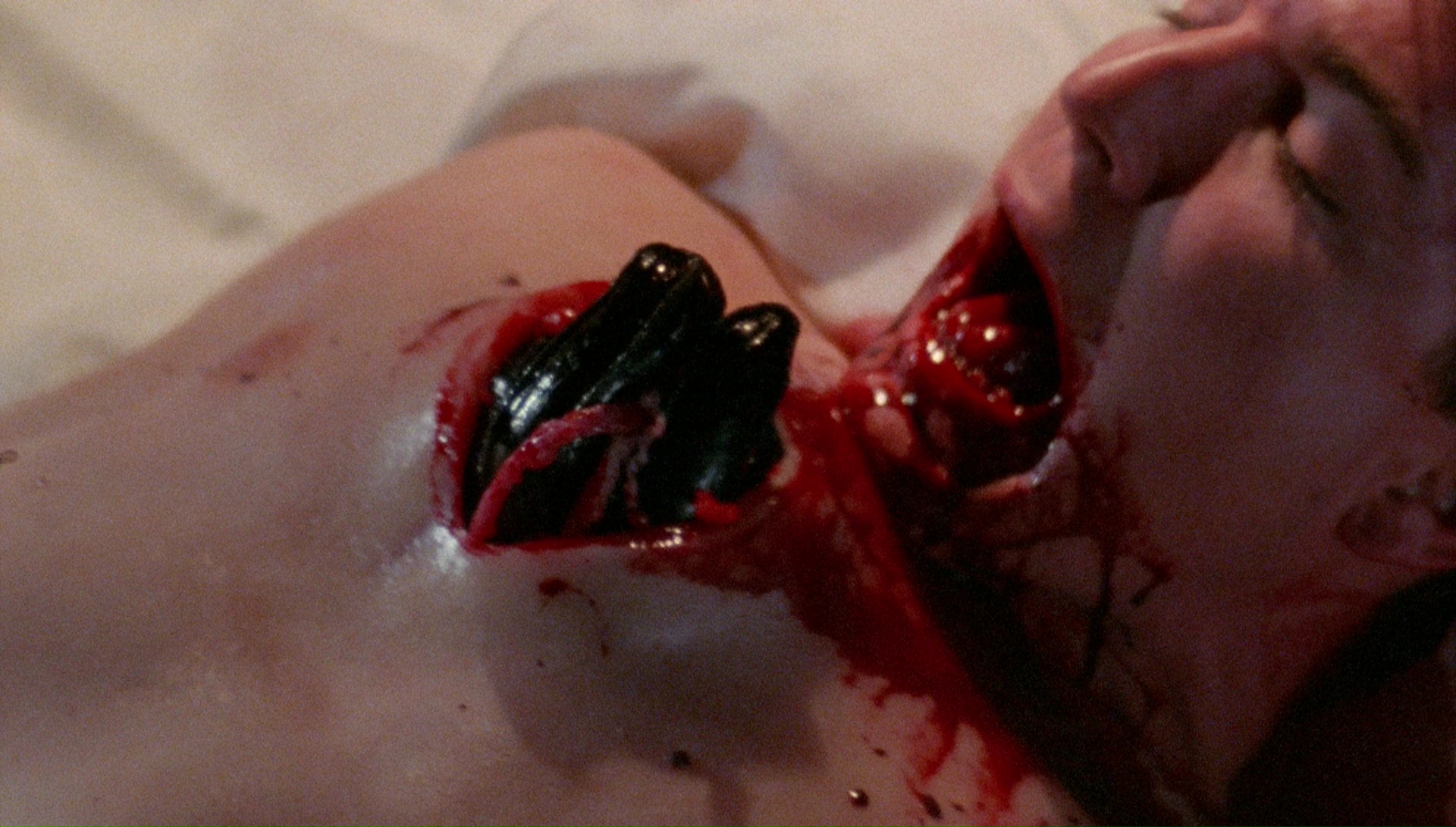 Two years into his run as one of exploitation’s busiest directors, David DeCoteau had established himself as a reliable purveyor of monster antics and T&A with titles like Creepozoids and Nightmare Sisters. By 1989, the market for sexy home video was strong enough for him to take on a new pseudonym, “Ellen Cabot,” with the first two titles comprised of perhaps his goriest film, the peculiar slasher Murder Weapon (not an action film, despite what its original artwork might imply), and a trippy erotic thriller, Deadly Embrace, both featuring roles for one of his most frequent muses, scream queen Linnea Quigley. Ms. Cabot would return to movie screens on and off for the next decade or so with titles like Beach Babes from Beyond, Petticoat Planet, and the jaw-dropping Naked Instinct, but if you’re looking for a good place to start, this double bill from Vinegar Syndrome should fit the bill.

An overnight slumber party seems like a lot of fun when it’s thrown by curvaceous brunette Amy (Vice Academy’s Russell), who’s prone to long body oil sessions by the pool, and perky blonde Dawn (Quigley), who enthusiastically rides any man in sight like nobody’s business. Unfortunately they’ve also just been released from an insane asylum where they met and became friends (both being the daughters of ruthless mobsters and all), under the questionable supervision of their psychiatrists including Dr. Randolph (Wonder Woman’s Waggoner, getting top billing just because). Soon the men who come by to say hi or spend the night (mostly ex-boyfriends) start turning up dead, offed in spectacularly gory fashion. 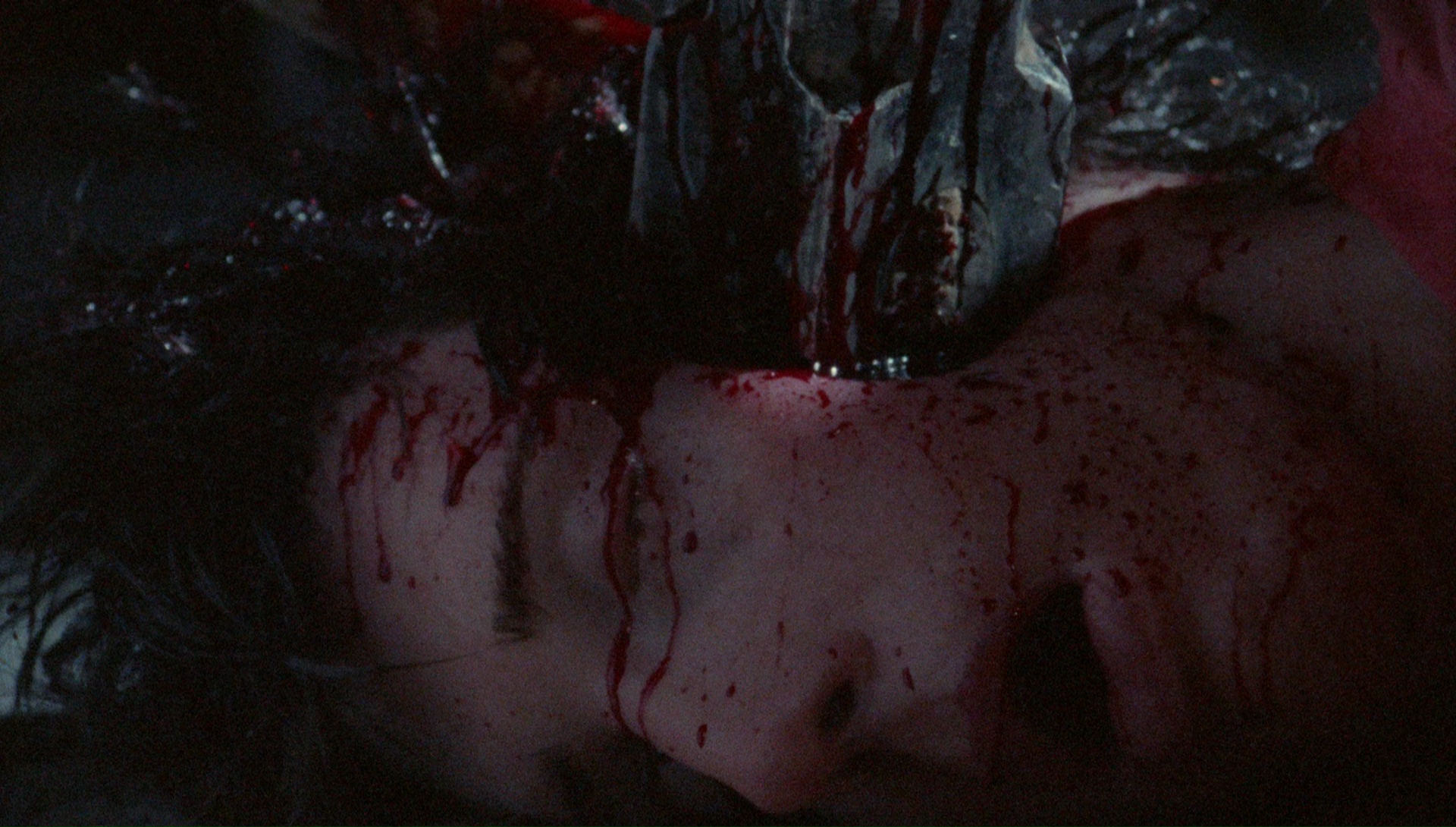 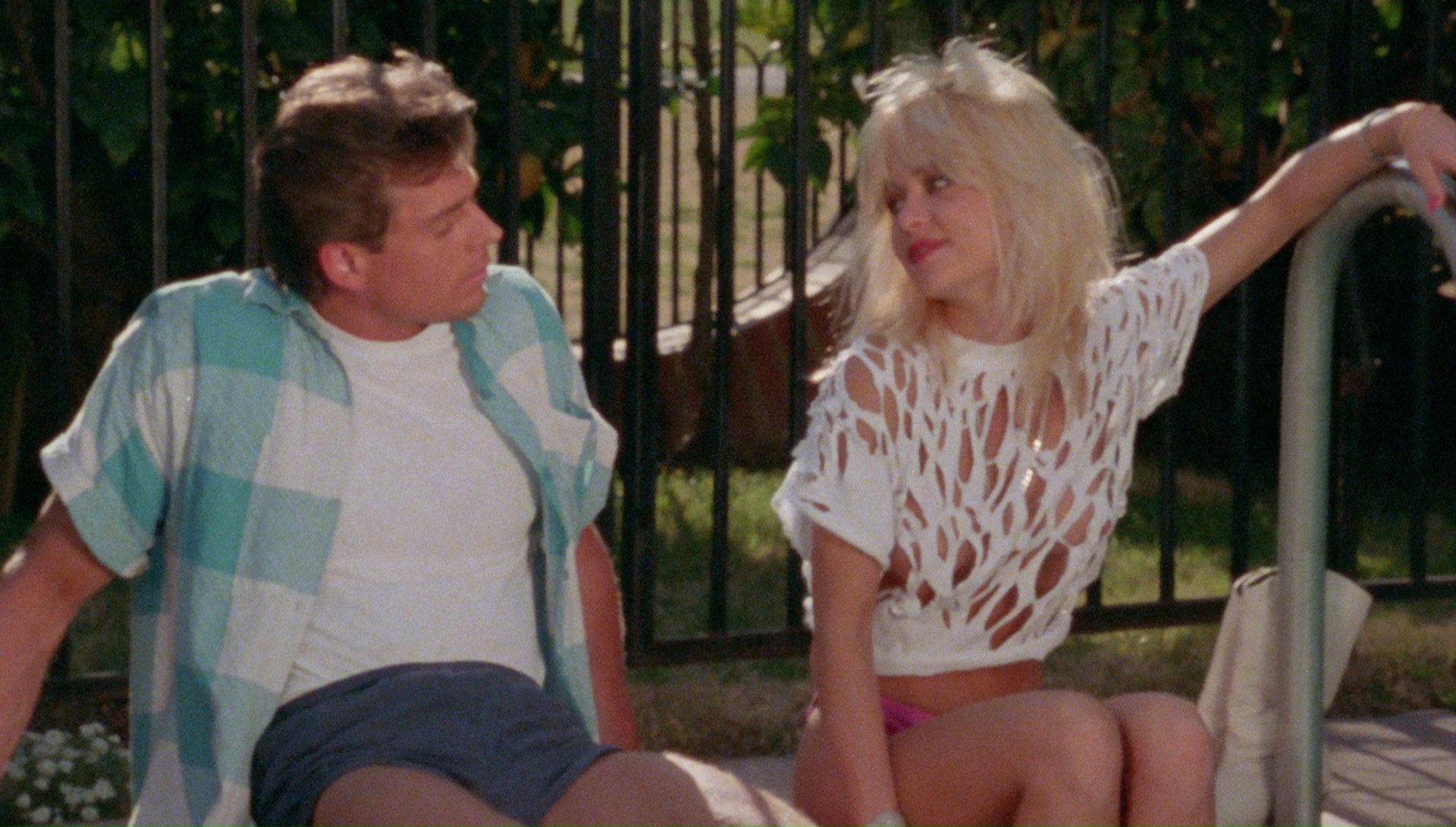 Completely absurd and wildly entertaining, this one barely even tries to be scary in any traditional sense but definitely delivers on the blood and boobs front. The rubbery murder scenes splash around the fake blood with wild abandon, particularly during a pulverizing sledgehammer-to-skull attack and a ridiculous variation on the Friday the 13th “arrow in the neck” gag here replaced with an entire gloved hand. Quigley definitely takes top acting honors, but it’s also a kick seeing one of the male dolts played by Silent Night, Deadly Night 2’s Eric “Garbage day!” Freeman, credited here as “Damon Charles” and getting a weirdly abrupt sex scene with Quigley in a parked car.

Just as skin-filled but much lower on the blood quotient, Deadly Embrace compensates by amping up the weird quotient for the story of pampered SoCal housewife Charlotte Moreland (Caged Fury’s Miller, billed as “Ty Freeman”), an incessantly horny and voyeuristic lady who enjoys watching guys through the one-way glass in her guest room closet. She’s married to the inattentive Stewart (Vincent), who’s distracted by an affair at the office, so instead Charlotte turns her attentions to Chris (current reality show editor Abraham), the handyman and gardener who hangs around the house far longer than his work shift and tempts her by the pool when he isn’t busy making phone calls to his girlfriend (Quigley). The whole thing is framed with police interviews (with no faces shown) so we know it all ends badly, and boy, does it ever. 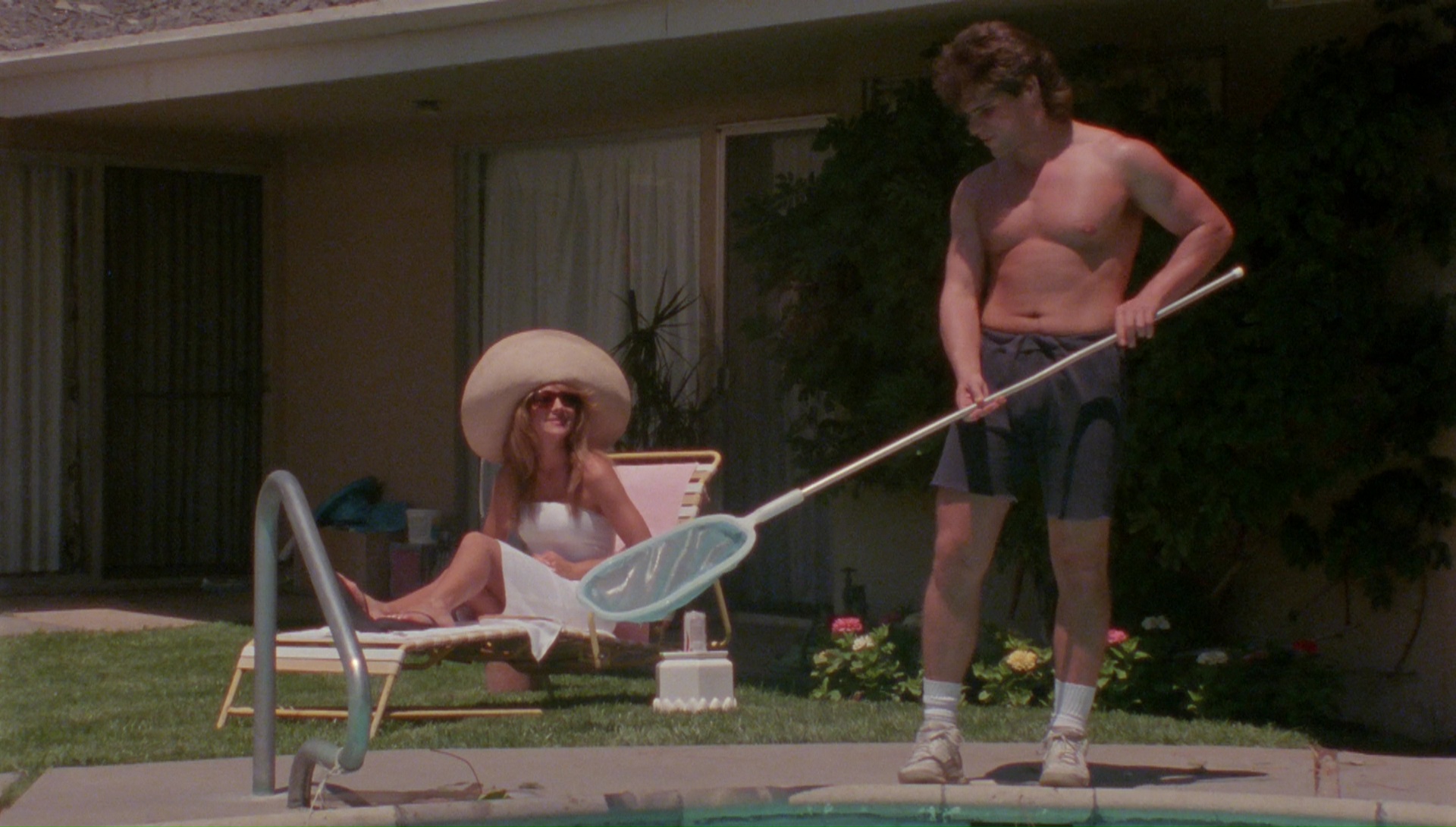 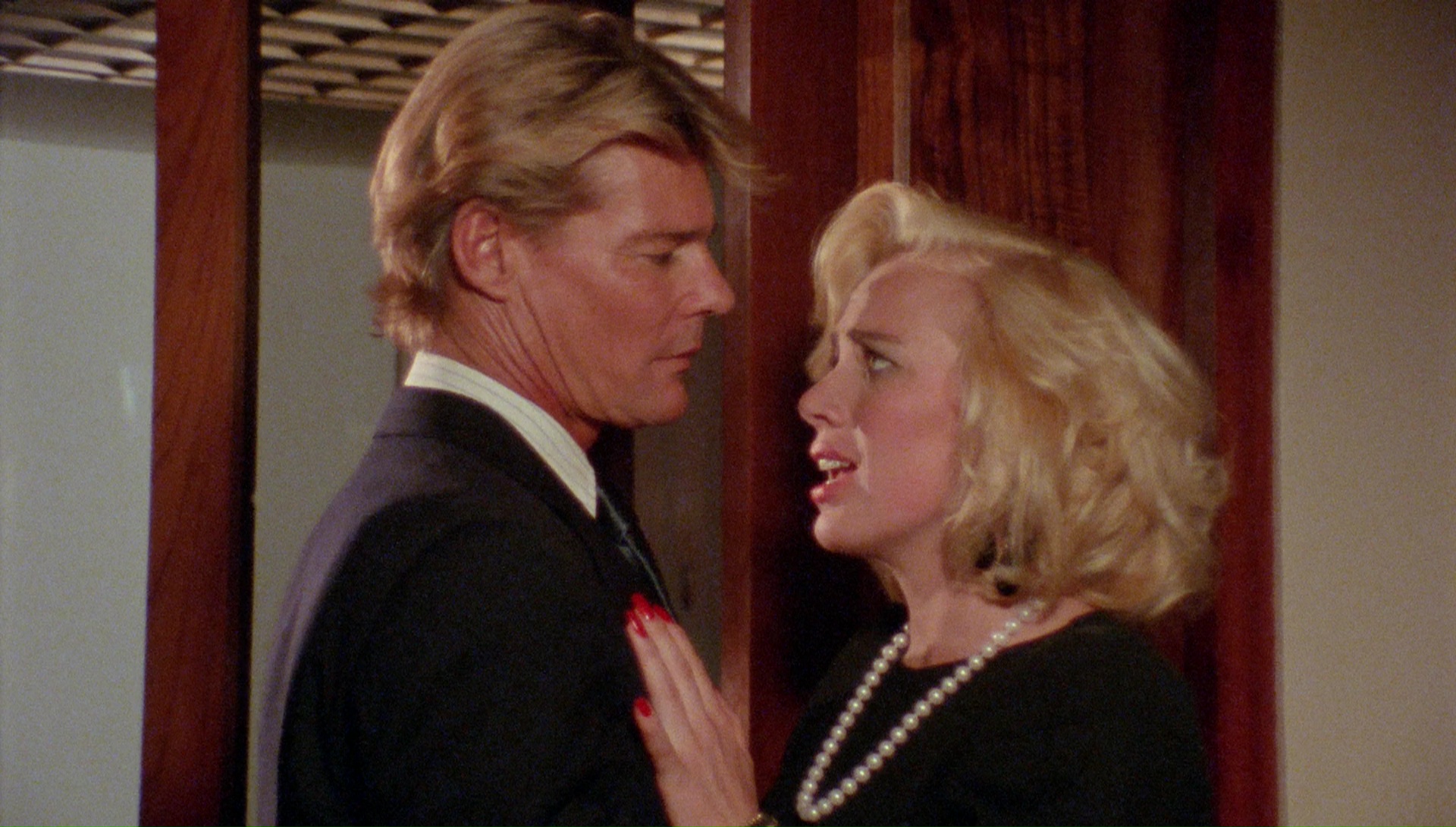 Top-billed Vincent doesn’t get a lot to do here until the last few minutes, but fortunately Miller gives such a crazed in-heat performance you won’t even notice. The camera goes crazy for bare flesh here as much as possible with both Miller and Abraham delivering more nudity than you’d probably expect, and for good measure, Michelle Bauer shows up in nudie fantasy segments as a sex spirit tempting Abraham to cheat on his girlfriend, or something. On top of that, showbiz personality and frequent game show fixture Jack Carter is on hand as the family attorney, mostly providing exposition to set up the deadly twist ending.

Both DeCoteau and Quigley are all over the Vinegar Syndrome release, which marks the first new transfers these films have had in ages since their VHS releases and recycled full frame editions on DVD from MVD and Rapid Heart Pictures over the years. The pair make for good company on audio commentaries for both films, talking about the hasty shooting schedules (both were made in under a week each), the requirements for various levels of nudity (with some scenes called off early), DeCoteau’s squeamishness and his discomfort with some of the graphic gore, and Quigley’s enthusiastic participation in just about anything he offered her at the time. DeCoteau even stops things cold to take a phone call at one point, which might be a commentary first. He also provides brief two-minute video intros for each films, talking about how they were intended for the home video market and haven’t looked like real film until now. The transfers themselves from the original 16mm negatives are very impressive under the circumstances, bringing a colorful and noir-ish sensibility to both films in sharp contrast to the flat, milky look they used to have. The DTS-HD MA English mono audio tracks sound perfectly satisfying, with optional English subtitles provided. Also included are a Murder Weapon video trailer and 3 minutes of chaste Deadly Embrace outtakes, plus the usual reversible cover art options.