A major godsend for TV horror fans, the five-disc Australian release of The Complete Ghost Stories of M.R. James features a somewhat misleading title (it's really the complete ghost stories made for the BBC in the UK), but that's more than enough to make it a heartily recommended title. Considered by many to be the father of the modern ghost story, James is perhaps best known among horror fans for his chilling short story "Casting the Runes," which formed the basis for the classic 1957 film Curse of the Demon. However, his tales were later adapted frequently for British television, and in the early '70s his work was the core of what became an annual tradition affectionately known as "A Ghost Story for Christmas." Often relying on the power of suggestion and slow-burning shocks, these yearly yuletide treats became a staple of horror viewers' diets and became sought-after collector's items on the home video market for years to come.

The first disc contains both versions of "Oh Whistle and I'll Come to You," which is also available from the BFI and reviewed in depth here, while the second disc has "The Stalls of Barchester" and "A Warning to the Curious," reviewed here. 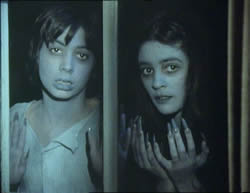 The third disc kicks off with my personal favorite of them all and one of the most difficult to see until now, "Lost Hearts." This one was covered last year in my Facebook roundup of the "Top 20 Scary TV Episodes," but for those who missed it, the story involves a young orphan named Stephen (The Tomorrow People's Gipps-Kent) who goes to stay with his mysterious and very odd Uncle Abney (Gorgo's O'Conor), an alchemist who has an intense fascination with keeping track of the boy's age. Stephen hears stories about two children, a gypsy boy and a young girl, who died on the property years before, and one night the two of them -- complete with blue skin and long, sharp fingernails -- begin prowling the house and lurking in his room, accompanied by off-kilter hurdy gurdy music. Oh, and their hearts have been ripped from their chests. A seriously unnerving predecessor to the vampire kids in Salem's Lot with a dash of Werner Herzog-style artiness thrown in, this is the shortest, tightest, and flat-out scariest film in the set, this one is a little different in that the real horror lies in the middle of the story rather than the end (which closes on an ironic and strangely whimsical note instead). It's not an all-out terror fest, of course, but the sight of those two undead kids smiling as they bob up and down the hallways is not easily forgotten. The picture quality here (once again sourced from the 16mm original) is leagues better than the cruddy dupes floating around for years, as once again this has never had a legit release until now. 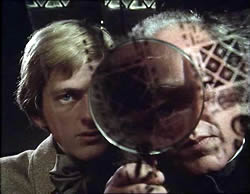 Things settle down slightly for the second film on disc three, "The Treasure of Abbot Thomas," which plays like sort of a combination of "Barchester" and "Warning" as it involves a treasure hunt inside an old church (of course). Reverend Somerton (The Stone Tape's Bryant) enjoys debunking the supernatural, even when it comes to seances held by the mother of one of his friends, Lord Peter (Lavers). He'd much rather spend his time hunting for the legendary treasure of Abbot Thomas, hidden somewhere on the monastery grounds on which Somerton now resides. After much deciphering of Latin and breaking of codes, Somerton, with the aid of Lord Peter, finally finds his way to an underground catacomb where a strange black slime seems to emanate from the treasure's location. But that's just the beginning of the horrors waiting in store for him... The bulk of this one is more of a medieval-tinged puzzle as the two men try to piece together the mystery of the missing treasure, but it veers into full-on gothic terror in the final stretch with a great shock sequence in the catacombs and an eerie little coda that doesn't quite sink in until the credits have finished rolling. Fine stuff all around, this wouldn't be the best title for newcomers to jump into first -- but it's definitely worth viewing. Again this was never granted an official video release outside of this set, and the image quality (again 16mm) is on par with the rest. 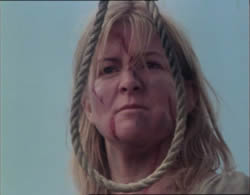 Finally disc three (the only one with a trio of separate films) closes out with the last of Lawrence Gordon Clark's James tales for the BBC, "The Ash Tree." It's probably the most obscure of the bunch as it rarely reappeared on TV, but the nightmarish finale left a major impression on some lucky viewers as it involved a bunch of... well, let's just say fans of "The Zanti Misfits" from The Outer Limits will find an even more grotesque variation on that idea here. The always excellent Edward Petherbridge (who later went on to play Lord Peter Wimsey in a great trio of '80s UK TV mysteries) carries the show here as Sir Richard, a layabout who inherits the estate of his late uncle. Unfortunately, upon arrival he's haunted by dreams of his witch-hunting ancestor, Sir Matthew (Petherbridge again), whose bloodline was cursed by a sorceress. Soon animals start dropping dead on the property, and the huge, seemingly impenetrable ash tree outside his window seems to play a larger role in the supernatural history of the house than anyone's letting on. This one's really all about the final five minutes, a dark, scary, fiery finale that probably sent the majority of its viewers rushing to flip on the lights after the credits rolled. Seeing so overtly monstrous and horrific in a James adaptation is still a bit surprising, and Clark wisely keeps things dim and shadowy enough to pack a punch within the limitations of that familiar film stock. Once again, this is quite the rarity and has never been available

on video at all outside of this box. As with all the '70s titles, it's presented full frame.

After the "Ghost Story for Christmas" ran its course by the end of the '70s, it seemed to be gone forever... until fan nostalgia began kicking it back into gear again around the turn of the millennium. In 2000, a three-part special appeared for the holidays called "Christopher Lee's Ghost Stories for Christmas," with the legendary horror star sitting in a suitably antiquated yuletide setting by fireplace to deliver his own dramatic half-hour readings of a trio of M.R. James tales: "A Warning to the Curious," "The Stalls of Barchester" (interestingly still under its BBC TV title rather than James' original, "The Stalls of Barchester Cathedral"), and "Number 13." This isn't just a static recitation, however, as Lee acts out the stories (audio book-style) intercut with some atmospheric location and point-of-view shots to augment the action. All of them are quite the treat for fans of either Lee or James, shot with plenty of moody style. The episodes are presented in anamorphic widescreen (1.78:1) and look excellent.

Five years later, the BBC started its ghost story tradition in earnest again with "A View from a Hill," a simple story about young historian Dr. Fanshawe (Letheren), who borrows a pair of binoculars when his own get broken during a bike mishap. When he borrows another pair once belonging to the late father of his host, he finds he can see things in the binoculars that don't appear in reality -- especially a strange abbey from his vantage point next to the sinister Gallows Hill. What is their secret, and why do the binoculars seem to open a window into the world of the dead? A credible attempt to revive the '70s TV tradition, this one feels a little too ratty to work entirely (it was shot on what appears to be standard def video for some reason); however, it does contain a few good shocks (especially the skull face gag), and the subdued but eerie ending wraps things up on a nice shuddery note. The anamorphic transfer does what it can with the source material, which clearly isn't optimal but certainly acceptable if taken in the spirit as, say the Doctor Who revival before it wisely made the switch to HD. Again, not available anywhere else on video.

That story is the first on the fifth and final DVD, and luckily the technical chops of the next year's offering, "Number 13," are much better. It's a beautifully rendered little spooker that admirably captures the diabolical visual flair of the classic episodes, albeit with a glossier new sheen. The very good TV actor Greg Wise (who appeared in Sense and Sensibility and went on to marry Emma Thompson) takes charge here as the studious Professor Anderson, who causes some difficulty at his hotel when they can't seem to provide a room complete with both a comfortable bed and a good working desk. Finally he finds what he wants in Room 12, which is situated next to Room 14... with no number 13 between them. Another scholar had disappeared on the premises suddenly without paying his bill, so he has to pay upfront before beginning his work-- which takes him into a dark history involving witchcraft, local scandal, and Heironymous Bosch's painting, "The Garden of Earthly Delights." Most unsettlingly, in the middle of the night he hears disturbances... and when he walks outside, Room 13 is suddenly situated next door. What's inside the room, and can he unravel its mystery before the demonic danger inside claims him?

A great way to close out the set, this one (yep, again, not on video elsewhere) looks terrific and would actually make a nice intro for younger fans who might need a little coaxing before jumping into the more challenging fare. The evocative music score is a big plus as well, and while the little bonus twist at the end won't come as much of a shocker, the climax itself is a great piece of barnstorming terror, revealing just enough behind the door to the thirteenth room to have you looking nervously over your shoulder. Complete with some surprisingly effective middle-aged makeup and gray temples, Wise is excellent in the role; the supporting cast is notable as well, including Paul Freeman (aka Belloq from Raiders of the Lost Ark) and a sympathetic turn from Tom Burke (Donkey Punch) as the professor's sounding board for all the strange events, complete with an interesting homoerotic undercurrent that pays off with a nice chuckle at the end. This one sadly didn't mean more yearly ghost stories come Christmastime, but given the prolific nature of James' writing, the BBC will hopefully still be encouraged to keep the tradition going on and off long into the future.