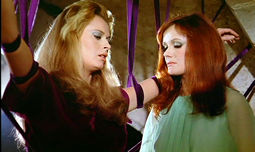 castle, an insatiable villainess, succulent potential female victims, and even a sex-crazed dwarf, but its hypnotic artistry easily puts it in a realm all its own. Cleverly riffing on the Mallory version of the King Arthur legend, the story follows two modern day girls, Françoise (Saunin) and Anna (Perello), whose afternoon road trip takes them to a strange house where they spend the evening. The next day, Françoise finds Anna missing from their bed and follows a sinister, gray-haired dwarf, Gurth (Baillou), on a boat to a mysterious castle. There the mythical Morgana le Fay (Delpierre) welcomes her and offers a choice: she can either become an immortal, sapphic resident of the castle (as Anna has already chosen), or she can grow old in the dungeon with the other party poopers. Soon all the castle girls are spending their time having banquets, licking each others' calves, spilling wine on their bare breasts, and stringing each other up with colorful ribbons for light bondage. 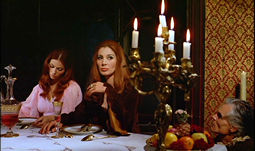 Rarely seen in its native country and completely unknown to English-speaking viewers until its release in the early days of DVD via Pagan in the UK, this debut film from future TV fantasy helmer Bruno Gantillon (Highlander, The Hitchhiker, and tons of Canadian and French programs) would actually play better alongside the works of Walerican Borowczyk than Rollin or other French sleaze favorites like Seven Women for Satan. (Or considering its fetishistic masked sex parties, you could bill it up with Sin in the Suburbs.) The entire film is extremely well photographed with a careful eye for colorful, erotically charged details; though the women show off a considerable amount of skin, the nudity never seems gratuitous. The sparse but haunting score keeps the ear occupied as well, and the story - which makes subtle but clever use of its titular witch queen character - remains unusual enough to carry the viewer through some of the more langorous passages.

Unlike the rather unremarkable-looking UK disc, Mondo Macabro's American release is a visually stunning presentation from the original negative; as an added bonus, it reinstates several minutes (about four or five judging from PAL conversion) of heaving bare breasts 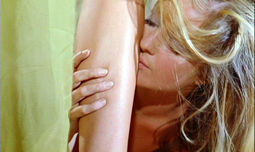 and fetishistic caressing censored from the original release version. Bravo! None of this helps the story along, of course, but who cares? The mono dialogue sounds crisp and clear, and the optional English subtitles are sharp and legible.

The extras section kicks off with Gantillon's stylish, earlier short film, "An Artistic Couple" ("Un couple d'artistes"), which carries the Borowczyk comparison even further as it tells another macabre variation on Roald Dahl's "The Landlady" about hospitable hosts hiding perverse intentions for their guest. Forget the predictable story and enjoy the sumptuous visuals, which make one sorry Gantillon didn't direct more financially robust projects later in his career. The director himself turns up for a solid video interview in which he talks about his early short work, the main feature, and his subsequent activities; you also get three short deleted scenes (two silent, one from a rough-looking Italian TV broadcast) that offer some alternate footage and illuminate one interesting plot point. Other bonus material includes a typically thoroguh Mondo Macabro essay detailing the film's history, cast and crew bios, still and promotional galleries, the French trailer, and that familiar, insane Mondo Macabro "also available" reel. The wild cover art looks great but might lead viewers into expecting something like a wild '70s Italian sex film.