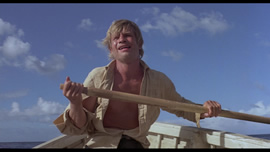 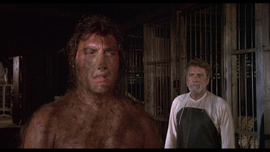 The second and easily the mildest of the three official big screen adaptations of H.G. Wells' sci-fi/horror novel, The Island of Dr. Moreau was part of a short-lived attempt to bring PG-rated nostalgia back to the genre thanks to predecessors like Doc Savage: Man of Bronze and the big-budgeted 1976 version of King Kong. That said, it's still a pretty strong PG rating for what remains a fairly perverse and disturbing story, even if it's less outrageous than the pre-Code extremes of Island of Lost Souls or the notorious insanity of John Frankenheimer's 1996 freak out starring Marlon Brando.

American International Pictures thought it had a sure thing with this comparatively lavish monster outing featuring Burt Lancaster (fresh off of The Cassandra Crossing and Twilight's Last Gleaming), Michael York (who had just done Logan's Run and was still riding the wave of Cabaret), stunning Nicaraguan-born model Barbara Carrera (Embryo), and a ton of latex monster masks created by legendary makeup artists Tom Burman and John Chambers (Planet of the Apes) just before he got involved with a certain CIA operation called Argo. The film received a lukewarm reception from critics and audiences but became something of a staple of television for years, in turn becoming something of a 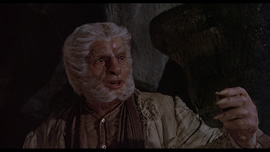 nostalgia item itself among a generation of young viewers. Alas, AIP would quickly become a shadow of its former self thanks to costly endeavors like this and Meteor, which weren't enough to counterbalance the occasional hit around that time like Love at First Bite and The Amityville Horror. 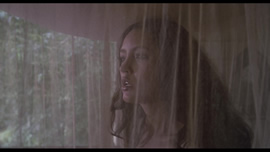 By the end of the decade, AIP would itself be sailing off into the sunset.

After his ship sinks, lone naval survivor Andrew Braddock (York) finds refuge on an island overseen by Dr. Moreau (Lancaster), a seemingly kindly gentleman living with his assistant, Montgomery (Davenport), and the beautiful but mysterious Maria (Carrera). However, the other residents seem to be a bit more primal in nature, existing somewhere between man and beast with the Sayer of the Law (Basehart) dictating what remains morally off limits. Braddock comes to realize the chilling truth about Moreau's genetic experiments and plans to leave, but the doctor proves too quick as he decides to make Braddock the next potential subject in his quest to create the perfect union between human and animal.

A busy actor in his own right, director Don Taylor got his start both in front of and behind the camera on television in the '50s and scored a reasonable box office success with 1971's Escape from the Planet of the Apes, probably the reason he was hired here. A gun for hire if there ever was one, he brought a slick professionalism to his work and managed to keep this one on time and within budgetary constraints, which in turn led to a salvage job stepping in one year later for Damien: Omen II. While it's tempting to imagine how this might have turned out with a dangerous talent behind the camera (just imagine someone like 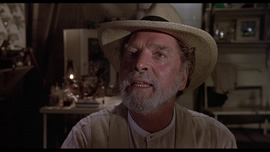 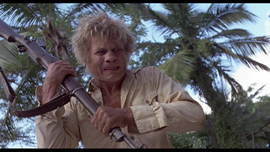 turned loose on the material), the result here is an amusing slice of pulpy entertainment with enough monster faces and action scenes to provide an evening's entertainment. York and Carrera make for a reasonably compelling couple, while Lancaster is oddly defanged with all of the nasty dissection aspects of the original story obliterated in favor of the more trendy focus on genetic manipulation. That still doesn't quite explain what transpires at the end, but if you watch it all as sort of a cracked fairy tale, it starts to make some kind of sense.

Essentially available on home video without a break since the early days of VHS (as one of those beloved clamshell Warner Bros. boxes), The Island of Dr. Moreau has always fared pretty well on the small screen with MGM doing a nice job on DVD in the early '00s. The negative has been kept in great shape, so not surprisingly, it looks quite solid on Blu-ray as well with a rich, colorful HD transfer from MGM. The first Blu-ray was released as a bare bones release in the UK from 101 Films, but you get a bit more bang for your buck with the 2015 American version issued by Kino Lorber Studio Classics. Image quality is essentially identical, and the DTS-HD MA 2.0 audio provides able support for Laurence Rosenthal's fan favorite score. Extras include the standard U.S. trailer, an extended (almost six minutes!) trailer, and a "deleted final image," which makes for a more conclusive resolution and explains the otherwise abrupt and odd music transition to the end credits.