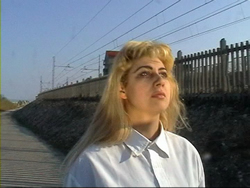 Sort of a mixture of 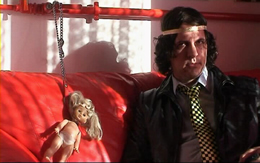 performance art, retro avant garde, and a love letter to exploitation cinema, the video work of the Italian director Flavio Sciolè often defies explanation but can do a serious number on your head if you watch it long enough. His output consists of numerous pieces that loosely fall under categories like "short film" and "feature," though the execution resembles more of an art installation than anything close to a conventional narrative. You can get more of an idea by visiting his YouTube page.

Three of his pieces are under review here courtesy of his private DVD editions, starting with one of his earlier works, "Delirium." Clocking in at barely over half an hour, it visually echoes filmmakers like Jean Rollin and Jess Franco (complete with recurring beach imagery, gothic gates, and retro fashions), but any pretense at a normal narrative is quickly chucked aside. It involves only three people, a predator wearing a garish tie (played by the director) and two women, one blonde and one brunette. It's often jagged and disorienting, turning the familiar images of European horror cinema into a psychedelic stew.

That's really an appetizer for his magnum opus, a sequel of sorts called "Mondo Delirium" made nine years later and running well over two and a half hours. Described as both "extremexperimentalexploitation" and an "anti-film," it features the return of Sciolè's character in a feverish melange of eerie landscapes, distorted music, 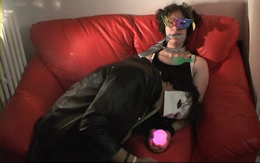 masks, and a larger cast this time consisting of Ella Dei Santi, Alessia Di Pancrazio, and Lilly Malatesta. The tone here is more anguished and sprawling, with a ritualistic repetition of images and sounds creating an air of, well, delirium. 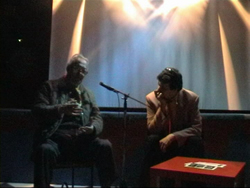 Shifting gears a bit we get to the brief (nine minutes) "Renato Polselli a Visioni Sconsigliate," a sort of interview with the late cult director of films like Black Magic Rites, Vampire of the Opera, and, yep, the 1972 Mickey Hargitay freakout Delirium. The influence of Polselli makes sense given the director's penchant for nonlinear fantasias loaded with colorful sex and violence, and the two share a discussion about the role of film, visual symbolism, and cinematic psychology underneath some moody, stylized lighting.

All three were shot on standard definition video and obviously don't look anything like a polished studio production, but if you're looking for something way off the beaten path that emphasizes mood and psychological associations along with disturbing lashes of horror, you'll find plenty to enjoy here.