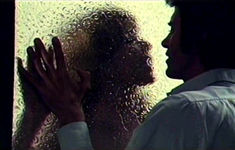 to power and the parallel story of Annette (Elga Sorbas), whose revolutionary romance directly leads to the assassination finale. While the story more or less follows the familiar Evita framework (Pinares has learned of her terminal cancer at the beginning of the film and engages in Machiavellian tangos with the Cardinal, aptly played by Anton Diffring), the gritty tone and strange, ultra-European ambiance yield completely different results. Christiane Kruger easily owns the film, murdering and seducing her way into viewers' hearts; the bizarre clash of accents and intricate story require more attention than usual from viewers, but Metzger fans should find it worth the effort.

The DVD from Image and First Run is derived from the same source used for the film's video release in Holland as Blood Queen. Inappropriate moniker aside (the original Little Mother title refers to the people's nickname for Marina), the print is good if not quite pristine. The image is free of any noticeable damage, while the color looks about as good as one could expect from a '70s European film. Not a demo piece, but at least the sound has been cleaned up dramatically from the warbly, distorted PAL version. A true anomaly in Metzger's career, Little Mother will surprise fans but provides some juicy food for thought and a few good cheap thrills along the way for good measure.

Something spooky is going on at the Glencliff Manor. In 1933, twenty years after the death of rich old Cyrus West, his relatives have gathered on a dark and stormy night for the reading of his will. With the aid of reliable Mrs. Crosby (Wendy Hiller), Cyrus himself (Wilfrid Hyde-White) appears to his heirs via celluloid and at long last reveals the distribution of his wealth. Some, namely the sweet and innocent Annabelle West (Carol Lynley), are overjoyed by the news, while others, like the bitchy Susan Sillsby (Honor Blackman), are less than enthusiastic. Trapped in the house overnight by the storm, the guests are informed by a mysterious visitor that a madman

has recently escaped from a nearby asylum. Nicknamed "The Cat," this lunatic uses claw-like appendages to attack his victims... and he may very well be hiding in the house.

A virtuoso adaptation of the classic 1922 play (most famous as a silent adaptation to film by Paul Leni in 1927), this underrated horror film, Metzger's only outing in the genre, would have a much better reputation had not been associated with all of the remakes and sequels prevalent in the late '70s. The Agatha Christie movie trick of using lots of notable British stars works extremely well here, with Blackman (Pussy Galore herself) taking top acting honors. Olivia Hussey looks nice but generally has little do as Blackman's presumably lesbian lover, and Lynley does fine as the naïve innocent heir (though both she and good guy Michael Callan seem a few years too old for their roles). The real stars of the film, though, are Metzger and the house; he obviously has great fun deploying every old dark house trick in the book and frequently plays with the conventions of cinema (particularly the will reading sequence and the delightful end credits). Beautifully shot and edited, the film soaks in spooky atmosphere, perfect for viewing on a dark, rainy evening, and good luck guessing the murderer's identity. A real pleasure from start to finish. Like most of the Metzger titles, this one shows some signs of wear, including more than a few speckles, but looks far superior to the awful, long unavailable VHS edition from RCA Columbia back at the dawn of home video. Letterboxed at slightly more than 1.66:1, the image quality looks fine but appears to be missing mild slivers on the left and right edges of the screen. In any case, it's great to finally have this back on video, and even viewers unfamiliar with Metzger's other films should find plenty of entertainment here.

Radley Metzger's last film to date, The Princess and the Call Girl originally debuted in the U.S. on The Playboy Channel but, as demonstrated by this release, was clearly designed to be shown in a theater. Like most of Metzger's films, the plot jumps off from a popular literary source (in this case, Mark Twain's The Prince and the Pauper, though credited to a French story entitled "Frontispiece"), using glamorous locales and sophisticated characters to give its eroticism that unique Metzger atmosphere.

The globehopping story concerns two identical former college friends (both played by Carol Levy) - one a naive rich girl engaged to a virginal preppy guy, the other a high priced prostitute skilled in the methods of manipulating the passions of a variety of men. The prostitute, Lucy Darling (!), accidentally overbooks herself and resorts to asking her friend to swap places for the weekend, a situation which rapidly spins out of control and leads to numerous comic consequences.

Of course, the climactic engagement party finds various attendees, including the identical women, hopping bedrooms and guests in an attempt to sort out the confused identities.

Cheerfully fluffy and consistently erotic without pandering to its audience, Princess sports a likable performance from Levy, best known for the terrifying knife in the mattress sequence in Jack Sholder's Alone in the Dark. She handles both roles quite well, though her wry, doe-eyed mannerisms take some getting used to, and she fits perfectly in with the tradition of classy Metzger heroines who smolder even when fully dressed. The rest of the cast does well, too, delivering Metzger's wordplay-packed dialogue with plenty of zest and wit. In the most typical scene, Levy exchanges cinematic bon mots with a movie buff client and nearly brings him to climax by naming several classic movie stars in rapid succession. The incessant disco score gets a little tiresome after a while but definitely adds some nostalgia value to the proceedings, while Loubeau's skillful camerawork nicely contrasts the visual textures of Park Avenue and the Riviera.

The Image DVD presents the same transfer from First Run's VHS edition, albeit in a crisper and more colorful rendition. Prior VHS versions back in the '80s looked awful, and while this was intended primarily for cable exhibition, the 1.66:1 framing here looks far more satisfying and balanced, lending the film a visual glossiness lost of previous versions. The actual print is still in less than pristine condition, with the opening sequence displaying some negative dirt and a small but pesky recurring tear which appears for a few minutes. However, this is still by far the most pleasing edition of the film, a sweet little valentine that, outside of his Henry Paris titles, stands as Metzger's funniest achievement. In fact, Princess in many ways is a fitting epilogue for the age of sexual freedom; they may not make 'em like this anymore, but as long as these films continue to be appreciated, viewers can relive the experience and have quite a few good, hearty laughs along the way.