While the first Meat Market was a scattershot, impressively ambitious attempt to marry Dawn of the Dead with a broader social satire, Meat Market 2 is in essence the same approach welded onto Day of the Dead; it's a nastier, grimmer, more claustrophobic piece of work, with the urban guerilla mentality combined with military tactics and a few jabs at infomercial media culture for good measure. 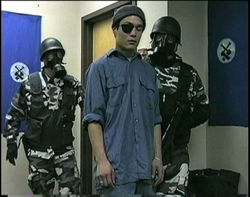 Two survivors from the first film, perpetual warrior Argenta (Westby) and omnisexual bloodsucker Nemesis (Therriault), are caught up in a world slowly being swallowed by the zombie plague. Human society splinters into a number of factions, with the largest one, RCANA, housed in a compound containing military officers and a charismatic motivational speaker, Bill Wilhelm (Rob Nesbitt), whose demonstrations involve zombies on chain leashes. Nemesis can't keep her fangs off an officer or two, but far worse are the Clockwork Orange-style brainwashing techniques used by the soldiers and the nutty Dr. Gehlen (Chuck DePape). Meanwhile the undead menace grows until all hell finally breaks loose in an orgy of gut-chomping and explosions. 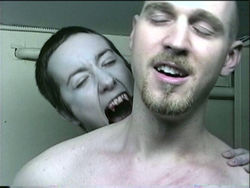 Once again Clement and his crew make the most of a budget in the area of two thousand dollars, yielding results far above what one might have any right to expect. While the actors have a few awkward moments here and there, the technical aspects of the film are impressive: the grisly make up effects, elaborate camerawork and editing, and expert pacing make for an entirely engrossing experience. The effective, multi-layered soundtrack also helps considerably, giving studio productions a run for their money. But be warned: if you have an aversion to maggots and gushing bodily fluids, approach with caution! 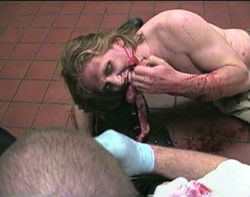 Sub Rosa's DVD carries on the elaborate treatment given to the first film. The transfer looks fine considering the micro-budget origins; the dubious decision to shoot a few hallway scenes under fluorescent lights results in a handful of bleached-out shots, but otherwise color and detail are pleasing. As with the prior film, some brief shots of genitalia were apparently trimmed; again, no major loss. The disc includes two commentary tracks; Clement and Westby take the microphone first along with makeup artist Paul Semande for a fairly technical track, comparing the process of making the film to the first one and explaining the ins and outs of crafting a production with minimal resources. Much looser and goofier is the second "bad guy" commentary with Nesbitt, DePape, and actors Dustan Roberts and Robin Thomson; they seem to be having a lot of fun reliving the film while detailing the process of crafting one's thespian craft while surrounding by gunfire and innards. An 18-minute documentary compiles some amusing behind-the-scenes footage, showing the creation of the special effects and climaxing with a funny bit involving one larvae-covered performer chomping on raw meat (and subsequently falling ill, not surprisingly). Other extras include the trailer, a promo for Clement's Binge and Purge, a tongue-in-cheek "RCANA Membership Game" featuring multiple choice questions, a still gallery, and a rather squishy Easter egg.

"From the depths of hell, the dead have returned to walk the earth!" proclaims the tagline for Meat Market, a shot-on-video zombie/gore outing whose obvious parallels to Dawn of the Dead extend far beyond its ad copy. However, those tired of the generic run-of-the-mill homemade horror product will be pleasantly surprised by some of the imaginative flourishes to be found in this skillfully crafted, fast-paced piece of nastiness whose rough edges don't conceal the obvious enthusiasm involved. 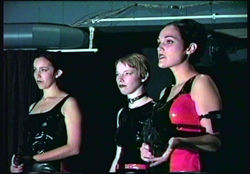 In the opening sequence, a woman pursued by a horde of zombies is saved by our two gun-toting antiheroes, Shahrokh (Paul Pedrosa) and Argenta (Claire Westby), who toss the near-victim a firearm for protection. The film then breaks down to an origin story beginning with "Week One" in faux-documentary style where, through a series of vignettes (some done in quasi-documentary style which provides a few amusing jabs at news programs and reality TV), we see the undead slowly taking over the city and feeding on the warm flesh available. At first police believe the disease is just a disorder, but soon it turns out the contagion stems from a medical corporation whose experiments have produced ravenous zombies. As society crumbles, the film tosses in a trio of vampiric lesbian gun freaks, sex scenes, some hilarious gratuitous nudity, and a zombie-slaying Santo. Honest. 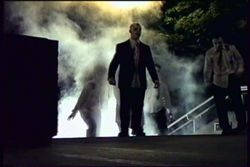 Thanks to its piecemeal construction, the strength of Meat Market lies mostly in its incidentals. When a dialogue or driving scene threatens to overstay its welcome, director Brian Clement (Westby's boyfriend) throws in a quirky touch or surreal image to keep the viewer off balance. The pure zombie imagery works best, include a stunning tracking shot through a nocturnal parking deck under siege, flooded with smoke and shuffling zombies picking off anyone in their way. The standard badass gunplay is really the film's biggest weakness; a longstanding element of post-Tarantino '90s low budget films, the assumption that tossing guns into characters' hands makes them cool is starting to wear pretty thin. Fortunately there are those vampires and the Mexican wrestler along for the ride to keep things interesting... Also, bonus points for the most stomach-churning closing credits in recent memory. 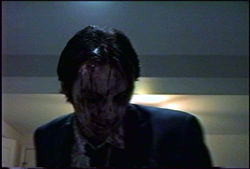 In keeping with its commitment to anti-PC underground filmmaking, Sub Rosa presents Meat Market in a squishy special edition containing a transfer about on a par with what you would expect (clear and crisp but dogged by some inconsistent lighting and other flaws in the original elements). For some reason the shades of blood range from red to off-purple, but this also looks carried over from the shooting conditions. Audio is generally well recorded and presented, though the occasional line of dialogue can be muffled. Clement and special effects supervisor Nick Sheehan provide an audio commentary largely concerned with the technical production aspects of the film; they're both fairly low key but keep chatting consistently without any gaps of silence. They also offer a few amusing insights into the themes of the film, some of which seem more reasonable than others. (Check out the dual shower scene commentaries for a chuckle or two.) The disc also contains a trailer and photo gallery, while Easter egg hunters can also find an amusing zombie outtake from the film.