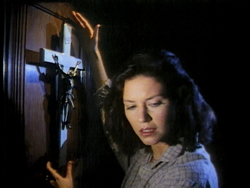 When Sean (Robin Ward) decides to sell his family home out in the snowy countryside, the change doesn't sit too well with his identical twin brother, Michael (also Ward), who's been sitting in an asylum for fifteen years after nailing a girl to a tree. Sean and his wife, Dale (Crewson), find their lives flipped upside down when they get to the house to get in into presentable shape, only to have an angry Michael bust out of the booby hatch and come for revenge. Soon one brother 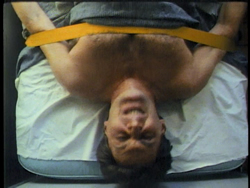 's unconscious on the floor and headed back for the snake pit under the watch of Dr. Clifford (Parr), but Dale begins to suspect that something's amiss...

Before he pulled out all the stops with Hello, Mary Lou: Prom Night 2, director Bruce Pittman cut his teeth on this minor but entertaining shocker complete with stylized dream/flashback sequences hinting of his work to come in that madcap "sequel." Though he never became a particularly noteworthy thespian, former Canadian TV weatherman Ward actually does a pretty good with the challenging role of both brothers, while Crewson is an effective damsel in distress (particularly during the lively climax). Perhaps the most memorable aspect is the desolate, wintry nature of the whole project, similar to the isolated and ice-covered atmosphere of other '80s Canadian horror outings like Curtains. Sure, it's basically disposable fare designed to fill up cable time late at night, but you 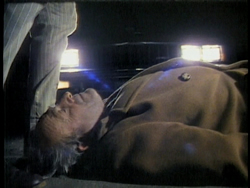 could do a lot worse.

Shuffled off to VHS from Vestron back in the '80s, Mark of Cain (which is actually titled The Mark of Cain on the print) is one of those unlucky films whose indie distribution status has led to extreme neglect over the years. The master used here has obviously been around for quite a while, looking like it stepped off of a Cinemax broadcast circa 1988, though at least it has actual colors (which is more than you could say for the Vestron tape). It's pretty gritty and dated in visual terms, which may actually be weirdly appropriate considering the nature of the actual film itself.

And now on to our second feature... When she isn't busy by day as a computer game programmer, smart and unethical cookie Carly (Reis) spends her time siphoning 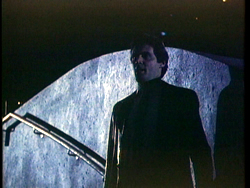 money out of bank accounts thanks to her dial-up hacking skills. However, when she decides to make a getaway after stashing the location of her ill-gotten funds inside her latest computer game called Thrillkill, Carly gets bumped off just before she can reveal the secret to her sister, Bobbi (Massey). Her accomplices aren't too thrilled about any of this, especially a femme fatale named Toni (The Pink Chiquitas' Robinson), and a dogged detective named Gillette (Ward again) starts to investigate as Bobbi's life seems to be in danger. Soon everyone's double crossing everyone else, the bodies are piling up, and no one can be trusted. 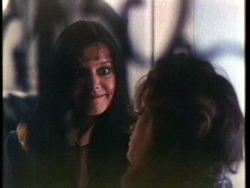 cally a redo of the classic Stanley Donen thriller Charade with some '80s video game dressing, Thrillkill is a prime example of Canadian tax shelter filmmaking during its waning days, complete with big hair, big computer monitors, and really big plot holes. The story becomes nearly indecipherable by the time the plot twists begin piling up at the end, but the dark and smoky ambience and Ontario attitude will make this a serious guilty pleasure for those who like their technology from the Atari era. The video game sequences have a deliciously cheap, retro quality more suited to a shot-on-VHS music video, so if you're game for a lo-fi obscurity like this, by all means indulge.

Once again the transfer has been taken from what appears to be a master lying around since this thing premiered on VHS back in '87 (and was probably shot a couple of years earlier by the looks of it). It's open matte and looks very dated (pretty similar to the DVD releases of Tales from the Darkside), so adjust your expectations accordingly. Both are presented as part of the Katarina's Nightmare Theatre line, with hostess Katarina Leigh Waters juicing up the proceedings with shorter-than-usual intros in which she talks a bit about the glory days of Canada's genre factory in the '80s and some of the better known performers (relatively speaking) on hand. You don't get trailers for either feature (no surprise), but other ones are included for titles like Humongous, Final Exam, and House on Sorority Row.