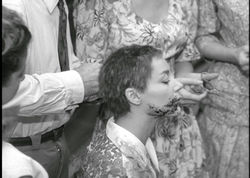 narrative; for those with a taste for emotionally rich New Wave filmmaking, however, this is an endlessly fascinating reverie of a film.

A nameless French actress (Emmanuelle Riva, later in Venus Beauty Institute and Krzysztof Kieslowski's Blue) meets a Japanese architect (Eiji Okada) while surveying Hiroshima for an anti-war public service announcement. The two begin a passionate and physical affair which also triggers powerful memories and emotions, as both must work through their devastating pasts: his experiences at Hiroshima, her ill-fated romance with a German soldier during wartime. Together they begin a tentative but perhaps short-lived healing process. 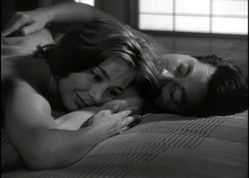 Visually stunning and cinematically fascinating, Hiroshima Mon Amour proved to be one of the more influential New Wave films, triggering both socially conscious protest films and, on a more commercial front, the non-linear "relationship" romances which became a cottage industry for Claude Lelouch (A Man and a Woman). However, its continuing critical status as Resnais' best film seems mostly due to good timing; the antiwar sentiments proved highly resonant in a few years with the arrival of the Vietnam War, while Duras' introspective feminism ensured its place in gender studies classes for decades to come. Seen today, the film feels more remote and unsure of itself than even a decade ago; in fact, Resnais' subsequent Last Year at Marienbad has aged more gracefully and, considering the rise of postmodernism and the rapturous embracing of style for style's sake, may now be the more relevant and influential of the two. At least aesthetically Hiroshima hasn't aged a bit; the rippling camerawork of the great Sacha Vierny still looks dazzling (with an assist from Japanese cinematographer Michio Takahashi), while the austere score by Georges Delerue and Giovanni Fusco provides elegant accompaniment. 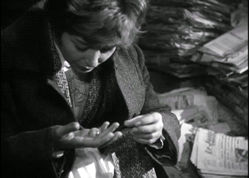 glossy presentation on Criterion's DVD. The superb interplay of shadow, water reflections, and metallic surfaces which gives the film is haunting visual sheen is now as it should be, and the optional subtitles are now finally legible, no longer disappearing against white surfaces as in the past. Film historian Peter Cowie provides a dry but informative commentary track in which he traces the historical development of the film and its social relevance at the time; a third audio track contains an isolated music and effects track (pine no more, soundtrack fans!). Resnais is represented by two interviews, a 1961 discussion with Cinepanorama and a later 1980 audio-only interview; he talks about Hiroshima in both but from obviously very different vantage points, which makes for an interesting comparison. An archival interview with Riva from the 1959 Cannes Film Festival is included in which she discusses how she explored the complexities of her character. Text extras are abundant: Duras' annotations to the screenplay (which is very similar to the finished product), a Kent Jones essay on the influence and symbolism of the film, and Russell Lack's written overview of composer Fusco.

Art cinema in the 1960s was a strange, wonderful quirk of film history. While directors like Truffaut and Godard regularly flourished with a stream of challenging masterpieces, other gems also managed to slip through into the American consciousness in ways unimaginable to modern audiences weaned on Miramax's flavor of the month. Alain Resnais' elliptic Last Year at Marienbad, arguably the quintessential example of a near-plotless art film, caused an icy shock wave on its original release, though its reputation has suffered mostly due to a checkered history on video beginning with awful pan and scan transfers from companies like Video Yesteryear (which sliced the elegant Dyaliscope compositions into senseless visual squares). Connoisseur issued a widescreen release on VHS in the early '90s, but this grainy, green-tinged transfer failed to convey the sensuous, glittering surfaces which drift through every shot. Fox Lorber has now issued what could very well be the definitive Marienbad in a lustrous new DVD transfer whose virtues as eye candy should even please viewers who dismiss the film itself as pretentious game-playing boredom. This is simply one of the most beautiful black and white DVDs to date, and the delicate Dolby Digital soundtrack delivers the music and sound effects far more clearly than ever before. The English subtitles (positioned at bottom of the image, alas, unlike the Connoisseur subtitles in the lower band of the letterboxing) are optional, allowing the viewer to remove the words and savor the film for its visual power alone.

Most importantly, Marienbad marks the union of three major French talents: French writer/director Alain Robbe-Grillet, whose script here remains his mostly widely familiar contribution to world cinema despite his direction of such kinky art house gems like Trans-Europe Express and La Belle Captive; director Alain Resnais, fresh off his success with the international favorite, Hiroshima Mon Amour; and brilliant cinematographer Sacha Vierny, whose work on Hiroshima explodes here into a riot of stunning widescreen tracking shots and deep focus compositions which continually engage the eye and the mind. Not surprisingly, Vierny went on to top himself again with director Peter Greenaway by lensing the jaw-dropping painterly images of The Cook, the Thief, His Wife, and Her Lover and Prospero's Books, among others.

Any attempt at a narrative summary of this film is inadquate, as Robbe-Grillet intended it as an intelluctual puzzle open to each viewer's interpretation. At a chic spa for the well to do, Giorgio Albertazzi approaches the beautiful, detached Delphine Seyrig (Daughters of Darkness) and informs her that they had an affair a year ago, "at Frederiksbad or perhaps Marienbad." She claims not to know him, and as the games at the resort accumulate (ranging from cards to rifle target practice), so do Albertazzi's attempts to convince the object of his desire that they have met before. Meanwhile, fellow player Sacha Pitoeff (who later wound up drowning cats in Dario Argento's Inferno) intercepts as Albertazzi vies for Seyrig's attentions... or does he? Events grow increasingly dazed, becoming alternately romantic and nightmarish, as Vierny's camera continues to rove and prowl over each luscious piece of furniture, the marble steps, and the glittering chandeliers. A haunting, truly unique work of cinema, certainly not for all tastes but definitely worth a try for the adventurous. 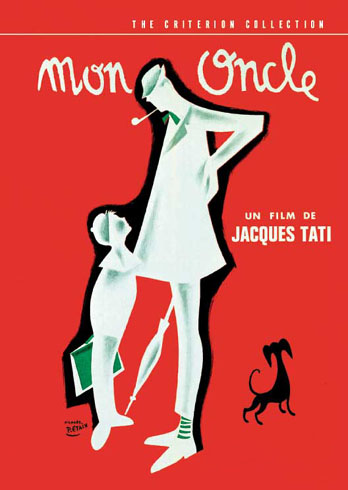 Resnais was all the rage in the '60s with his brain-teasing visual puzzles, but his style transformed over the years as he took increasingly tremendous amounts of time to work on each project before finally settling into apparent retirement. With Mon Oncle d'Amerique (or My American Uncle), Resnais collaborated with renowned psychologist Henri Laborit (who also appears in the film) to produce a discerning, often hilarious study of human behavior and its consequences. 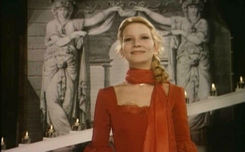 The delicate chain of cause and effect concerns three people and their struggles to achieve happiness and equilibrium: Rene (Gérard Depardieu), a businessman faced with the impending threat of being laid off; Janine (Nicole Garcia), an actress who must decide on the proper moral choice when her lover's wife becomes terminally ill; and Jean Le Gall (Roger Pierre), an ambitious, politically motivated executive and writer slammed with an early midlife crisis. All of these stories revolve around the concept of a (fictitious?) American uncle, a symbol of the idealism by which a benevolent force will arrive and solve everyone's problems.

More recognizably human and witty than some of Resnais' past films, this fragile little treat replaces his trademark visual flashiness with a wry look at the depths of man's soul, which isn't quite the perilous trip one might imagine. Resnais' usual cinematographer, the amazing Sacha Vierny, works his usual alchemy here, transforming hallways, kitchen, and offices into striking visual tableux, while incorporating organic depictions of nature to mirror the film's themes in a manner similar to his later work for director Peter Greenaway,

particularly A Zed and Two Noughts. New Yorker's DVD is derived from the same master as their previous videotape version. The full frame image looks well composed but may be marginally cropped from a 1.66:1 aspect ratio. The burned-in yellow subtitles are easy to read but sometimes smear onto the image. The transfer itself is a rather chalky, grainy affair; detail levels are acceptable but not impressive, and colour levels look adequate if somewhat chalky. The rather overpriced disc also includes a Resnais filmography and print interview, as well as a well chosen reproduction of the original poster art on the front of the packaging.