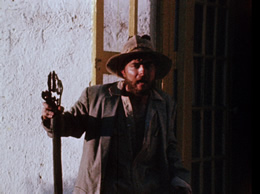 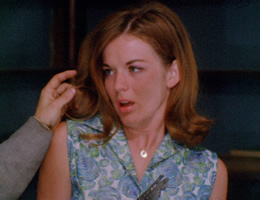 Arguably the greatest contribution to pop culture achieved by Mystery Science Theater 3000 was the discovery of Manos: The Hands of Fate, a little-seen horror indie made in Texas by insurance salesman Harold P. Warren on a sort of bet with Hollywood writer Stirling Silliphant when he was in town. The film's local premiere was a complete disaster, and it was quickly consigned to triple bills by low-rung distributor Emerson Film Enterprises (Mondo Hollywood) before vanishing from sight. Of course, the public domain title eventually found its way to infamy courtesy of Joel and the Bots in 1993 as fodder for the most outrageous and oft-quoted episode of the entire series, surpassing even such gems as Time of the Apes. Demand rose for the film in its original, mock-free form, and soon PD copies were popping up everywhere from a super-cheap DVD from Alpha Video, an episode of the revived Elvira's Movie Macabre, and other iterations from dubious bargain bin companies. Taken on its own terms, this is hardly the "worst movie ever made;" it's way too strange and memorable for that label, fitting nicely with the idiosyncratic regional horror vibe that was going strong at the time and would last well into the 1980s. It's also hilarious on its own, though complicating matters is the fact that some of the humor (as betrayed by the goofy soundtrack) was definitely intentional. In any case, the film always looked horrendous on TV and home video until a restoration project was undertaken, salvaging nearly extinct film material to present the film in the closest thing to pristine condition possible.

The threadbare story follows the misadventures of an all-American family - dad Michael (Warren), mom Margaret (Mahree, aka Diane Adelson), and Debbie (Jackey Neyman) - who wind up spending the night at a forbidding house in the Texas desert when they get lost. The house servant, Torgo (Reynolds), insists that "the Master" would not approve of them staying over, but Michael 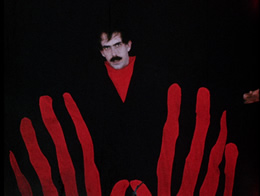 strong arms his way in anyway. Sinister events abound as the family's pet poodle meets a nasty feet, Torgo makes a pass at Margaret's hair, and the Master himself (Tom Neyman) finally rears his head wearing black robes emblazoned with giant red hands. In fact, the whole place has a hand theme going on, and the Master loves to preside over ceremonies with his harem of wives in white gown (who tend to wrestle with each other when things get heated). Naturally, it does not all end happily. 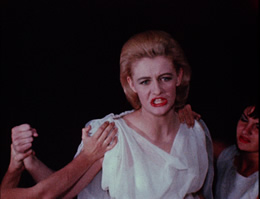 Shot with a single camera capable of shooting just over 30 seconds at a time, Manos still feels like a transmission beamed from an oddball planet with ways vaguely similar to our own. In the grand tradition of Doris Wishman, it was also shot without sound and looped later, complete with an adult woman voicing little Debbie in a falsetto a la House by the Cemetery. The somnambulistic acting probably wouldn't have fared much differently with live sound, but the disconnected soundtrack just adds to the strange atmosphere, making this the ideal title to pop on at 2 a.m. when your resistance to its peculiarities might be reduced.

The restoration of Manos became something of an online sensation with fans chipping in via a Kickstarter project. The difference in quality between this presentation on Synapse's separate Blu-ray and DVD editions is remarkable given the history of the film, with additional image info and far, far more detail visible throughout. There's some inherent damage in the negative on some shots (evidently created in camera since it varies from shot to shot), but that's part of the original work and left here intact. The DTS-HD MA two-channel English mono track is... well, as good as the film could possibly sound, with its tinny easy listening/experimental jazz soundtrack preserved in all its abrasive glory. Optional English and Spanish subtitles are provided, and in the first of several extras, there's also a fun audio commentary by Tom Neyman and Jackey Neyman-Jones, who were apparently estranged for quite a while until the time of the restoration. They have a good time looking back on the film and discussing the odd production process, which often left them adrift trying to find ways to fill their time on screen. Technically the film runs 69 minutes, but there's a five-minute reel of special thanks for the restoration project to 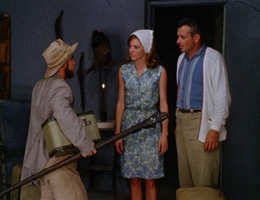 The release also comes with three featurettes produced by Ballyhoo Pictures, kicking off with the 30-minute "Hands: The Fate of Manos," which is structured around a history of the film delivered by Benjamin Solovey (who was behind the film's restoration, itself a bizarre story on its own). Interspersed are recollections from Neyman and Neyman-Jones, Bryan Jennings (son of actor William Bryan Jennings, the sheriff), Diane Adelson (billed in the film as Mahree), and still photographer Anselm 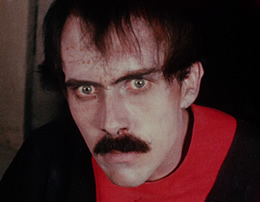 Spring, who address everything from the rumors about Torgo (yes, at one point his goofy legs were supposed to be those of a satyr, and Reynolds was indeed stoned much of the time) to the lack of direction, the catastrophic premiere, the inebriated four-hour editing session for the entire feature, and the one voice actress who provided every single female voice in the film. The 6-minute "Restoring the Hands of Fate" features Solovey going into more detail about how the film was preserved and why it was scanned in 2K, which closely approximates the resolution of 16mm film and offers the best representation of this particular film's original appearance. Finally, the 4-minute "Felt: The Puppet Hands of Fate" features writer/producer Rachel Jackson explaining the history behind her puppet production of the film complete with a muppet reenact ion of the wife fight. Obviously, you need this.