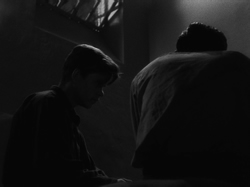 One of France's most respected and least prolific directors, Robert Bresson is regarded now for a string of remarkably consistent, superb films made ov 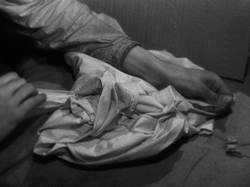 er a four-decade period. Much has been made of the spiritual aspects of his film and his fondness for using non-professional actors (or "models" as he called them) in his films, and both can be seen at their peak in one of his undisputed masterpieces, A Man Escaped (original, much longer title: Un condamné à mort s'est échappé, ou: Le vent souffle où il veut). The film is based on the true memoirs of Resistance fighter André Devigny, who was imprisoned by the Gestapo and plotted a long, meticulous escape using materials around him.

The combination of methodical planning and spiritual gravity proved to also be the driving force behind this film version, which carefully recreates the original prison settings but fictionalizing the main character's name as Fontaine, here played by philosophy student Leterrier (who went on to direct several films including, incredibly enough, Goodbye Emmanuelle). As the clock counts down to his day of execution, he never sways from his involved plan to break out of the prison -- and he also serves as an inspiring example to his fellow prisoners, some of whom contribute to his efforts.

A subtle but intensely powerful film, A Man Escaped has continued to grow in stature in recent years thanks to its more widespread availability on home video. For many years it was somewhat difficult to see in a decent transfer, wit 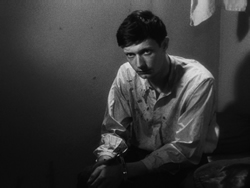 h New Yorker issuing it in America on both VHS and DVD in a pretty drab transfer. Around 2008 it began to appear in fresher presentations from companies like Artificial Eye in the UK and Kinokinuya in Japan, with more frequent repertory screenings also boosting its reputation. Now that most of Bresson's work is readily available again, it's easier to appreciate the film as the 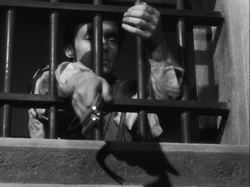 vital link between his more meditative, optimistic earlier films Diary of a Country Priest and his more pragmatic, bittersweet later classics including Pickpocket, Au Hasard Balthazar, Mouchette, and his final film, L'argent. Of course, it's also fascinating to now see how this film's influence spread into Hollywood culture, albeit a little under the radar, in such productions as Papillon, The Shawshank Redemption, and TV's Prison Break, as wildly different as those end results might be in the end.

An excellent 2010 Blu-Ray release came as something of a surprise from Gaumont in France, complete with a new HD transfer, optional English subtitles, and no region coding (as well as a 45-minute documentary on the director, "L'essence des formes," sans subtitles). The 2013 Criterion edition (available on both Blu-Ray and DVD, but go for the hi-def if you can) easily beats it in the extras department and even nudges past the already satisfying transfer with a little extra encoding care, detail, and shadow depth. It's hard to imagine this looking any better.

As for the extras, we kick off with the 1965 TV show Cineastes de notre temps (a familiar name from prior Criterion French-oriented releases) courtesy of "Bresson: Without a Trace," featuring Bresson's first on-camera interview (in between the releases of The Trial of Joan of Arc and Au Hasard Balthazar). He talks a great deal about his techniques including his methods for choosing actors in his films, a topic also covered in the next substantial extra, "The Road to Bresson." This 1984 documentary (previously seen on the Artificial Eye release) running just under an hour and featuring such admirers as Louis Malle, Paul Schrader, and Andrei Tarkovsky, which Bresson himself proving elusive in what amounts to the running narrative thread of the film. "L'essence des formes" reappears here with English subtitles this time, including some welcome input from Leterrier as well as numerous other collaborators and disciples. (The title here is Anglicized as "The Essence of Forms.") Finally we round out with the theatrical trailer and a Criterion-produced visual essay, "Functions of Film Sound," with contributors David Bordwell and Kristin Thompson exploring how the spare but effective soundtrack contributes to the film's suspense and reinforces its metaphysical themes. A lengthy, excellent essay by film writer Tony Pipolo is also included in the enclosed booklet, featuring some fascinating notes on the differences between the film and its real-life inspiration. A marvelous release all around and highly recommended.