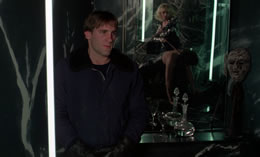 Dada, More, and Reversal of Fortune, he turns his eye here to a peculiar love story that plays like Story of O reworked by Francois Truffaut. Depardieu stars as Olivier, a good-natured thief who, with the aid of an old friend, enters the lavish, modernist apartment of Ariane (Ogier) due to complaints of broken plumbing. She explains that the apartment below is vacated, so Olivier plots a robbery for that night. Upon breaking in, Olivier is astonished to 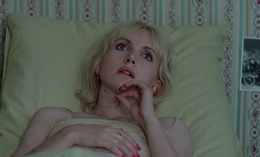 Easily one of the strangest romances ever made, Maîtresse can't really be classified as an "erotic" film in that there's no traditional sexual activity on display. However, while the basic story trajectory is fairly traditional, there's quite a bit of extreme content that rears its head at unexpected moments, such as a visit to a horse meat factory, a man's genitalia graphically pinned to a chair (years before Schramm), and a bourgeois B&D party at a country home. Schroeder wisely has Ogier don a black, Louise Brooks-style wig for the film's most explicit movement in the middle of the film, allowing a real dom to convincingly serve as her stand-in for some of the more, um, sensitive moments. With its detached approach and cool, sleek visual style as counterpoints to "deviant" sexuality, the film is a fascinating precursor to David Cronenberg's Crash (with which this also shares a similarly resonant finale); both films are also darkly funny, presenting quirks of the human libido as an idiosyncrasy society just isn't quite equipped to handle yet. Schroeder nicely contrasts Ariane's austere, futuristic S&M chamber with the Parisian warmth outside, creating two wholly different but convincing 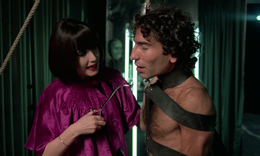 worlds. While Depardieu doesn't have much to do here besides looking concerned and befuddled, Ogier (also in Schroeder's excellent The Valley) is a striking, memorable presence here; she remains intriguing without being directly menacing, regularly altering her appearance but always carrying a hint of vulnerability.

Both Criterion and the BFI debuted virtually back-to-back DVD releases of this film during the weeks bridging 2003 and 2004, with the latter marking the first BBFC-appro 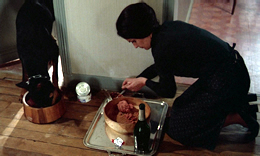 ved presentation of the film in the UK. Continuing to tread in more dangerous waters than many studios would attempt, both labels presented Maîtresse on DVD in a fine anamorphic presentation, bringing out the searing neon hues and glittering metallic surfaces of Ariane's workplace with admirable clarity. The Criterion's sole extra is a worthwhile one, a 19-minute video interview conducted in 2003 with Schroeder at his home in New York. He talks about his early career before discussing about the film at hand, explaining how it fits into his continuing fascination with wanting to look in people's apartments and study what's really going on, both on the surface and in the darker hidden places everyone seems to hide. For some reason the Criterion disc went out of circulation a few years later and, as of this writing, remains discontinued.

On the other hand, the BFI revisited this volatile film in 2012 for a dual-format release containing a Blu-Ray and DVD, both from a new HD transfer. It's quite a beauty, maintaining the usual perfect 1.66:1 framing and conveying the sleek, dark compositions with beautiful clarity. The colors are beautifully intense when they should be, especially the jolting violet of Ariane's cloak and the steely cold blues of her chic work chamber. The optional English subtitles appear to be the same as the prior release but are much more reasonably sized, and the PCM French mono track sounds great but really only has basic dialogue and occasional sound effects to handle. The main video extra on the BFI release is "Domestic Masochism," a new HD 28-minute featurette with goth scholar Dr. Patricia MacCormack and PhD candidate Edward Lamberti go into detail about the film's censorship history, the odd relationship of sadism to masochism in film, and some of the more pivotal scenes and how they reflect on real-life practitioners. Some of the observations are actually quite fascinating, and it's a good breakdown of a film that might seem baffling to some unprepared viewers. The original trailer for the film is also included along with bonus trailers for Schroeder's More and The Valley (Obscured by Clouds). The package comes with a liner notes booklet containing additional comments by MacCormack (some dovetailing into her remarks on the video piece) as well as a new text interview with Schroeder (who sort of walks through the film and points out why certain scenes are the most important) and a piece by the BBFC's Craig Lapper about the film's odd path to uncut status.