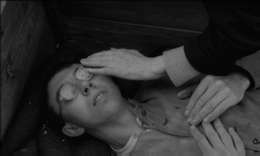 Long before he made his 1983 feature debut with The Hunger, director Tony Scott (or "Anthony Scott" as he's billed here) cut his teeth on short films and numerous television commercials, often with the involvement of his brother and fellow director, Ridley. His first long-form creation, Loving Memory, received its share of acclaim in 1969 and was even selecetd for the Cannes Film Festival's Critics Week, but few have had the opportunity to see it since as the one-hour running time makes it difficult to pigeonhole. However, this haunting slice of English countryside gothic has been revived from oblivion as the main attraction in the BFI's dual-format Blu-Ray/DVD release and makes for a fascinating demonstration of what was to come. 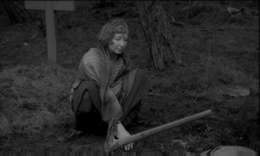 After striking an innocent young, bespectacled bicyclist (The Sex Thief's Pugh) and killing him with their car, two middle-aged siblings (Greenwood and Evans) fail to report the incident to the authorities. Instead they take the body home with them where, tucked among a roomful of clutter, they play dress-up and perform solemn rituals involving the creation of a coffin as the sister slips away from reality and confides everything to her new, quite deceased lodger.

An interesting actress usually seen in colorful small roles in many TV series as well as occasional films like Curse of the Demon and Village of the Damned, Greenwood really excels here with a heartbreaking and downright spooky portrayal that should have led to bigger and better film work. All of the participants are quite fine, but she's really something else and makes a perfect subject for cinematographer Chris Menges, who started off with the legendary The War Game and went on to everything from The Killing Fields to The Reader. As for Tony Scott, you can see traces of his more "artsy" experiments like The Hunger, Domino, and Revenge (as well as True Romance, sort of) in the carefully composed rooms piled with debris filtering bright shafts of light as a visual reflection of the characters' fascination with death. What's very unlike his later work is the stunning landscape photography, which betrays the influence of fellow directors like Ken Loach. 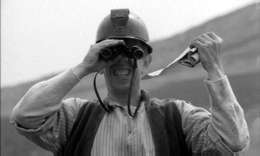 Two very significant shorter films are also included here, starting with Tony Scott's second credit, 1971's "One of the Missing" (which was actually shot in 1968 but not officially screened until later). This very harrowing 27-minute mood piece features a Confederate soldier (Stephen Edwards) pinned underneath the stone building caused by a collapsed building due to cannonfire, with his loaded gun wedged in front of him and poised to go off at any minute. Based on a story by Ambrose Bierce ("An Occurrence at Owl Creek Bridge"), it's a tense, taut, memorable little bit of abuse on the audience's nerves not easily forgotten. Then Ridley comes up to bat with the most familiar title in the set, 1965's "Boy and Bicycle." This 27-minute short was 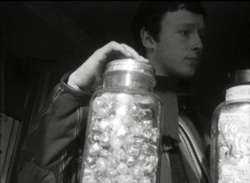 widely shown at festivals and has been included in several director's shorts collections over the years; not surprisingly, Ridley was already quite the visual stylist way before his first film, 1977's excellent The Duellists (whose DVD also featured this as an extra in a lesser transfer). This nearly plotless gem follows a 16-year-old schoolboy (Tony Scott, here on the other side of the camera) cruising around on his bicycle through his seaside town, all seen through the perspective of his adolescent psyche.

All three films were funded by the BFI, with Loving Memory definitely surviving the ravages of time most successfully. The HD transfer here is a pure knockout from start to finish, with exquisite detail visible even in the smallest crevices of the many striking long shots of the countryside. It's really beautiful and once again demonstrates how mesmerising monochromatic photography can be on Blu-Ray. The other two shorts (presented full frame as they were originally shot) definitely look grittier with more obvious damage, but the HD presentation is still very respectable and superior by to the presentation of most vintage shorts. Also included is a worthwhile liner notes booklet containing a perceptive and sometimes cheeky overview of the Scott brothers by novelist/film writer Kim Newman, a vintage Time Out interview with Tony Scott about Loving Memory, a Christophe Dupin essay about the Scott brother's relationship at the BFI who played a major role starting their early careers, and a segment of the original "Boy and a Bicycle" shooting script.