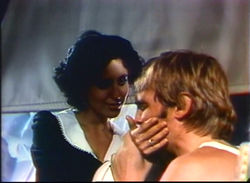 film genre, the '70s adult film Through the Looking Glass plays like a particularly deviant homage to Fellini, Ken Russell, Roger Vadim, and about a dozen other European directors, all served up in the context of a genuinely creepy horror film. Our fairy tale gone bad centers around beautiful Catherine (Catherine Erhardt), a wealthy, sexually repressed woman enduring a sexless marriage to Richard (Douglas Wood). At their remote country estate she begins to pass the time by sitting in front of an ornate, antique mirror, which happens to contain a green-skinned demon (Jamie Gillis) who drags her into occasional romps through a series of supernatural realms. From trysting with another woman in a room filled with silver, glittering fabric to a lavish garden party where the guests enjoy a particularly obscene centerpiece, Catherine loses herself in decadent fantasies which separate her even further from reality. After learning the backstory behind her sexually voracious demon, Catherine is finally torn all the way through the mirror for a nightmarish finale, with a little twist in the tale waiting at the end. 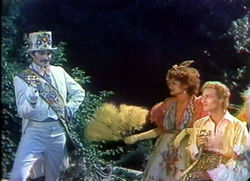 If ever a film of this genre and vintage demanded a sparkling new digital transfer, this would be it. Unfortunately VCX's DVD recycles what appears to be the same blearly one-inch master sourced for the long discontinued VHS edition; black levels are 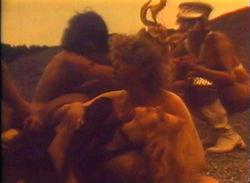 especially weak and detail is soft, to be generous. Colors are generally acceptable and accurate, but that's about it. Compression artifacts are abundant, particularly the orange-lit finale. Unfortunately this remains the only widely available viewing option for the film, so those curious would be advised to watch it for the film itself, not for the DVD quality. The disc contains chapter stops and no extras. Incidentally, at the same time VCX also released another oddball '70s title, 9 Lives of a Wet Pussy Cat, the directorial debut of none other than Abel Ferrara (Ms. 45, Bad Lieutenant), who, uh, "performs" in the film as well under his Driller Killer pseudonym, "Jimmy Laine." Composer Joe Delia also got his start here under his real name. Video quality of this title is excellent and surprisingly crisp, indicating VCX may have sprung for a new transfer.