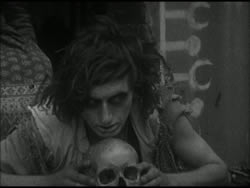 A daffy two-disc collection unlike anything else you've ever seen, The Lacey Rituals takes its name from a 59-minute film of the same name made in 1973 by Bruce Lacey, one of England's most longstanding eccentric comic minds, along with his family. Essentially a reaction to the heightened drama of narrative films, this funny, candid, and oddly experimental peek into the daily routines of the Laceys covers the course of a day from waking up to going to bed, with all of the casual rituals in between. If that sounds dull, well, it's definitely not; there's a puckish humor at work here that explodes through the rest of these films, all of which involve Bruce Lacey in some aspect or another.

The '60s explosion of counterculture art was a natural fit for Lacey, who found himself affiliated with everyone from the Goons (with Peter Sellers and Spike Milligan) to the Fairport Convention. The first DVD begins with a selection of "Early Films" starting in 1951 with "Head in Shadow," a bizarre piece of nonverbal surrealism about a blind man (Lacey) stumbling through a colorful cast of characters on the streets of London as he tries to figure out what's inside a package he found abandoned in the gutter. The first of several films made with experimental director John Sewell, it's surprisingly out there for its time and anticipates some of the wilder works to come in the following decade. Sewell's "Agib and Agab" is a more overtly funny piece of work but completely devoid narrative, basically a string of incidents and compositions that plays like a student film on LSD. The third film is easily the most famous of this batch: "The Running Jumping & Standing Still Film," the first non-television film from director Richard Lester (who went on to A Hard Day's Night and Help!, the latter featuring Lacey in a very memorable supporting role). Again this is more a collection of random goofball performances than any kind of narrative, with Sellers and Milligan taking part in the whirlwind of changing costumes and silly behavior out in the countryside, a template that would become familiar later in some of Monty Python's blackout sketches. The very brief "Battle of 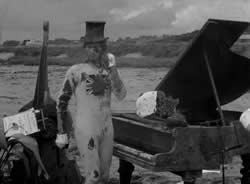 New Orleans" depicts a four-minute clash between three men thrashing around in the mud in Union Jack shirts. The last Sewell film on this disc, "Everybody's Nobody" from 1960, displays Lacey's growing fascination with robotic 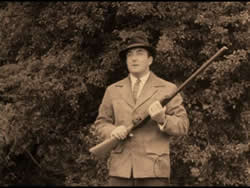 constructions as he himself plays an engineered "M.A.N." going through a series of comic but weirdly disturbing scenarios culminating with him becoming a lawyer and then wearing a dunce cap. This one easily makes the msot interesting use of black and white (the standard format for these early films), using fragmented compositions of body parts and props to create a strange collage of the human form in pieces. "Uncle's Tea Party" (with "the Two Alberts" and shot "in glorious grey and white with the latest dustcoated bi-focals for use on all animated lanterns") is a frantic silent film done in a 1920s style complete with pie fights and doggie jokes, featuring subversive comedy group the Alberts. Finally the 1965 "One Man Band" is the elaborate of the early shorts, directed by animator Bob Godfrey with Lacey as a one-man band (obviously) on the streets whose private fantasies turn him into a prestigious conductor. Complete with some truly dynamic editing (including creative use of still frames) and some wild sight gags, this is a fascinating look at fame both real and imagined with a healthy dose of pure insanity.

The rest of disc one closes out with the longer and more overtly avant garde Human Behaviour films section, containing four titles spanning from 1967 to 1975. "Kissing Film" features a close up of Mr. and Mrs. Lacey demonstrating the obvious, including the use of food props that might come as a surprise to some viewers. "How to Have a Bath" performs a similar function as you get both female and male illustrations of a daily activity, shot with a weirdly dispassionate eye that wouldn't be out of place in a later Peter Greenaway film. The aforementioned "The Lacey Rituals" is the longest and most elaborate of them all, of course, and it plays a bit differently now in the aftermath of years of reality television transforming the mundane into the stuff of sensationalism via Big Brother and its 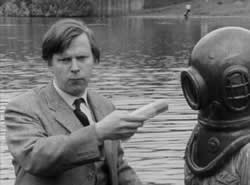 ilk. Finally the three-minute "Double Exposure" single handedly justifies the package's 18 rating ("contains strong sex") as the separately-filmed Mr. and Mrs. Lacey unflinchingly demonstrate the act of lovemaking without actually touching, a wild cinematic feat that manages to take a potentially explicit subject and turn it into something completely alien. 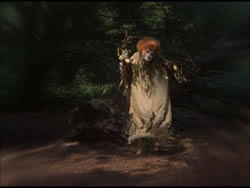 (a 1965 piece of goofiness about man learning to fly, sort of, presented in two different edits with totally separate endings), Sewell's "The Humanoid Race" (a jagged look at toy robots and other ephemera transforming with a man emulating the same), "Universal Integrator" (a very brief mechanical demonstration with a twirling device mixing up human and robotic body segments), "Laceys at Home" (five minutes of B&W home movie footage outdoors), "British Landing on the Moon" (a piece from a documentary on Lacey by Walter Patrick Krell with Union Jack-emblazoned astronauts enjoying TV in front of a telly-watching family), an extract from "Outside In" (a dark, Day-Glo art event involving lots of inflatable plastic and flashing lights), "R.O.S.A. B.O.S.O.M." (a shot-on-video robotic demonstration with Fairport Convention music), and "If I Had a Talking Picture of You" (a videotaped live stage performance from 2002 with Lacey doing a quirky routine in front of a slide projector, with a funny punchline). "Performance Inserts" is exactly what you'd expect, consisting of two pieces: "Heads, Bodies and Legs" (an animated bit of nuttiness with the Lacey and the Alberts musically cut into a compositional pinwheel) and "Stella Chase" (with the Laceys, in front of distorted lenses, doing a wild pagan ritual in the woods complete with cloaks and creepy outfits).

Things really take a major left turn with "Earth Rituals and Later Films," almost a plunge into Kuchar Brothers territory. "Awakening of the Earth Goddess, Rougham" is basically a Super 8 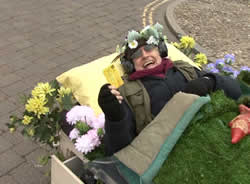 recording of a festival appearance by Lacey in which he does a body-painted pagan ritual for several minutes, while no humans at all appear in "Castlerigg" and "Wales Stone Circles," a pair of Super 8 landscape studies with a very ancient British feel as the camera explores the countryside under striking cloudscapes. Conversely, the VHS-shot, 8-minute "Breaking Away to Come Together" is almost nothing but human faces, albeit run through early '80s video processing techniques with lots of trippy transitions of male and female features blurring into each other over an ambient soundtrack. Finally, "The Re-Awakening of My Ancestral Spirits" is a lengthy (22 minutes!) nature ritual with more naked body-painted activity, which won't make a tremendous amount of sense (thanks to the low resolution again of VHS at the time) but, according to the liner notes, is a Viking-themed symbolic representation of the past generations in his family and an attempt to generate his own mythology from a naturist perspective.

That's it for the Lacey shorts, but there's still one huge title left: The Bruce Lacey Experience, a wild and pretty hilarious exclusive documentary made in 2012. Using a mixture of film clips, home movies, and plenty of new footage of the still-active Lacey performing some pretty crazy stunts in his town, where his status as a lovably eccentric artist seems cemented for generations to come. "Hand built in Great Britain" by director Nick Abrahams and artist Jeremy Deller, this would actually make for good viewing before plunging into the rest of the disc as it also sketches out the essential info about Lacey's career including some nifty vintage playbills and posters. The illustrated booklet would also be wise to check out, too, as it features some poster art for showings of his films, a written intro by Lacey himself, a lengthy William Fowler essay about his various creative outlets, and notes on each of the films by Fowler, Abrahams, animator Keith Learner, film historian Stephen Morgan, writers Adam Pugh and Lucy Reynolds, film curators William Rose and Jasia Reichardt, and the BFI's Sam Dunn, Peter Todd, John Oliver, Stuart Heaney, Vic Pratt, Sonia Mullett, Jez Stewart. If this release doesn't make your head spin, nothing will!