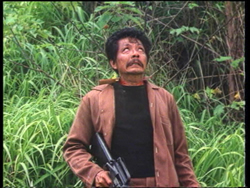 Action films have come up with some pretty bizarre conceits over the years, but few can compete with the “holy crap, am I actually watching this?” factor of the 1976 Thai offering, The Killer Elephants that beat  the likes of Ong Bak in the Thai action sweepstakes by several decades. And no, that isn’t a metaphorical title involving some overweight street gang; this one really is abo 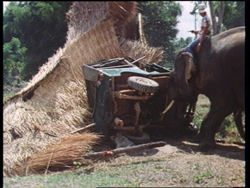 ut guys riding a pack of rampaging, super-destructive pachyderms against a squad of bad guys in the jungle. If that experience sounds even the least bit entertaining, you won’t believe how much more insane the actual experience of watching it turns out to be.

There’s not much plot here to get in the way of the almost nonstop barrage of fight scenes, chase scenes, and elephant crushing scenes, but the gist of it involves a larcenous mercenary (Tears of the Black Tiger’s Metanee) who must turn to his best friend, now a cop (who had to chase him down in the opening scene), when his pregnant wife is abducted by a vicious jungle crime lord/aspiring general. After several hand-to-hand showdowns and other random drive-in mayhem, they make a final stand by driving a bunch of elephants into the bad guys’ compound, smashing lots of jeeps and huts in the process. The thread of a plot is further obscured by the ludicrous English dub, which ranks up there with For Your Height 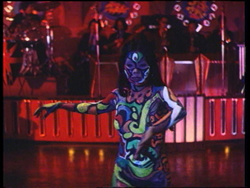 Only for sheer verbal surrealism. As if that weren’t enough, you also get the film’s undisputed highlight in which one unlucky actor gets a concussion from a particularly well-endowed elephant actor.

Some really dire bootleg versions of this film have popped up over the years (including a VHS-sourced, super-compressed version paired up with Along Comes the Tiger from EastWest), but this Swedish release from Attackafant (love that name!) is the first authorized one ever on DVD. (Bizarrely, the film remains unreleased on home video in its native country.)  This official version licensed from European distributors IFD & Arts Ltd. is a step up in quality just by default, though given the patchy release history of the film itself (supposedly there’s only one good film element in existence locked away in Thailand), you’ll have to have some context for this release to make sense. 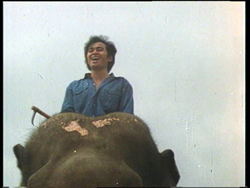 The default version of the feature here is a fullscreen presentation from IFD’s Digibeta version, which looks much better than previous releases but will obviously not be able to compete with today’s word of slick, lovingly remastered HD presentations straight off the negative. It looks comparable to what you’d see on a 1990s TV broadcast – some damage here, some non-destructive but occasionally obvious cropping from the 1.85:1 original, and perfectly adequate detail and color, all things considered. This version also features optional English or Swedish subtitles for the English dialogue track. An alternate version is the flat 1.85:1 letterboxed version sourced from a German VHS, which restores the wider framing but looks several generations dupier by comparison. This version is also conspicuously shorter by about eight minutes, so you may want to go with the fullscreen version first for the best experience. (Inexplicably, a few shots in this version are also slugged in from the fullscreen master, mainly some wide establishing shots that may have been damaged on the German tape. Just guessing here.) Also included is a very rowdy international trailer (under the title Rumbling the Elephant) and a lengthy text intro by Regis Madec, who rattles off plenty of trivia about the cast, crew, and release history of this crackpot action phenomenon.

Snap it up while you can from Diabolik and prepare to amaze all of your friends.