A film that could have been made in the 1970s but still at ease within the popular trend of ultraviolent Japanese genre-benders, Kichiku Dai Enkai (dubbed Kichiku: Banquet of the Beasts for its American DVD debut) feels like one of those counterculture revolutionary 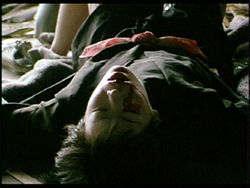 films like The Strawberry Statement or Claude Chabrol's Nada gone horribly, horribly wrong. (Or, if you will, the Korean revolutionary/revenge melodrama Sympathy for Mr. Vengeance on a much more ridiculous scale.)

While the bald, goateed leader of a gang of young revolutionaries languishes in prison, his followers spend their time holed up in the woods. The angry, sexually voracious, and mostly unkempt youths pass the time by beating each other up, arguing about how the police caught their ringleader, and engaging in bouts of wild, room-shaking sex. The sole woman in the group and newly christened leader, Misumi, uses her persuasive influence to manipulate the men to her own ends via a series of robberies; unfortunately this also entails jealousy and incipient madness which explode, first during a gory interrogation in the woods and finally in a mad, orgiastic display of sadism and violence inside their compound. 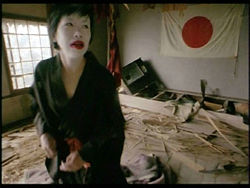 Mostly shot with bleary, naturalistic light and punctuated with jarring stock footage and graphic displays of carnage, Kichiku gets points as a daring experiment even when it doesn't entirely succeed. The inability to really connect with any of the characters results in a disassociated experience barely avoided by its most obvious aesthetic model, Reservoir Dogs, which used a similar closing spiral among unsympathetic characters as a trigger mechanism for massive bloodshed. Here the payoff in the final half hour feels like the film's entire reason for being; the nasty forest episode - complete with brains and viscera littering characters both living and dead - comes at the one hour mark and signals the nasty denouement lying ahead. While the political overtones feel like a reasonable justification for the subsequent excesses, some viewers may not feel the ends justify the means; in any case, it's certainly a distinctive experience and not easily scrubbed from one's consciousness. 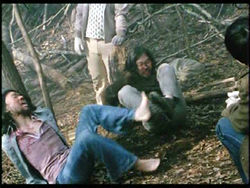 was a student project carried out to feature length over a one-year shooting period, Kichiku fares well on Artsmagic's almost absurdly loaded double-disc set. A single-disc edition from Shock DVD in Germany offered a half-hour documentary, but the Artsmagic disc ups the ante with a host of goodies on top of the solid transfer and 5.1 sound mix (as solid as one could expect from a dirt cheap 16mm film at least). The film itself occupies the first disc, while the second disc contains a video intro from Japanese cinema writer Tom Mes, the aforementioned making-of documentary (complete with on-set crack-ups during the more blood-soaked moments), an interview with director Kumakiri ("I basically get a great buzz from riots and turmoil") who talks about the difficulty of recruiting people for his unorthodox school project and a number of mistakes made along the way, an interview with cinematographer Kiyoaki Hashimoto, and a simultaneous discussion with four of the actors, Tomohiko Zaizen, Shunsuke Sawada, Shigeku Bokuda and Kentaro Ogiso. Also included is a "Reaction to Kichiku featurette from the Taorimina Film Festival in 1998 (ranging from profound respect to irritation), cast/crew bios, and the original, artsy Japanese trailer.