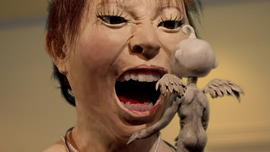 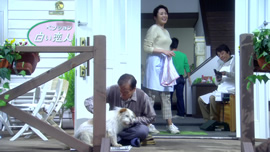 At the time of its release, an upbeat musical from prolific Japanese shockmaster Takashi Miike (Audition) seemed wholly absurd, at least until you figure in all the dancing corpses, experimental claymation and escalating body count. A pitch black comedy ideally suited for midnight movie viewings, The Happiness of the Katakuris (Katakuri-ke no kôfuku) is a loving and utterly insane salute to Japanese pop kitsch, zombie horror romps, and avant-garde animation, not to mention a loose remake of the 1998 Korean film The Quiet Family. If that sounds like a bizarre stew, well, wait until you see the actual movie.

Determined the help his financially struggling family, Masao Katakuri (Sawada) decides to start an inn located in a mountainous region of Japan. The whole clan is enlisted to run the establishment: wife Terue (former pop queen and renowned actress Matsuzaka), rebellious son Masayuki (Takeda), lovelorn daughter Shizue (Nishida), and doddering grandfather Jinpei (You Only Live Twice's Tanba). Unfortunately the first customer winds up committing suicide in his room on the first night, and to avoid any possible damage to business, the body is disposed of in a nearby shallow grave. Then along comes a huge sumo wrestler and his underage paramour, both of whom meet a particularly grotesque end. Meanwhile Shizue wanders into town and is swept off her feet, literally, by a "half-English" naval officer, Richard (punk singer Imawano), who speaks in broken Japanese and bears a suspiciously shaggy haircut. And then there's the nearby volcano that keeps threatening to erupt... 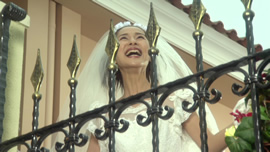 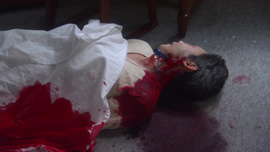 No matter what you're looking for in a movie, you're very likely to find it here somewhere between the Brothers Quay-inspired opening involving soup and a torn uvula, a "Thriller"-inspired dance sequence involving funky undead strutters, a riotous Karaoke interlude, and best of all, Richard and Shizue's "I love you" musical centerpiece which transforms into a Moulin Rouge-style riot of color and production design. Fortunately there's enough of a plot to back up the schizoid shifts in tone, with some wonderfully clever dialogue included to keep the brain occupied even while the eyes are overloaded. Richard gets most of the funniest bits, including a soliloquy involving his royal heritage and his relationship to the late Lady Di that should go down in the camp cinema history books. Not to be missed.

The Happiness of the Katakuris was first released on Hong Kong DVD in a skimpy edition containing only the theatrical trailer. Apart from a dynamic 5.1 mix, the disc is largely missable thanks to the mediocre non-anamoprhic transfer and unwieldy English subtitles punctuated with a large number of errors. The 2001 US disc from Chimera, produced with the American Cinematheque, is a more satisfying addition to their line of Miike releases. The 16:9 transfer is impressive for its vintage with crisp detail, and the optional English subtitles (very legible, spell checked, and in yellow) are quite satisfying, and the 5.1 audio is even punchier than the HK 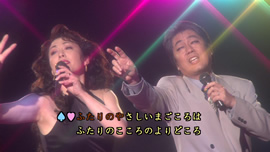 disc. The disc comes loaded with extras including the usual Chimera trailers and a 61-minute documentary, "White Lovers' Guest House," which focuses primarily on the rehearsals and execution of the various musical numbers along with peeks at the costuming process and the staging of the frenetic climax. Miike also appears for a 33-minute interview at a sound mixing board, discussing the 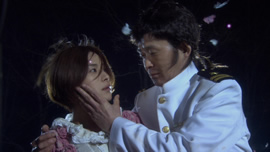 film's status as a Japanese "New Year" film (explained more in the liner notes by Patrick Macias) and his approach to pulling off such a technically audacious, non-commercial project. On top of that, Miike also contributes a feature-length audio commentary, in original Japanese on one track or with an English translator on a third audio track. Much of the information is expanded or rephrased from Miike's other appearances on the disc, but he also offers several new nuggets of information including some notes about how the film registers within his amazing, highly diverse body of work. The packaging indicates TV spots for the film, but none appear to be included. Various European editions followed on DVD, most containing only the trailer, while a US edition long after the collapse of Chimera and its distributor, Ventura, appeared briefly from Diskotek/Eastern Star promoting it as "The Sound of Music Meets Dawn of the Dead."

In 2015, Arrow Films announced this as the inaugural title in their transatlantic push for simultaneous releases in both the United States and United Kingdom. It didn't turn out to be the first out of the gate, but the extra time taken was worth it as their dual-format Blu-ray and DVD package is easily the most stacked edition of the film to date as well as the most technically impressive. The new HD transfer direct from Shochiku is a real beauty with a fine sense of 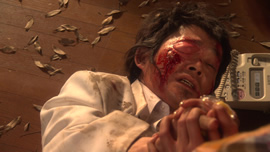 depth, beautiful deep blacks, and vivid, appropriately cartoony colors where it counts, showing off the bright and shiny cinematography to its best advantage. Zero complaints here at all and a more impressive viewing option than the repertory prints that first hit US shores back at the turn of the millennium. The Miike commentary and lengthy making-of are carried over here along with some great new bonus material. First up is an excellent new, very dense new commentary by Miike biographer Tom Mes, who expounds on pretty much everything you could want to know 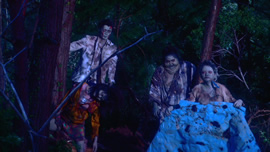 about the major actors and Miike's themes and filmmaking process, with nods along the way to connected titles like Tetsuo the Iron Man and The Man Who Stole the Sun. A slew of additional video interviews are included as well from around the time of the film's release including Kenji Sawada (5 mins.), Keiko Matsuzaka (3 mins.), Kiyoshiro Imawano and Shinji Takeda together (4 1/2 mins.), Naomi Nishida (2 mins.), and Tetusro Tanba (4 mins.), plus a new HD one with Miike called "Violent 'Til Die" (39 mins.) in which he offers a different perspective on the film as a turning point in his career and how it affected where he would go in subsequent years with more genre-bending experiments. There's also a vintage 5-minute Miike interview from the film's press junket talking about how he wanted to make it different from the Korean original, the trailer and TV spot, a 5-minute featurette showing how the stop-motion animation was accomplished, and a great new 23-minute HD visual essay by Mes about Miike's career entitled "Dogs, Pimps and Agitators" (covering everything from his shot-on-video origins through his most famous exports like Ichii the Killer and Dead or Alive. Also included is a thick booklet packed with photos and essays by Johnny Mains, Stuart Galbraith IV, and Grady Hendrix, plus a 2002 text interview with Miike by Sean Axmaker. Not easily forgotten, this is "family viewing" of the oddest, most delirious kind.