With the sexual liberation of film courtesy of naughty European imports, 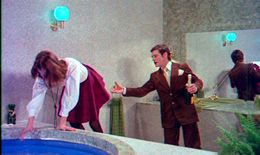 the writings of the Marquis De Sade suddenly became a hot property with filmmakers eager to lend a little literary cachet to their stories of carnal yearning. One of his earliest and most scandalous tales, "Justine, or the Misfortunes of Virtue," was quickly tackled by everyone ranging from Roger Vadim (the surprisingly timid Vice and Virtue) to Jess Franco (the surprisingly ridiculous Justine). Easily one of the loosest versions came in 1975 from frequent cinematographer (Re-Animator, etc.) and occasional director Mac Ahlberg, who updated the story (kind of) to the '70s and spiced it up with a few hardcore bits.

The basic idea is the same: two sisters, virtuous Justine (Joe Sarno softcore star Forså) and rowdy Juliette (Warburg), find themselves on the road looking for a home and part ways over their very different attitudes to life and sex. While Juliette indulges in wanton behavior involving lots of rich men and surreal sex clubs, Justine soon finds that the high road doesn't offer much in the way of dividends -- which becomes even more apparent when the two finally reunite, with Juliette having earned a tidy living as a 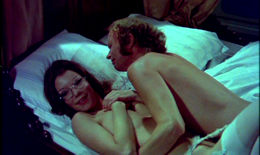 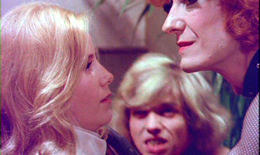 A fascinating if somewhat erratic sample of Swedish sex cinema from the golden era of porn, Justine and Juliette is fairly typical of many of its ilk as the (fairly brief) hardcore bits are mostly confined to background players (with an amiably unhinged Reems hogging up the big finale), while the more softcore-friendly stars mainly get naked and gyrate around a lot. What's actually more interesting is Ahlberg's impeccable visual eye, as he stages sequences far more stylish and interesting than they have any right to be. The early sex club scene is a colorful marvel reminiscent of a Mario Bava film, while the eye-catching decor and surprising camerawork keep even the most mundance scenes interesting. Forså is mostly confined to standing around looking doe-eyed and nearly being assaulted for most of the running time, but she finally dives in during the last third, which should make her fans happy.

The uncensored DVD release features a satisfying anamorphic presentation that exposes some shortcuts in the original source material, namely splicing together some shots that were obviously shot on varying film stock. Colors look beautiful and are almost blinding in a few scenes, while print damage is at a minimum. The original Swedish audio is presented in mono with optional English subtitles.