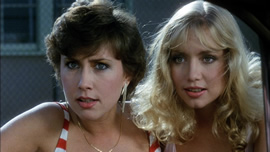 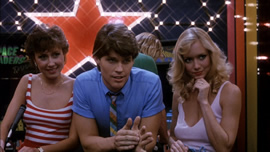 It was inevitable that someone would get the idea to combine the 1982 smash hit Porky's with the growing worldwide craze for video games, and sure enough, that same year production started on the immortal Joysticks. The mixture of Pac-Man and T&A proved to be an expected hit at the box office for indie distributor Jensen Farley Pictures (who also released The Boogens, The House on Sorority Row, and Chained Heat), but that wasn't enough to prevent them from going under. However, the film really found its cult following thanks to airings on USA Up All Night and a beloved VHS release from Vestron, ensuring that its glorious '80s pop culture excesses could still be passed down to future generations.

In an all-American town, the kids are all going nuts over playing video games at the arcade, which has become the hottest spot in town. Nerdy Eugene (Grease 2's Green) gets roped by two busty women into driving over to the arcade where they pretend to seduce him and wind up literally separating him from his pants (for reasons too inane to get into). Eugene winds up hanging around and spending time with all the hot women at the arcade (no, really) along with the owner's grandson, Jefferson (Star Trek III's McGinnis), who apparently can land any girl in the sack. One of the arcade groupies is dizzy Patsy (Bohrer), whose uptight dad Joseph (Baker) shows up at an inopportune moment while everyone's watching Jefferson and his two topless conquests undergoing a sexy prank (for reasons also too inane to get 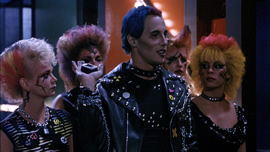 into). Convinced the place is really a brothel in disguise, Joseph goes on a rampage to get the place shut down and enlists some comical punks (led by Jonathan Gries from Fright Night 2 and Uncle Rico from Napoleon Dynamite!) to help him out. Of course, it all leads to a big video game showdown to determine the arcade's ultimate fate. 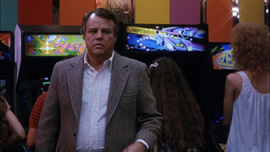 As you probably already figured out, Joysticks is sophomoric, dated, and wholly entertaining if you're in the right frame of mind. This was actually the second film Baker made with director Greydon Clark after the horror parody Wacko, and the drive-in legend best remembered for Walking Tall really gives it his all here. The T&A quotient is pretty high here including the obligatory scene of a jiggling topless actress playing a video game, and in a stroke of mad genius, many scenes feature a giant Pac-Man whizzing across the screen as a transition device. Oh, and of course there's a killer '80s soundtrack complete with a rock theme song you absolutely won't believe ("Totally awesome video gaaaaaaaames...").

The video history of Joysticks is essentially identical to that of The House on Sorority Row: VHS release from Vestron, short-lived DVD release from Liberation in 2006, and then a far superior special edition from Scorpion. The anamorphic transfer of their 2012 DVD looks good considering the low budget ($250,000); some of it has that cheap, chalky look familiar from '80s exploitation titles, but it's a major improvement in every respect over past editions. The 1.78:1 framing looks better judged, too (and don't worry, some brief but surprising female frontal nudity during a fabricated flashback scene almost but doesn't get matted out). Weirdly though, it has a slight "Cinemascope mumps" look in many shots that indicates something was odd with the source material or the way it was filmed. 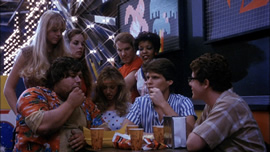 Clark appears for a commentary track in which he talks about the inspiration for the project (seeing kids going nuts for video games while he was trying to sell Wacko), his appraisal of this as one of his best and most 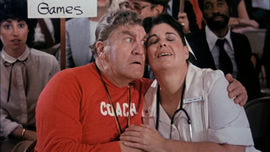 enjoyable films, and the tricks for working with inexperienced young actors, among many other topics. There's a hefty amount of dead space here, but when he talks the material is pretty worthwhile. Clark returns for an entertaining 17-minute interview in which he basically runs through his career highlights including his three Joe Don Baker collaborations (the third was Final Justice), joining up with Menahem Golan for the berserk Lambada cash-in The Forbidden Dance, working with Robert Englund on Danse Macabre, and, briefly, making the brilliantly weird mutant car horror film, Uninvited. You also get bonus trailers for Kill and Kill Again, Skateboard, Cheerleaders' Wild Weekend, and Where the Boys Are '84.

Three years later, Scorpion revisited the title as a 1,000-unit Blu-ray release via Screen Archives. The Clark commentary and featurette are carried over here, and the theatrical trailer is included as well. The really big news here is that it's a completely different transfer and a significant step up, with more natural flesh tones compared to the orange cast of the DVD and far better detail throughout. The framing is also different, with the stretching effect now gone entirely and additional image info clearly visible on the sides. For example, compare this shot from the DVD with the same one above from the Blu-ray, and the difference should be obvious. The DTS-HD MA mono audio sounds excellent as well apart from some scratchiness during the distributor logo. It's, like, totally awesome.