A film that should send devotees of feminist literature into ecstasy, Separation feels like a lost post-Victorian study of female psychological rupturing mainlined directly into film through the sensibility of a mad filmmaker like Ken Russell. If youre in the right frame of mind, this film  unloved and essentially unseen since its original release  is a tremendously thrilling release as it now represents something fresh and valuable, a pop-art-inspired gender study worlds away from cinema as we know it today.

First-time director Jack Bond teams up with leading actress Jane Arden (his real-life companion with whom he would collaborate on two more films before she took her own life in 1982) for the fragmented and sometimes bewildering story of a woman dealing with the fact that her marriage is essentially over, and the psychological demands of coping with her identity as a female out of her teenage years in mod London threaten to overpower any means of adaptating she can find, which include taking a young lover who may be unable to keep her grounded. 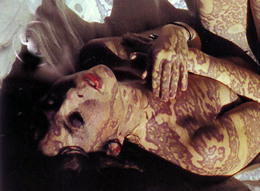 This sort of loose, abstract storytelling can test some viewers to the limit (some viewers will most likely be tempted to shut it off hour an hour in), but the best way to approach it is either as a nonlinear look at a fracturing personality or an absorbing snapshot of late 60s London culture, complete with a great soundtrack fueled by Procol Harum music (including a few bits unreleased anywhere else) along with contributions by the still-underrated Stanley Myers, who went on to work regularly with Nicolas Roeg.

Though the BFI release of this film (the first on video anywhere in the world) is careful not to oversell the film, its supplements do their part in offering some context and a solid argument as to why its worthy of attention. The hi-def transfer itself is a real beauty, with the majority of the film in razor-sharp monochrome interspersed with a few bursts of color footage, some of which becomes quite psychedelic. (Contrary to the packaging which indicates a full frame presentation, it is indeed anamorphic widescreen.) No complaints whatsoever on the technical end. Optional English subtitles are also included, which can be handy when your eyes are busy being combarded with the avalanche of imagery throughout the many montage scenes. The biggest extra here is a rich and interesting commentary track with Bond and the BFIs Sam Dunn which covers the entire history of the film, from Arden and Bonds initial working relationship through their intentions and inspirations while mounting this very challenging and unorthodox film. Also included is the abstract short film Beyond Image (whose artistic visual effects by Mark Boyle and Joan Hills were used in the color portions of the main feature) and trailers for this film as well as Anti-Clock. A color illustrated 36-page booklet also makes a good case for the film in the 60s English cinema canon thanks to essays by Claire Monk, Maria Walsh and Michael Brook along with vintage press coverage. While its obvious this films reputation can only increase with this release given its complete neglect for decades, a hearty pat on the back must go to the BFI for bringing attention to such a divisive but ultimately rewarding undertaking.

Apparently deciding that their first filmic collaboration, 1967s fragmented Separation, was simply too accessible and cozy, Jane Arden and Jack Bond hurled themselves headfirst into one of the most caustic, abrasive, and daunting British films ever made, which was understandably buried upon its release but returns in the digital era to astonish audiences completely unprepared for its full-on insanity.

After being dragged out of a lake, a nameless young woman (Fraey) finds herself committed to a countryside group therapy session where the main therapist (Arden)  who doesnt seem so stable herself  guides the female patients through a 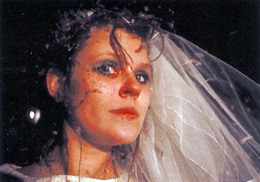 grueling series of encounters which slip in and out of reality. Hallucinatory and almost completely lacking in any sort of linear storyline, this film was created with the participation of Ardens Holocaust Theater Company, an avant garde group of players who cut loose here in sequences of mounting hysteria (the most memorable consisting of a half-naked screaming woman crucified and mounted in the air, an image worthy of The Devils). The end result plays something like a terrifying, distaff version of a film by Fernando Arrabal or Alejandro Jodorowsky (yes, its that far out), and the apparent use of illict substances on the set contributes to the air of improvised chaos. Think of the insane asylum doc Titticut Follies under the influence of mescaline, the only way to begin to describe this harrowing experience. 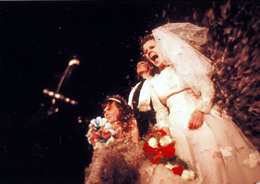 Working from the original 16mm negative, the BFI has done another wondrous job resuscitating a film consigned to oblivion many years ago. The visual scheme is much darker and messier than the previous Separation, but the HD transfer looks terrific all the same without any excessive digital noise reduction on display. The DVD and Blu-Ray contain the same material, though its presentd a bit differently; on the former, a quartet of long deleted sequences from the workprint are included as a supplement, while the Blu-Ray integrates them back as an alternate complete workprint version of the main feature if you so desire. (As a result, this alternate cut runs well over two hours, which might be too much for most peoples sensibilities.)

Actresses Sheila Allen and Natasha Morgan contribute separate video interviews about the project, and they offer incredibly candid and sometimes very negative appraisals of the experience which apparently claimed the lives of some participants during and after filming. A typically thorough illustrated 38-page booklet features liner notes by Sophie Mayet, Susan Croft and Amy Simmons, with additional vintage Arden pieces written for the theatre group and the play Vagina Rex and the Gas Oven, bios of the main cast and crew, and a radio transcript from a 1972 David Will piece about the film. Certainly recommended for those who can handle it, but be warned, this film has very sharp teeth.

At first glance, the entire concept of preserving Anti-Clock in a high-definition transfer seems like a perverse joke as the opening half hour consists of bluish, often abstract video footage akin to watching the 80s version of a kinescope. You can almost hear home theater owners screaming in horror and reaching for their eject buttons. Have no fear, though; the film then switches over to beautiful (albeit still very blue) 35mm film for the bulk of the remaining running time, and the film itself is a tantalizing science fiction art film that anticipates the New Wave/punk sci-fi trend of the early 80s which produced such films as Liquid Sky and Repo Man. 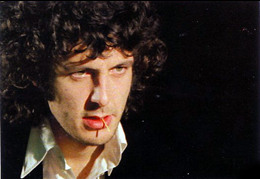 The subject matter here is certainly more commercial and normal than Arden and Bonds previous two films, but the execution is still wildly unconventional and challenging as it charts the psychological state of Joseph Sapha (played by Ardens son, Sebastian Saville, who now runs a prominent addiction outreach organization), a self-destructive young man cursed with the ability to receive constant visions of the future with no understanding of his present state. Unable to deal with his memories, he can only relate to a professor (also Saville) attempting to reprogram and unravel these complex thought processes.

Like the prior Arden/Bond films, Anti-Clock disappeared from view almost immediately after releae, this time primarily because of Ardens suicide which spurred Bond to remove it from public exhibition. Extremely strange and often hypnotically beautiful, this might be the best place to start for newcomers and rewards patience with many provocative ideas about the nature of the human mind, political freedom, and aesthetic perception, which is mirrored in the alternating video and film presentation which veers between jagged, distorted TV screens to lucid, neon-drenched film tableaux. Theres certainly never been anything else like it. The BFI release contains the aforementioned HD restoration of the film itself (which looks exactly as it should, for better and for worse). Extras this time out include a 37-minute experimental, very abstract Super-8 Arden/Bond short called Vibration, the theatrical trailer, a bonus DVD containing Jack Bonds shorter, more streamlined 2005 recut of the film (paring it down to under 90 minutes), and the usual illustrated booklet, this time with liner notes by actress Penny Slinger, Bond, and Chris Darke, as well as vintage remarks from Jack Kroll and Michael Brook.