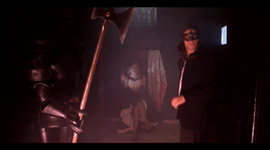 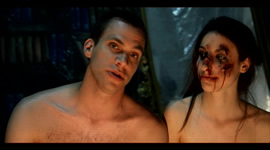 Best known for his peculiar 2009 explicit erotic horror film House of Flesh Mannequins, Italian director Domiziano Cristopharo is up to his old tricks with this self-proclaimed homage to the late Joe D'Amato. That means lots of gore and graphic sex, though it's shot with a dreamy artiness far removed from the vintage D'Amato years. As you've probably guessed from the title, it's a riff of sorts on the Dr. Jekyll/Mr. Hyde tale except the physician experimenting where he shouldn't is Henry Chagall (Zanelli), a man struggling to overcome his impotence by injecting his new formula... well, you can figure it out.

Unfortunately the good doctor's experiments have a side effect: he transforms into Eva Hyde (Gemma), whose libido runs rampant and has an intoxicating effect on everyone in her vicinity. Among them are Chagall's helpers, his assistant Hans (la Gorga) and body snatcher Abdul (Autullo), all of whom are sucked into a vortex of sexual extremes including body piercing, gender swapping, a confessional, and dirty puppet shows. 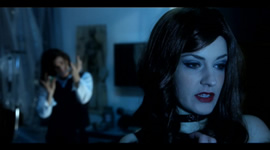 pretty decent for the most part, and somehow veteran actor Venantino Venantini got pulled into this to give it a little extra cult cred as well. 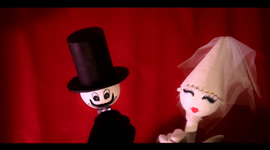 The One 7 Movies DVD release looks about as good as an SD rendering could handle the heavily saturated hues on display here, often surrounded by dense layers of black that are handled relatively well here with minimal compression issues. The Italian stereo audio sounds solid with optional English subtitles, and the unusually hefty extras for the label include the Italian trailer, 17 minutes of (mostly sedate) deleted scenes, a six-minute "Confessions" featurette with Cristopharo and Gemma talking about the film's message involving safe sex and fluid sexuality, an image gallery, and a blooper reel, plus a DVD-Rom comic book option.