Between its derivative title (swiped from the classic Spanish horror film of the same name) to its storyline cobbled from the likes of The Changeling to Spirits of the Dead, this low-budget horror from the determined Polonia Brothers has a lot of obstacles to overcome but at least represents something of a step up from their previous outings, the well nigh unwatchable Bad Magic and Feeders. 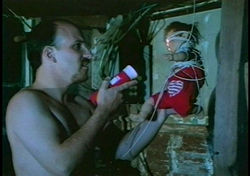 In between spastic montages, we follow our protagonist, depressed horror writer Marty (Bob Dennis), whose wife accidentally killed herself and their child while falling asleep smoking. Seeking inspiration, Marty decides to shack up at a remote, supposedly haunted house. He meets a full-bodied female neighbor who's prone to saying things like, "I love this house. If it were alive, man or woman, I'd make love to it!" Naturally they jump in the sack, during which Marty experiences a horrific vision. Before long strange things like power outages, writhing naked strippers, hallucinations involving severed heads, and axe-wielding little girls have turned his cure for writer's block into an unending nightmare whose solution might come at a severely high cost. 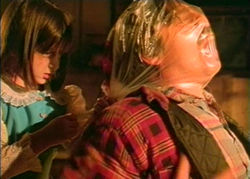 Shot in the middle of the Pennsylvania woods, The House that Screamed musters up some decent atmosphere during its night scenes but stumbles along quite a bit on the way. The filmmakers obviously love horror films and try to eke a few scares out of their scenario, but the lethargic pacing and erratic production values undermine what could have been an effective model in style. At least the film has the sense to poke fun at itself, with some amusing horror fiction in-jokes and a funny poke at Feeders for good measure. Though saddled with some unwieldly dialogue, Dennis manages to carry the film and proves to be vulnerable and sympathetic enough during the long, non-verbal passages in which he explores the ghostly terrain.

Wildly erratic, the transfer for The House that Screamed depends entirely on the lighting used from scene to scene. The opening sequence, a wildly gratuitous shower scene followed by a hamfisted crawl explaining the role of ghosts in the year 2000, does not bode well thanks to an abundance of noise and grain. Luckily the video quality smooths out somewhat afterwards, though the film never looks really polished or slick. It's at least watchable, and the stereo sound is well rendered despite some occasionally muffled dialogue. The DVD extras run almost as long as the feature itself, while the Polonias turn up for a commentary track as well. The discussion is fairly dry, explaining why certain elements were filmed and included (with lip service given to the obligatory nude scenes). Trailers include one for this film, two alternate spots for the sequel (Hellgate), and one for the Polonias' Dweller. Then we get to the real meat of the disc: an 18-minute "making of" documentary consisting mainly of talking heads (Dennis and the Polinias) discussing the film, a 14-minute reel of raw footage from the last day of shooting, and more questionably, a 15-minute tour of the house that could have probably been wrapped up in about a third of the time. The first two featurettes are quite interesting, however, and Dennis in particular turns out to have some interesting observations about the filming and his character. Last up is a still gallery and a blooper reel (mostly clowing around and outtakes) accompanied by music snippets.