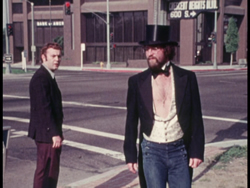 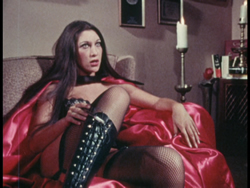 company, and in the case of this pairing from Impulse, you get a vivid demonstration of the difference between West and East Coast smut in the first half of the 1970s.

First up we have Honey Buns, a silly comedy with a couple of big stars (neither of whom handle the most graphic scenes) and a really silly premise suitable for a Benny Hill skit. Schlubby Harry (Hewitt) works at Internally Yours, a firm dedicated to developing cutting edge feminine hygiene products; unfortunately, his overbearing boss (Barnum) is also a douche. On top of that he gets chewed out by a new applicant (Uschi Digartd in what amounts to a cameo), but he finds comfort in the form of his exhibitionist coworker (Bond). Outside on the Miracle Mile he crosses paths with a weird magician (Whippsnake) who takes him on a walking tour (complete with awesome '70s L.A. footage) and offers him a magical red pill that can summon up the girl of his dreams. Unfortunately the vixens disappear at the worst possible moment, leaving him frustrated as he tries to keep happiness in his bed. Will he be able to come up with a plan that keeps everyone happy?

This one first appeared on VHS from Blue Video (virtually unwatchable) and then sank without a trace before surfacing again here on DVD. It's a bit of a weird one as it straddles the line between softcore and hard, with insert footage for most (but not all) of the actors. Hewitt was a strictly softcore actor in fare like Hollywood Babylon, and even the normally uninhibited Bond keeps it more under control this time. On the other hand, the last 20 minutes are virtually wall-to-wall flesh, though you're never quite sure who it belongs to much of the time. That said, it's fun seeing a parade of some of the best starlets of the period like Sandy Carey turn up as Harry's wish fulfillments, and at 74 minutes the film never overstays its welcome.

Impulse's DVD is on the better end of the scale for a film of this level of obscurity (formerly known under the title Heads or Tails), taken from a 35mm 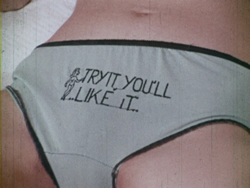 print is pretty decent shape. Colors aren't amazing by any means but it's all quite watchable and not a bad deal if that cast rundown sparks your interest. As usual, there are no extras. 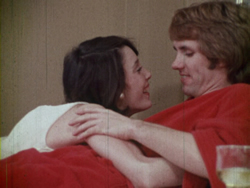 Far more straightforward is another Impulse offering from the same street date, the anonymously-directed The Chambermaids. You can pretty much figure out the premise just from the title, but here we go with another sexy romp featuring some of New York's finest from the '70s. "I'd do better on the unemployment line," gripes hotel maid Sally (Valerie Marron) to her coworker, Mary Ellen (Mary Stuart, sporting a really short 'do). How can these working girls earn some extra cash? By servicing the guests, of course. From there it's basically one carnal encounter after another as Marron seduces freshly awakening, Stuart shows off her skills with married Eric Edwards in front of his wife, and everything turns into a comical game of musical beds with Sally essentially vanishing stage right while everyone else gets jealous and teams up on each other in the sack.

Obviously shot in a hurry, The Chambermaids is nowhere close to the best of the era but fairly amusing if you keep your expectations in check. Levi Richards has fun as always as an undie salesman trying to score points with a major customer, leading to a "yuk yuk" ending you'll see coming a mile away. The Impulse disc is the film's first appearance on home video since its ancient VHS release from Eros Video in the '80s, and the transfer is a few notches up in terms of clarity if not print quality; even the packaging notes it's "re-mastered from a scratchy, barely surviving, theatrical print." That means plenty of debris and other distractions, too, but if you just want a silly slice of sexiness with a bunch of familiar players from the era's golden age, here ya go.