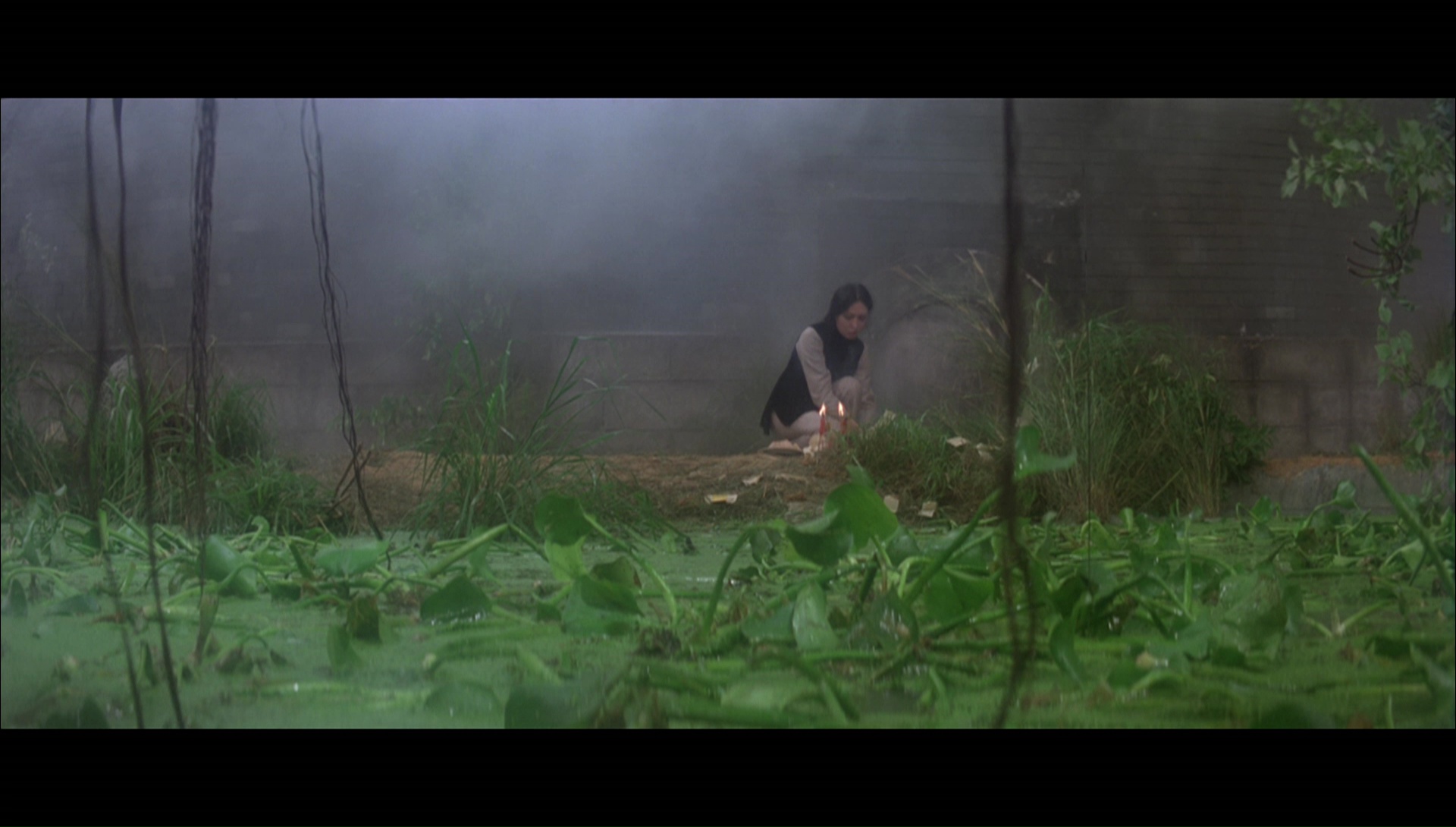 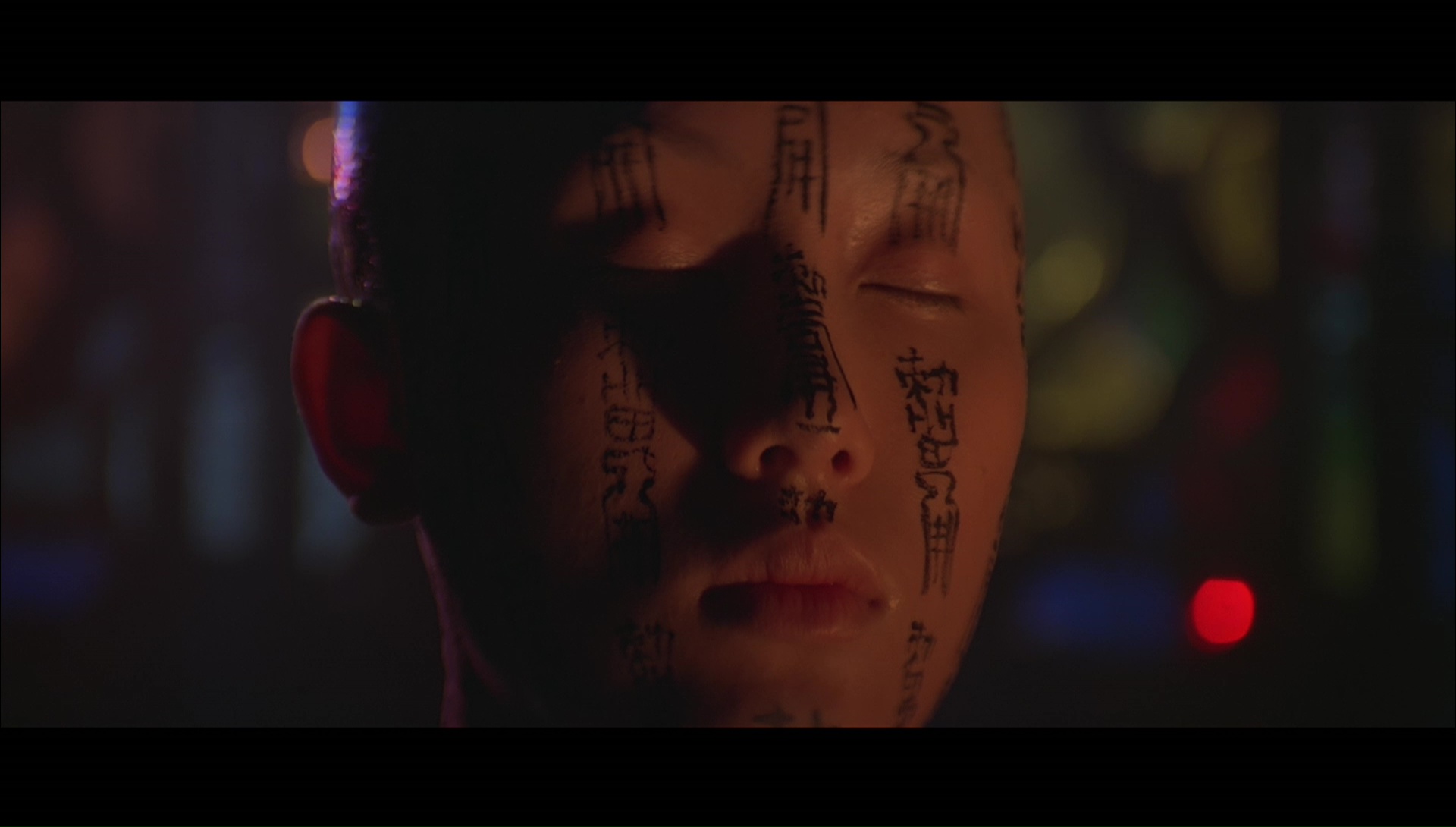 The prolific Hong Kong studio Shaw Brothers is best known for its astonishing string of martial arts classics, but anyone familiar with their horror films knows that they can get wild. Very, very wild. Titles like Killer Snakes, Seeding of a Ghost, Human Lanterns, and the Black Magic films specialize in mixing strong classic atmosphere with potent shock value, including scenes that can still set audiences back on their heels today. To that list you can add 1980’s Hex, which inspired director Kuei Chih-Hung (The Boxer’s Omen, Corpse Mania) to churn out a couple of unrelated (and much sillier) horror sequels in the early ‘80s, Hex vs. Witchcraft and Hex After Hex.

The first hour or so of this film is basically a moodier, Chinese take on the French classic Diabolique as an ailing abused wife, Chan (Tien), has had it with her drunken lout of a husband, Yeung (Jung). They live out in the middle of the countryside so it’s hard for her to go anywhere for help, but the tide turns with the arrival of Yi Wah (Szu-Chia), a family friend who offers to help around the house. Soon on a dark and stormy night the two women are drowning hubby in a giant water-filled pot, and anyone who’s seen the Clouzot film can easily guess where things are heading. However, the big twist lands halfway through, and it soon turns out there’s something else going on in this cursed house.

That brings us to the last half hour, the film’s real 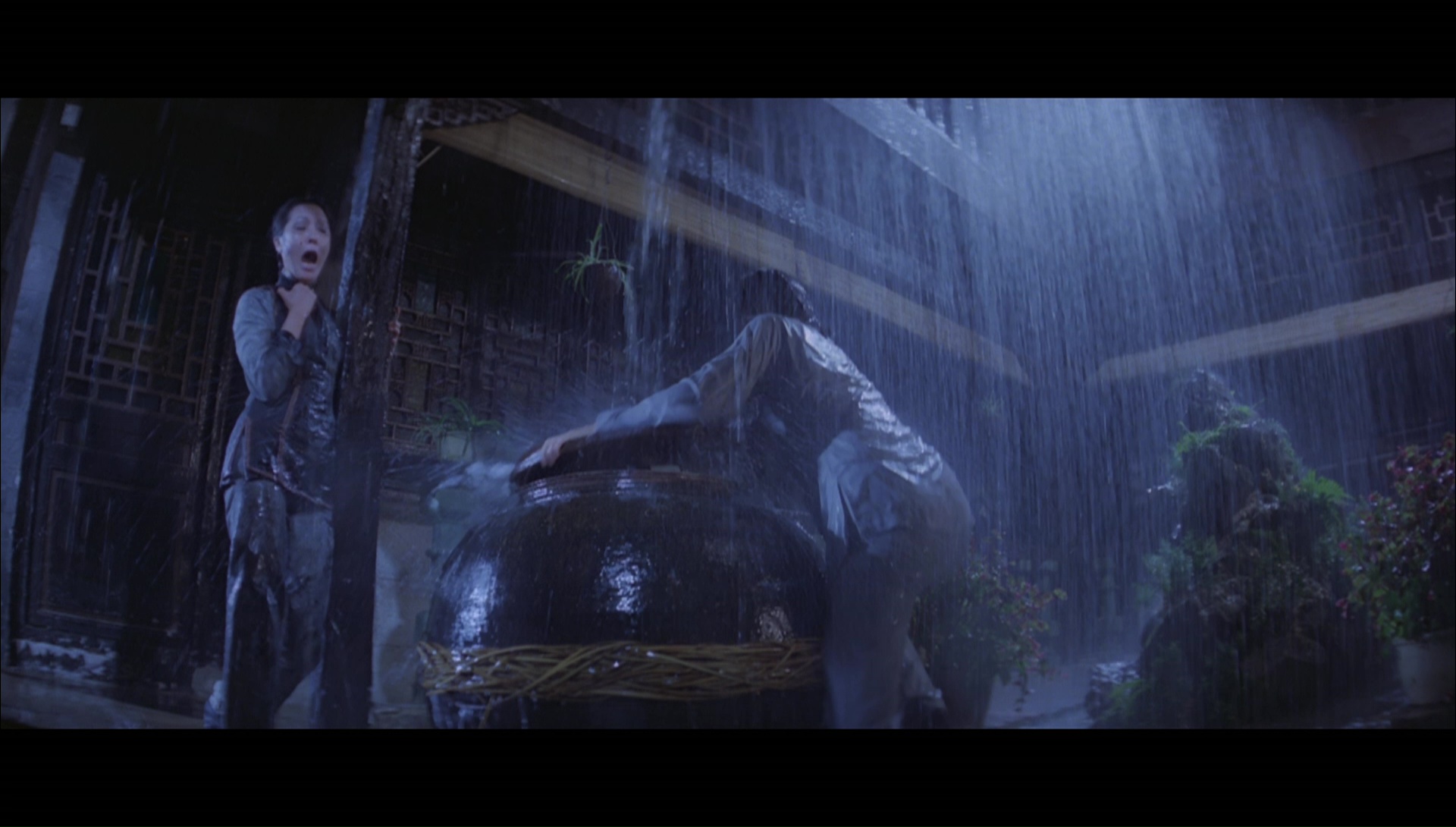 claim to fame, which explodes with a riot of colorful phantasmagorical imagery including an attack by ghost-white severed hands and a stained glass exorcism involving 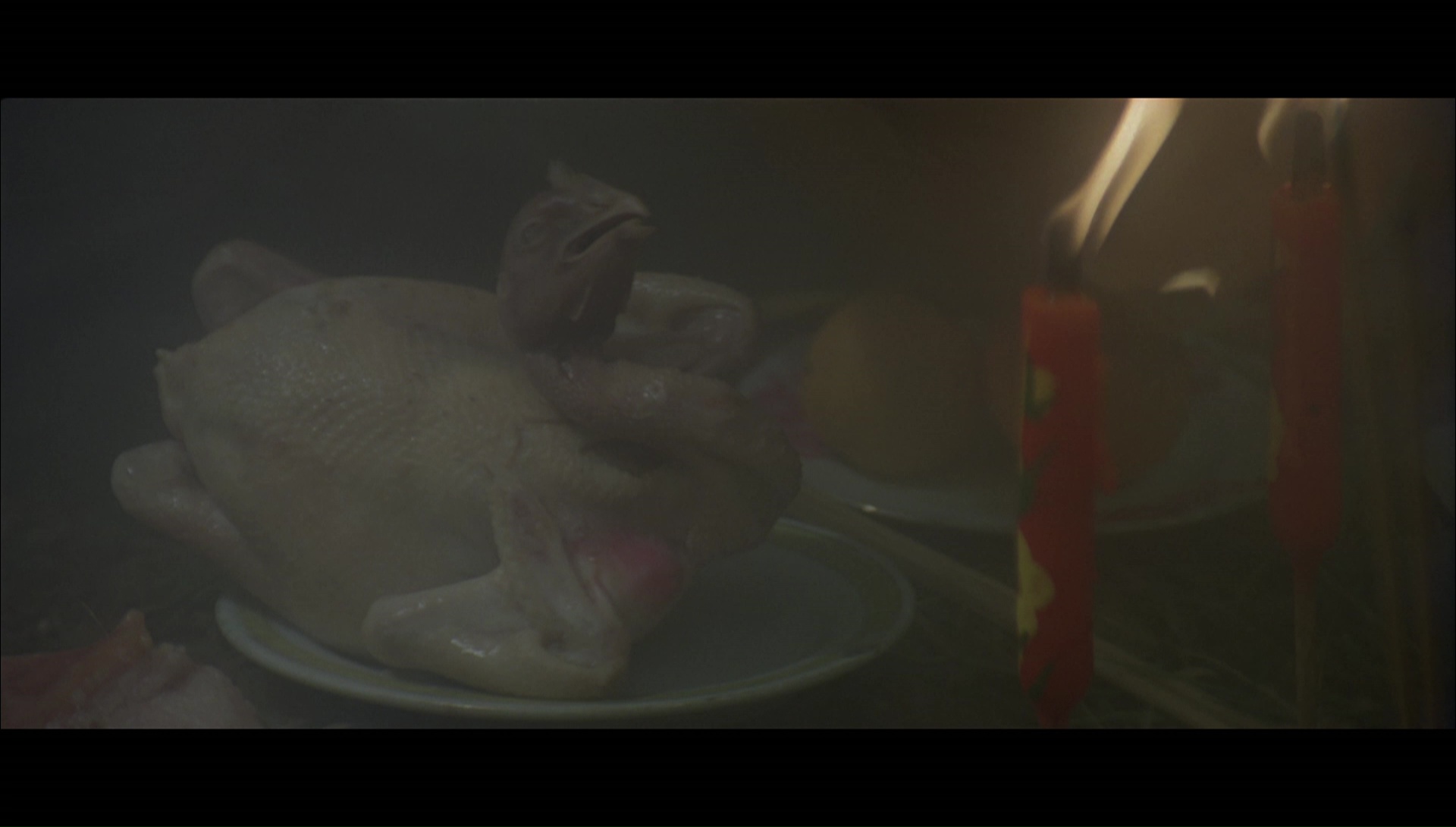 body paint scriptures and the most memorable possessed nude scene to ever come out of Asia (with a twist yanked straight out of Kwaidan).  Even if you think you know where this one’s heading at first, be sure to stick it out; the ride more than pays off in the end.

Never released on North American home video, Hex hit a number of Chinese-friendly import outlets via a DVD and VCD edition from Celestial at the height of its Shaw Brothers heyday with dozens of titles streaming out at a time. However, Celestial also made the odd move of mastering all of its films in PAL at the time (presumably for the somewhat higher resolution) and then converting them over to NTSC, which resulted in a number of issues that continued to plague even some of the legit American DVD releases down the road. That went for this film as well, which looked pretty good thanks to its vibrant color scheme and atmospheric visuals but still left plenty of room for improvement.

Thankfully the dual-format Blu-ray and DVD edition from 88 Films corrects all of those conversion issues with a fresh HD scan for the film’s UK home video debut. Most of the film uses a ton of diffusion to varying degrees so it’s not the sharpest presentation in the world, but it appears to be 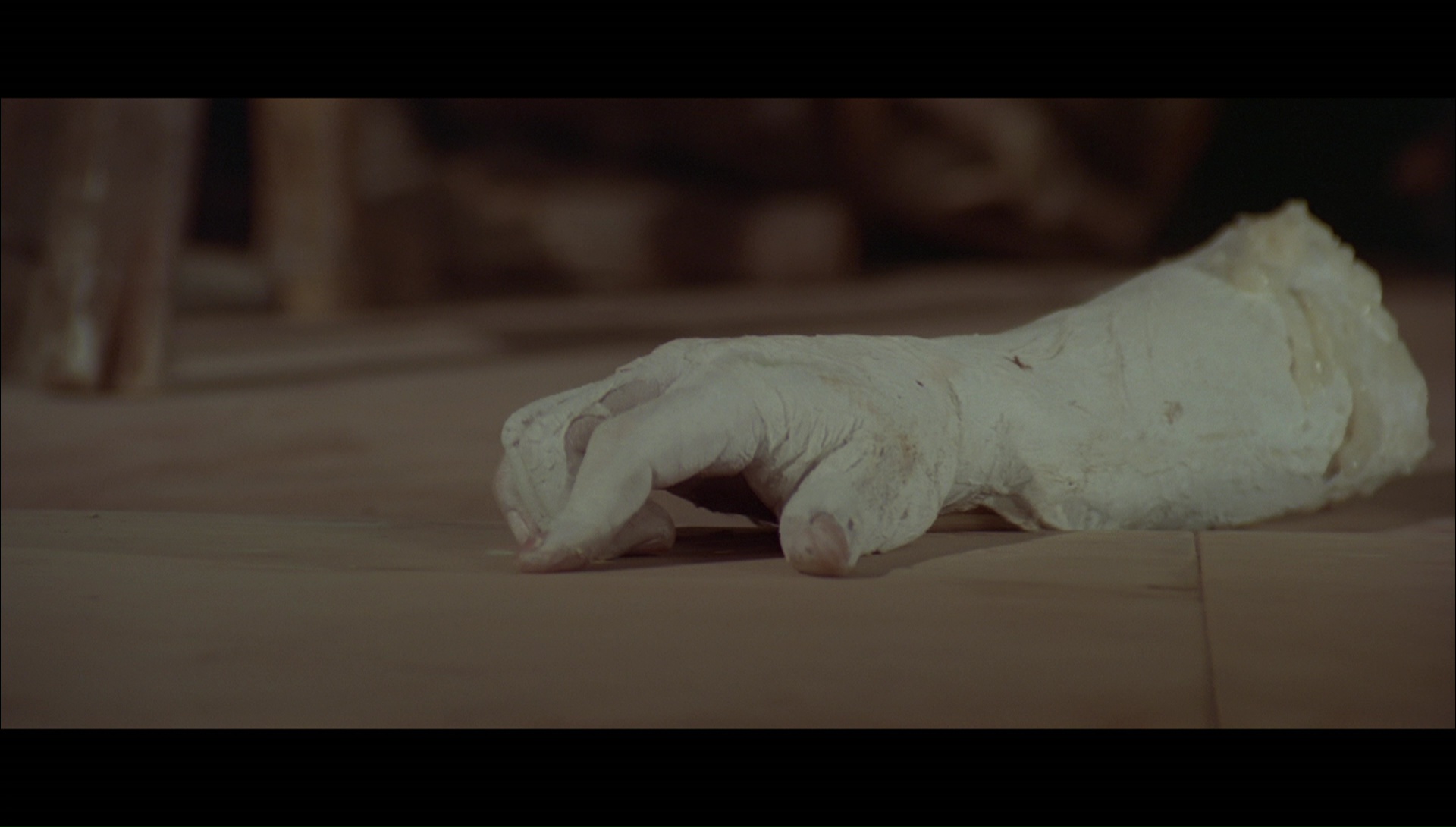 accurate to the intended look with lots of fog and filtered lighting pouring across the frame in the majority of shots. Colors look great with an array of eye-popping reds, blues, and greens 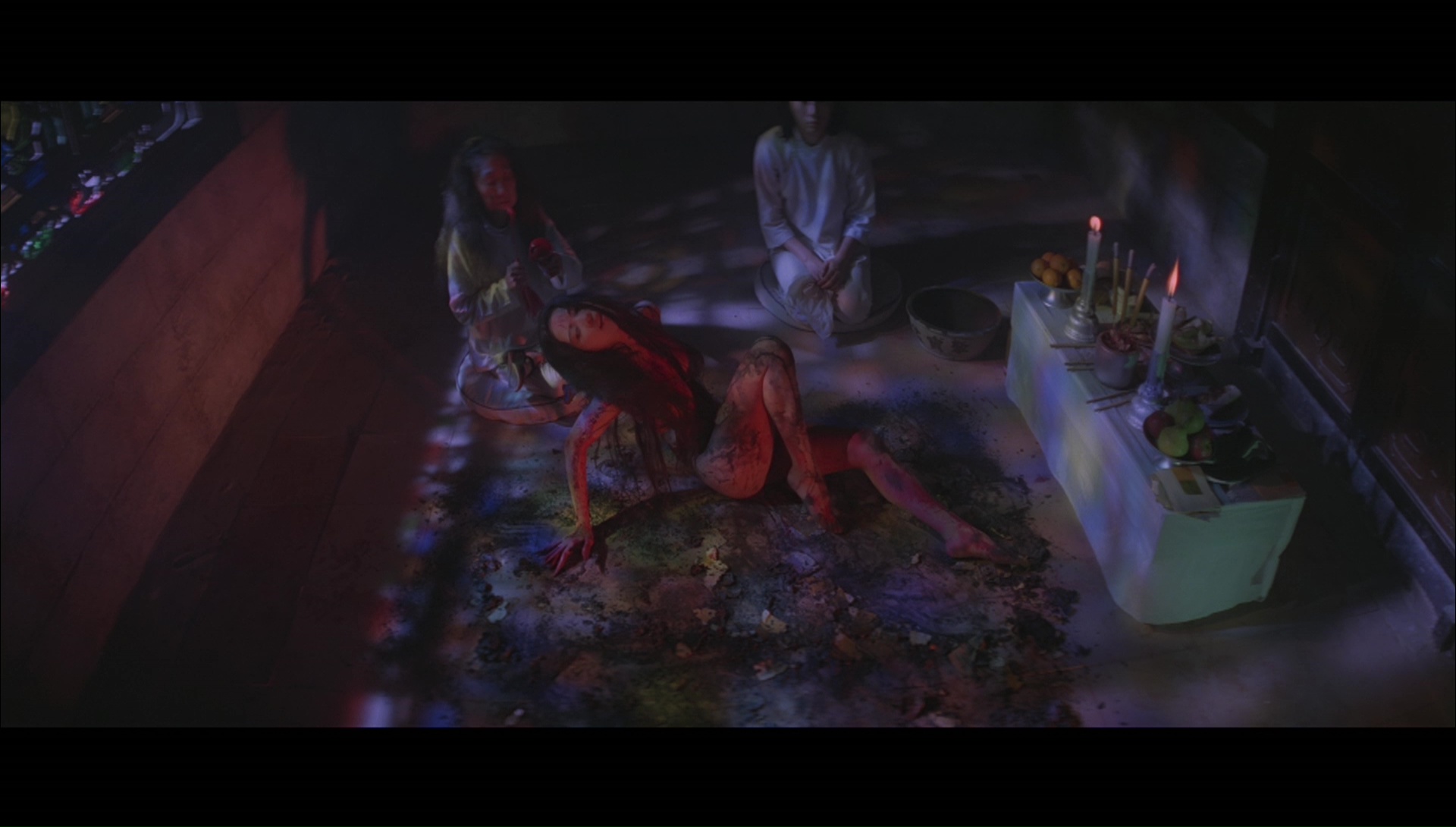 erupting during that final stretch. Also the film managed to slip by the BBFC unscathed; apparently animal cruelty regulations don’t apply to snakes getting cleavered in half for no good reason. (Even more surprisingly, the packaging notes that this is given an 18 rating solely for “Sexualised nudity,” which really makes you wonder what the board gets up to in their bedrooms.) The mono Cantonese dialogue with optional English subtitles sounds solid enough in the Blu-ray’s LPCM mix.

Extras include the “original” trailer (the same one Celestial created for the DVD release) and the 23-minute “The Studio that Conquered a Continent,” in which Hong Kong film expert Bey Logan (in front of a Black Shampoo poster!) chats about the studio’s history with a focus on the ‘60s and ‘70s landmark period as it transformed Chinese cultural stories into lavish productions that rivaled Hollywood’s output. He also touches on some of the more unorthodox swordplay films, the major actors from the era, the films that broke through in America, and plenty more. Logan also appears in the 6-minue “Hong Kong Movie Language” about the country’s evolving sense of identity under ownership by different nations including Great Britain and Japan, which in turn had an effect on the creation of both Cantonese and Mandarin language tracks for many films. The packaging also includes reversible sleeve options (the usual, slightly modified Celestial art on the front and the original poster on the back) and a liner notes booklet containing “Spellbound,” a Calum Waddell essay about the state of Hong Kong theatrical and video distribution then and now, the hunger for homegrown horror product, and the various horror influences that might be at play in this psychedelic spooky show.