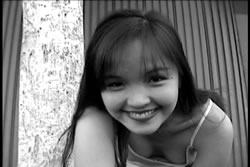 A solid contender for the most foul-mouthed film of 2011, this self-described homage to film noir classics dragged kicking, screaming, and spitting into the sunlight of 21st Century Los Angeles is the brainchild of Jay Jennings, director of the 1999 indie film Loanshark. Running an hour and shot in black and white DV, it's basically a quick tour through the rough and tumble life of Teddy Greene (Santore), our antisocial narrator and protagonist who spends his days cruising through downtown L.A. and Hollywood collecting debts for his boss, tax lawyer Tony (Young), and trying to find a few opportunities of his own on the side. Not exactly the most subtle character, he has a daily routine of walking up to people, asking them to pay up, and then smacking them around or smashing up electronic appliances when they can't cough up all the dough. Whether it's forcing a delinquent jogger to strip to his skivvies in a public park or harassing a junkie priest, he definitely has his hands full but tends to throw a hissyfit when things don't go his way. Then there's his shrewish ex-wife and floozy blonde girlfriend to worry about, plus the fact that his boss is getting fed up with 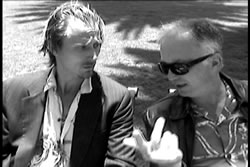 Teddy's indiscretions and might be plotting to have him killed. When Teddy makes a fateful decision to pull up to the wrong Asian hooker one afternoon, events are set in motion that will change the course of what's left of his life forever. 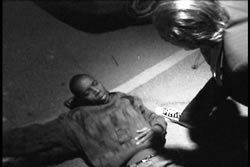 Fast-paced and hilariously foul, Hell to Pay features tons of great Los Angeles location shooting from the east side of Hollywood all the way to what appears to be Santa Monica, with a little of everything in between. There's not a lot of forward narrative momentum here as the first half almost entirely consists of Teddy acting like a complete jerk and abusing everyone he meets; it's often hard to tell whether it's a tribute to hard-boiled crime films and Scorsese street epics or a wicked send-up a la Wild Things. In either case, Santore does a fine job of carrying the entire film, letting loose with torrents of verbal abuse but becoming increasingly vulnerable as the story spins to its surprisingly not-as-violent-as-you'd-expect climax.

Hell to Pay doesn't have a commercial release to date, but it does have a site set up by Jennings to spread the word. The film was shot full frame but played with anamorphic enhancement and looked noticeably squished, so if you snag it, be sure to adjust your set accordingly. As far as standard def projects shot on video go, it looks about par for the course; the film is mostly dialogue driven with a minimal electronic score seeping through at times, so the two-channel stereo mix gets the job done just fine.