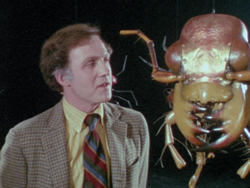 One of the many great but scientifically ridiculous documentaries churned out in the 1970s, The Hellstrom Chronicle is one of the wildest as it takes a look at how all those insects scurrying around on our planet are really insidious, psychic warriors planning on overpowering the human race. Imagine a National Geog 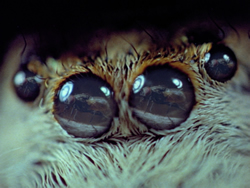 raphic nature film hijacked by a bunch of acid heads who just got out of a 2001: A Space Odyssey screening, and you might have some idea of what to expect here. Bear in mind that films like this were actually becoming fairly common, with Chariots of the Gods scoring big with worldwide audiences as it speculated about how humanity and religion were sired from alien astronauts. Well, apparently bugs were part of that equation, too, and they plan to show no mercy.

For cult film fans, one of the most amazing things about this film is its astonishing macro photography of various insects by entomologist Ken Middleham, the same inventive critter wrangler who later performed wonders with all those multi-colored ants (some with little glowing triangles stuck to their heads) in Saul Bass' spectacular Phase IV three years later. Almost as weirdly, it was directed by Walon Green, who wrote such films as The Wild Bunch, Sorcerer, and RoboCop 2 before becoming the showrunner for Law & Order: Criminal Intent, and written by David Seltzer, who went on to write The Omen and Prophecy. You can't make this up.

The film itself features a gray-templed scientist, Dr. Nils Hellstrom (Shaft's Lawrence Pressman), talking about how emotionless insects have adapted and used their unique 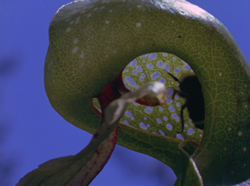 predatory and camouflage skills to not only sustain themselves on other animals but gain dominance of the planet without our knowledge. As man continues to develop greater weapons of mass destruction, insects have been steeling themselves to survive and repopulate under any conditions. Along the way you get clips from movies ranging from atomic age giant insect 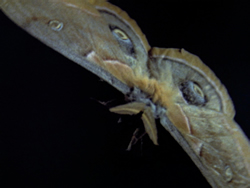 epics (including Them!, of course) to If It's Tuesday, This Must Be Belgium, not to mention a pretty eccentric music score by the mighty Lalo Schifrin.

Producer David L. Wolper cannily turned this into a hit (and an Oscar winner!) by pushing it as an apocalyptic sci-fi shocker, even double billing it with another one of his productions, Willy Wonka and the Chocolate Factory (a double whammy that probably put more than one kid into therapy). Wolper would later go on to another major documentary, Visions of Eight in 1973, but this is the one that proved to be almost as indestructible as its insect stars, playing in constant rotation on late night TV for decades and even inspiring Dune writer Frank Herbert to pen an insect-themed sci-fi novel, Hellstrom's Hive. Seen today, it's still incredibly impressive even in the wake of productions like Planet Earth. Ants, butterflies, caterpillars, spiders, bees -- you name it, you'll see them here like nowhere else. Of course, the paranoid, creepy tone of the film still makes it a wholly unique one, too, though hopefully not too many people took it seriously enough to go around kicking anthills and swatting innocent arachnids.

Olive Films' Blu-Ray release (which is also available on DVD, but really, you should see this in HD if possible) is a beautiful presentation restoring the original full frame dimensions of the 16mm-sourced footage. It's much more colorful and vibrant than it ever looked on TV or bootleg video by a long shot, with a natural filmic texture and much better compositions than when it was usually cropped in theaters (and sometimes then cropped again on the sides for home viewing). It's too bad Lawrence Pressman wasn't available to provide a pseudo-Hellstrom audio commentary, which really would've been something!