Those who think horror films before the 1960s were stodgy, lightweight affairs should be quickly directed to Benjamin Christensen's jaw-dropping Häxan, later reissued as Witchcraft through the Ages in 1967 with William S. Burroughs narration and an experimental, jazz-influenced score. Like most silent films, this cheeky, horrific look at 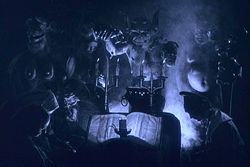 witchcraft as a form of mania has endured in various forms over the years, though fortunately no amount of tinkering can dilute its peculiar power.

Ostensibly beginning as a documentary, Häxan begins with woodcuts and period recreations to depict the rise of witchcraft in medieval times, where demons were said to roam the land and interfere with the lives of peasants. Through a series of vignettes we see the interaction of clergy and witches, with the priests either persecuting their satantic foes, suffering from the onslaught of demonic forces, or even complying with the supernatural agents. Witch hunting is depicted in an unflattering light not unlike Carl Dreyer's later Day of Wrath, and even Satan himself makes a cameo with the director made up in an elaborate, terrifying facsimile of a woodcut monster. Nocturnal witches' sabbaths, meals made of toads and children, and other unsavory elements are depicted for the viewer's edification before a truly bizarre finale which makes analogies between witchcraft and modern day technology. 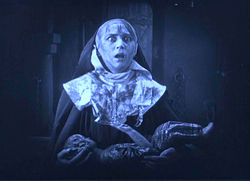 A difficult film to describe, Häxan flows along like a waking dream. Alternating between hallucinatory nightmare, black humor, and straight faced documentation, the film is never less than visually stunning and contains more imaginative visuals than any ten Hollywood blockbusters combined. Christensen would later make a brief, unspectacular move to America, where his most famous English speaking work remains the rare, highly sought after Seven Footprints to Satan, before returning to Denmark to finish out his career. Incidentally, fragments of the film later made their way into Dwain Esper's 1934 exploitation legend, Maniac, which is just as amazing in an entirely different way.

Commonly screened in its 76-minute incarnation with the Burroughs narration, Häxan has run as long as 125 minutes on home video in its slowed down VHS edition from Video Yesteryear. The Criterion DVD is a quantum leap in visual quality over the ragged prints and dupey tapes collectors have had to endure; according to the liner notes, it was transferred from a restoration overseen by the Swedish Film Institute. As with their presentation of The Passion of Joan of Arc, the original foreign language intertitles have been left intact with optional subtitles in English placed at the bottom of the screen. This method takes some adjustment at first, but after a couple of minutes the eye can be trained to read the lower text, not the words in the middle of the screen. The tinting is surprisingly effective, with a hellish rosy red glow rendered over interior scenes and a chilly blue tint added to the exterior scenes, which mostly take place at night anyway. Image quality is very crisp and clean for a film of its vintage, and the expected speckling and tearing is nowhere to be found. The Dolby 5.0 musical accompaniment (with explanatory text included from its organizer, Gillian Anderson) 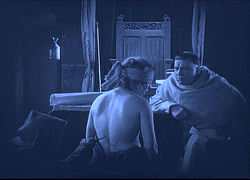 compiles numerous classical selections used in the film's premiere screening, and indeed the music enhances the off-kilter, mystical mood of the film quite well. The audio separation is beautifully rendered and keeps the film moving along even during some of the earlier historical scenes, which can be a tad dry. On a second audio track Casper Tybjerg explains the history behind the film, the production methods used by Denmark and Sweden at the time, and the various permutations of the film after its release. Generally interesting both as a look at this film and a portrait of Danish cinema at the time, this is a solid track well in keeping with the Criterion tradition.

Other extras include Christensen's onscreen intro to the film (tacked on for its unlikely 1941 reissue which probably didn't find much favor with audiences poised for war), a gallery of woodcuts, historical artwork, and texts which influenced the film's visual scheme, a smattering of outtake footage including shots of Christensen rehearsing a flying sequence, and another gallery of promotional and production stills. Of course, the biggest bonus is the alternate Burroughs version, with optional English subtitles to caption the narration. Obviously much speedier without intertitles and trimmed down a bit to focus on the "good stuff," this is the most widely seen version of the film in many countries and still holds up as a handy distillation. Image quality of this black and white edition is fine and certainly an improvement over the PD tapes, though it's in rougher condition than the Swedish edition. Overall, the original version of Häxan remains the strongest and contains the most immediacy for viewers who have grown accustomed to taking their horror with a solid dose of irony, wit, and visual flair.