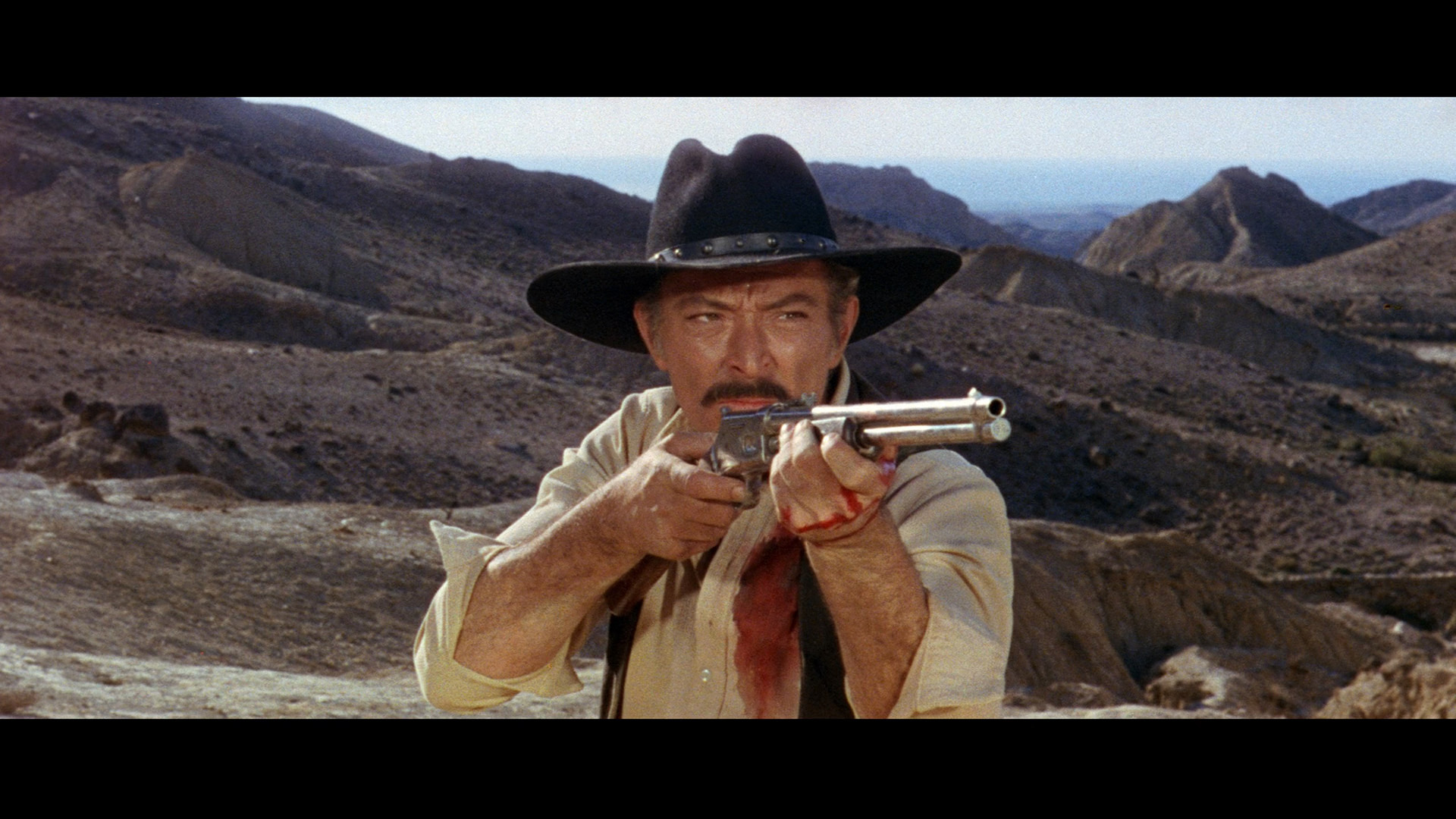 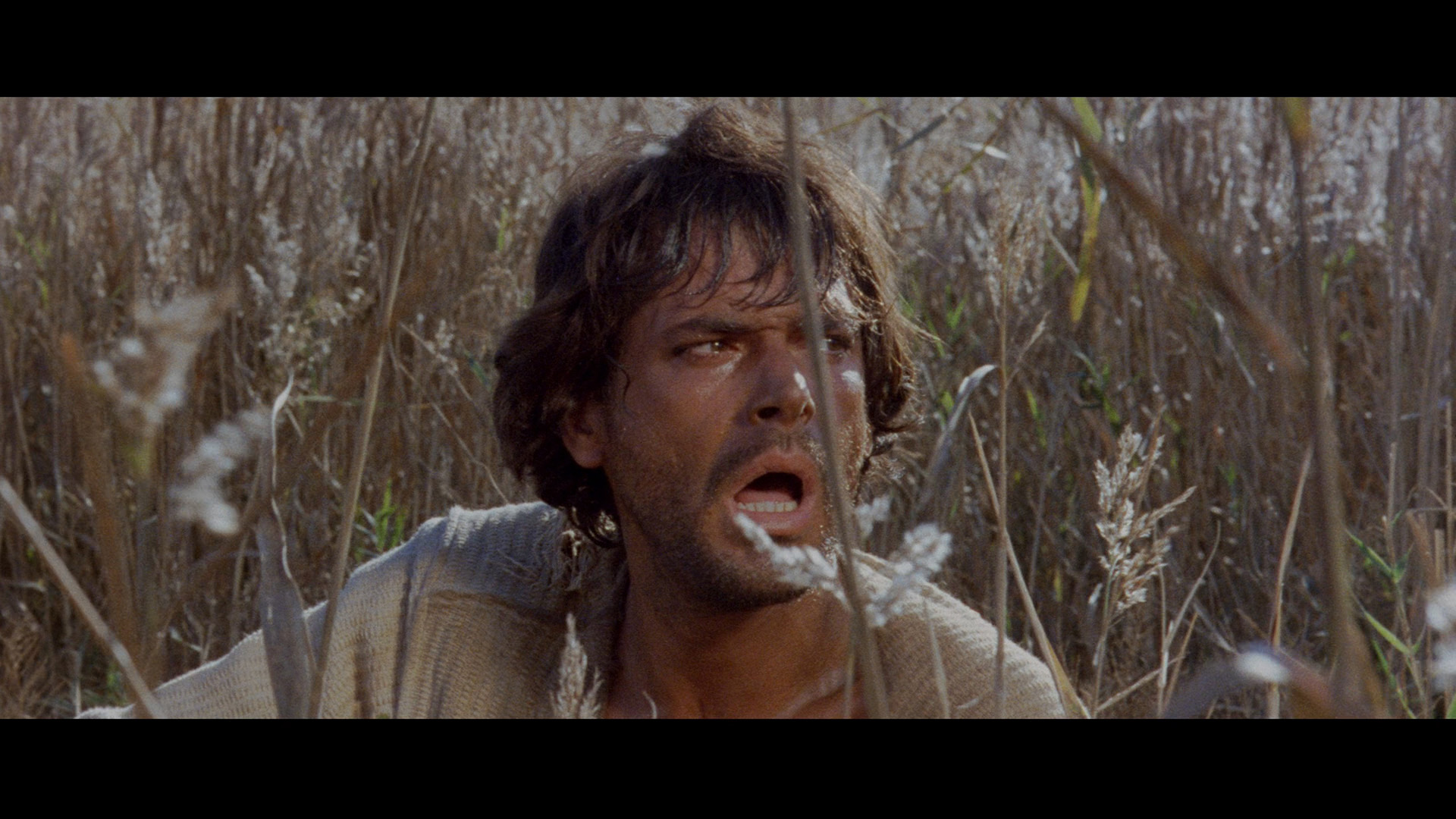 America during their heyday (when even a masterpiece like Once Upon a Time in the West was essentially thrown away by its studio), the genre has endured because of its unique combination of operatic artistry and savage social commentary. This resulted in some surprisingly audacious political statements that would have otherwise been suppressed, seen most obviously in radicalized fare like A Bullet for the General.

One of the most successful attempts to slip a subversive message into a crowd-pleasing spaghetti western was The Big Gundown (released in Italy as La resa dei conti), which opened hot on the heels of The Good, the Bad and the Ugly and managed to capitalize on the presence of the same composer (Ennio Morricone) and one of its leads (Lee Van Cleef, erroneously referred to on Columbia's American posters as "Mr. Ugly"). The film made a major European star out of Cuban-born actor Tomas Milian, who quickly went on to star in Django Kill... If You Live, Shoot!, Tepepa, and the superb Face to Face, which reunited him with this film's director, Sergio Sollima. In fact, the indelible theme song for this film (performed by Danger: Diabolik's Christy) inspired the title of its sequel, Run, Man, Run, which also featured Milian and returning director Sergio Sollima.

Mercenary bounty hunter Corbett (Van Cleef) spies a hot opportunity after his wrapping up his latest job when a powerful railroad tycoon named Brokston (Barnes) dangles a tempting carrot in front of him: a legitimate job as a government official, as long as he tracks down a Mexican fugitive, Cuchillo (Milian), accused of murder. While his 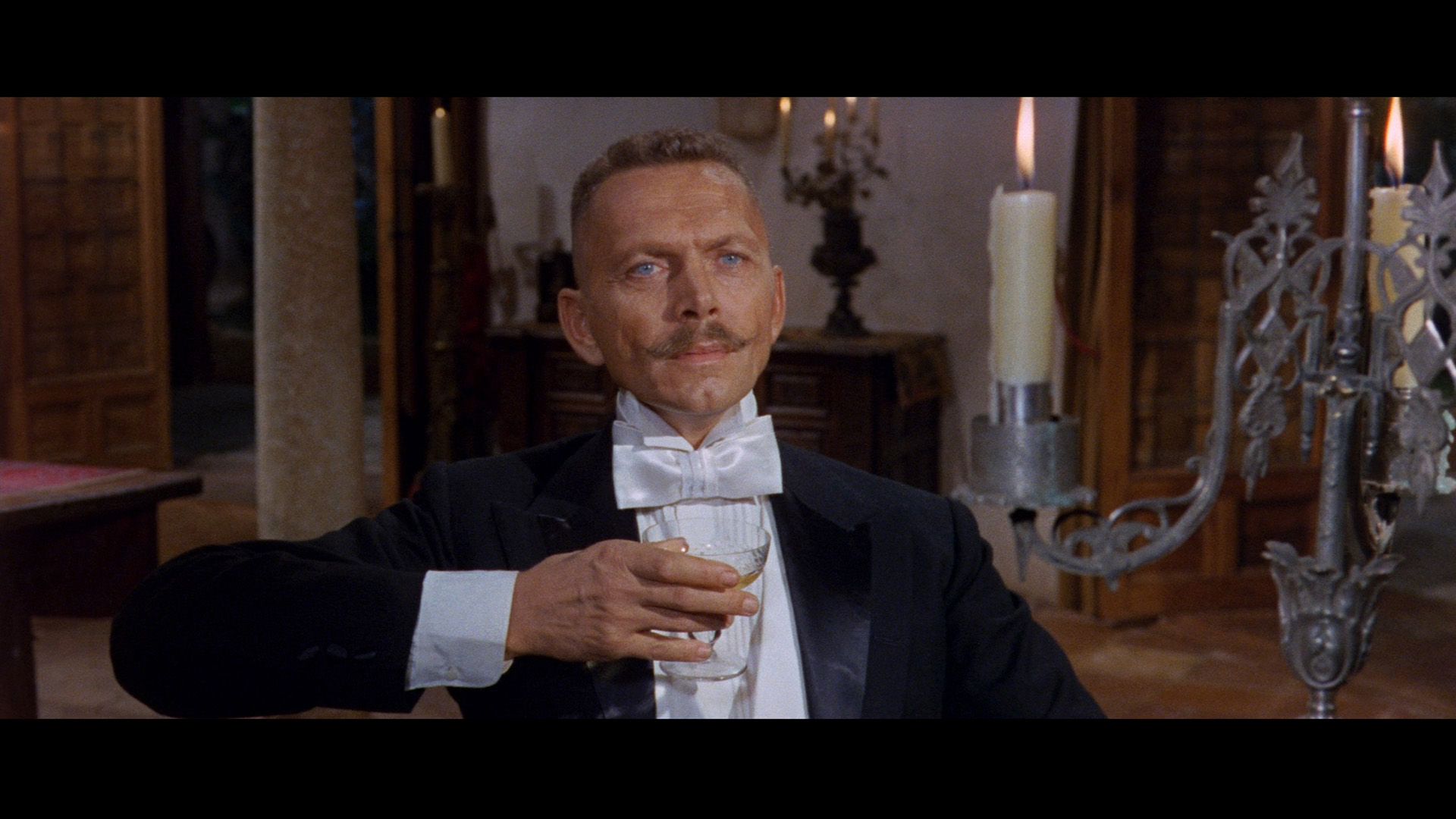 target flees through a varied cross section of American life at the time (including a stopover in a Mormon settlement), Corbett finds his pursuit complicated by the fact that all may not be as it seems with his quarry... or the man who hired him.

A powerful, fiery masterpiece of its kind, The Big Gundown has become a staple of spaghetti western retrospectives and continues to rise in critical esteem despite its relatively hit and miss history on home video. Morricone's score (one of his best from the period) has been in circulation constantly since the days of vinyl, of course, and the film's influence and pedigree would easily rank it as essential viewing, but for some reason Columbia never seemed very interested in exploiting it for American audiences after its 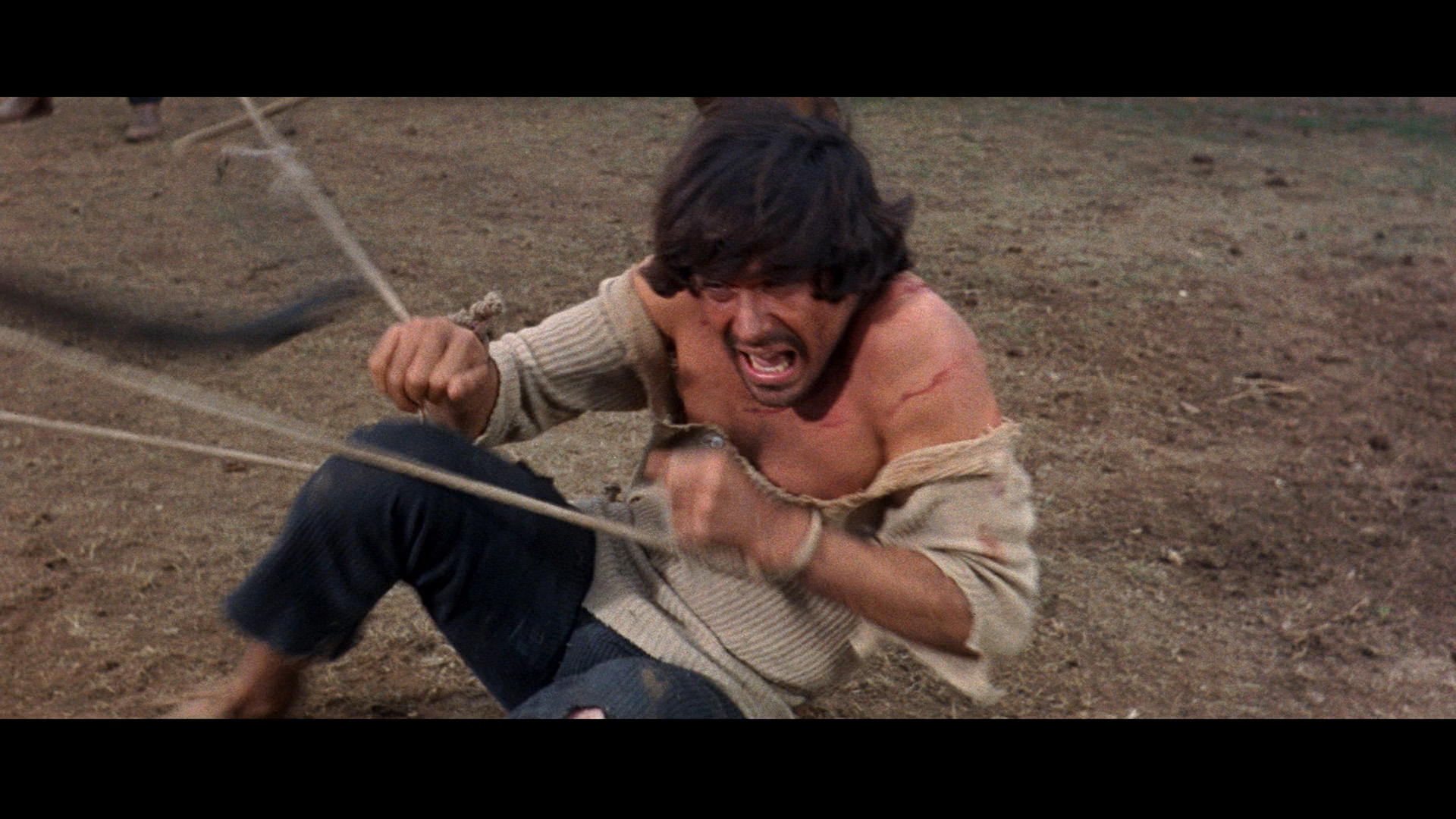 theatrical run, either on home video or television. At least in Europe it fared better, particularly with a then-miraculous German Blu-ray in 2012 containing the longest possible version running 110 minutes. As with so many of its peers, the long Italian version was never dubbed completely into English, so the missing scenes were slugged in with Italian dialogue and English subs. (It also features the full Italian and German audio tracks with optional subs in English and German.) That set contains a Blu-ray and a DVD of the feature film (plus the Italian trailer and a jukebox-style presentation of the soundtrack) and a bonus disc with a 49-minute documentary containing edited interviews with Sollima, Milian, and writer Sergio Donati, plus a reel of Van Cleef western trailers.

For its first Italian western title, Grindhouse Releasing wisely chose this one as a very welcome rescue from the Sony vaults in a manner similar to their superb job on the same studio's Corruption. The first Blu-ray contains the "extended American cut" of the film (as does the sole DVD), which means it's as long as an English-only presentation could probably be. (Think of it as a similar situation to the dual versions of Deep Red.) Running 95 minutes, it reinstates three scenes trimmed from the initial U.S. prints with existing English audio, though several heads and tails of scenes are still obviously gone along with almost all of an entire sheriff character.

Extras here include a very thorough audio commentary with C. Courtney Joyner and Henry C. Parke (who cover the film's alternate versions, the shooting locations, the careers of the main talent including giallo goddess Nieves Navarro, a.k.a. Susan Scott, and ties to other milestone westerns from the period), an isolated music and effects track, and a ton of video extras. Recorded in 2005, "Sergio Sollima Remembers The Big Gundown" features the director talking for 29 minutes about the philosophical and aesthetic rewards of the western genre, the alterations he made to the original treatment he was handed (about 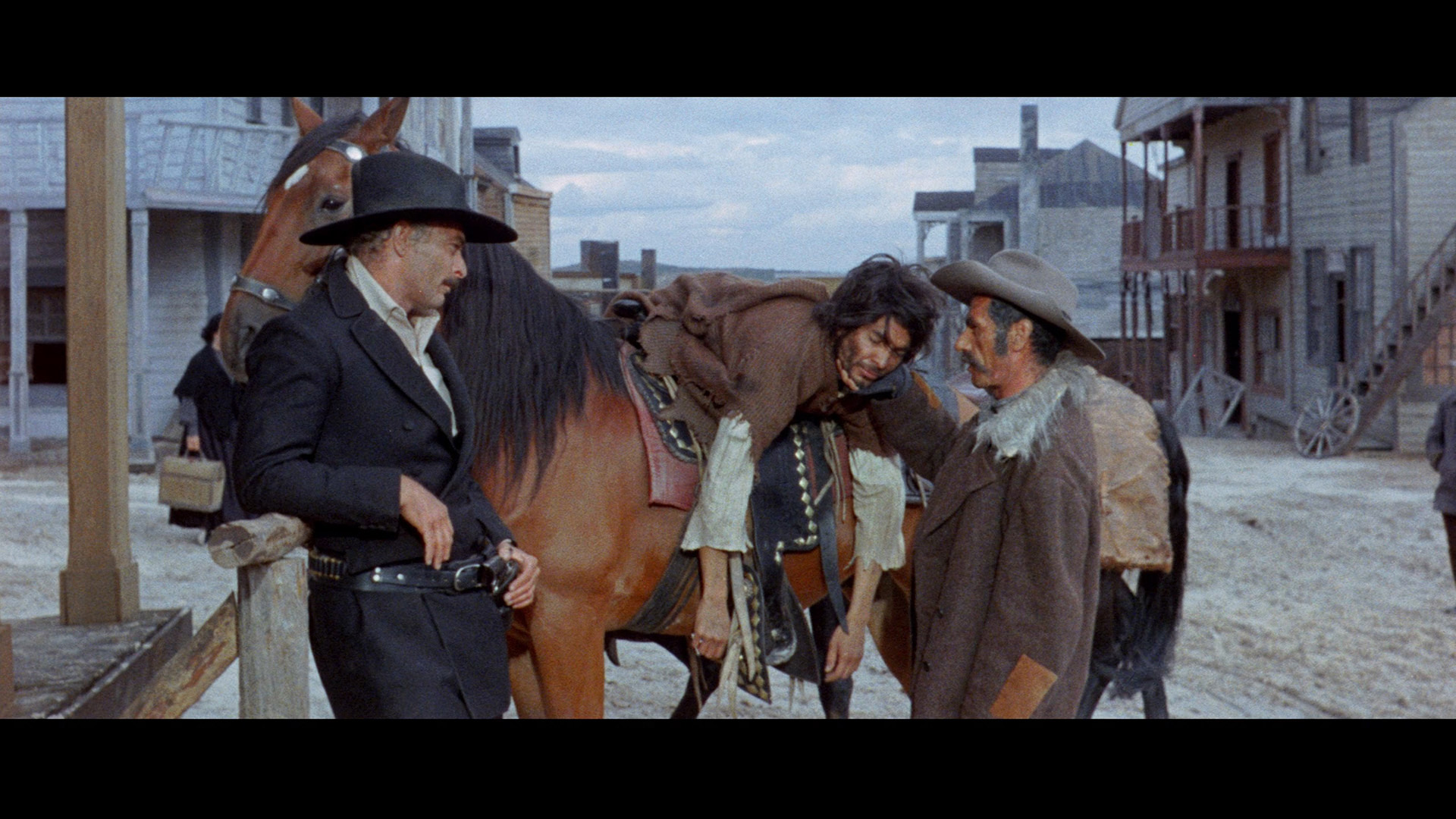 a young sheriff chasing down an old Mexican drunk), his rapport with the two stars, and the instinctive gifts of Morricone (despite the fact that he's "worked on too many films"), who could come up with miraculous music even after appearing to fall asleep during a screening. A 2011 interview with Milian (labeled as 2001 on the menu) shot in Miami also runs just under 30 minutes, with the actor speaking in English about making the film and his glory days in Italian cinema, while a 12-minute interview with Sergio Donati shot in 2013 covers the working habits of producer Alberto Grimaldi, the political origins of the original story under the title "The Hunt" with a very different ending, and Sergio Leone's crafty method of getting Van Cleef to dismount from a horse. Another 28-minute Sollima interview, "Struggles Against Genre," is also included and covers westerns more generally, including tips like emulating Toshiro Mifune and how to wrangle with producers. Not to be outdone, there's also a bonus 12-minute Donati interview from 2005 covering the genre in general, covering everything from Italian critics' disgusted attitudes to the American contemporary reactions and current critical appraisals of spaghetti westerns. Then it's off to promotional territory with a hefty gallery of production stills, separate galleries of promotional posters and other material from America, Italy, France, and miscellaneous other countries (Japan, Germany, Spain, etc.), two American trailers, the Italian trailer, five TV spots, filmographies for all three interview participants, disc credits, a DVD-Rom rundown of variations between the American and Italian cuts of the film, and a (barely hidden) bonus trailer for Run, Man, Run.

The second Blu-ray features the substantially longer Italian version with optional English subtitles, plus the isolated Morricone score in stereo and a fun trivia subtitle track. Ostensibly focused only on the music score, it points out a number of recurring motifs and facts but also goes into the differences between the two cuts, too, and how they impacted the music. Rounding out the disc is a batch of bonus Grindhouse trailers for An American Hippie in Israel, Corruption, The Swimmer, Massacre Mafia Style, Gone with the Pope, Cannibal Holocaust, Ice House, Poor White Trash 2, Cat in the Brain, The Beyond, Cannibal Ferox, The Tough Ones, Pieces, and I Drink Your Blood. There's also a fourth disc, a soundtrack CD containing the longest version released to date (identical to the 25-track GDM edition from 2012), as well as a liner notes booklet including a dissection of the making of the film by Joyner and two essays by Gergely Hubai offering a breakdown of the cuts to the American version and a more elaborate look at the creation of the score.

That leaves us with the big question: how's the transfer? In a word, great, though surprisingly it doesn't look at all like the German release. For example, take a look at shots from the German Blu-ray here and here, versus the same shots from the American theatrical version here and here. At first glance the German disc looks darker, richer, and more detailed, but it also betrays signs of artificial sharpening including some haloing in several shots. (In case you're curious, the Grindhouse extended cut looks virtually identical for most of its running time to the American one, but you can check out grabs here and here anyway for comparison.) The Grindhouse transfers also add a significant amount of visual information on the sides, which adds to the film's expansive look and allows the compositions to breathe a bit more. For a clearer demonstration, look at this shot found only in the extended version on the German release, then check out the same frame from the Grindhouse. The amped up detail on the German has harsh side effects that become very obvious in motion compared to the American release, but that should give some idea. The color timing on the German one also looks pumped up in spots, nowhere more glaringly than the opening credits; just look at this German grab compared to this one from the U.S. extended cut, which is more natural in appearance. (And just for kicks, here's a comparable frame from the American theatrical cut, which alters the main titles and drops some of the text for no apparent reason.) In short, completists will probably want both versions (since the German Blu-ray still has the option to watch the longest cut with English audio where it exists), but the Grindhouse looks like the one to beat for a long time to come.