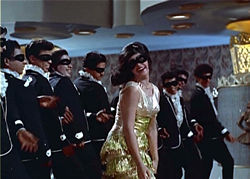 of adapting a familiar convention or story into a psychedelic feast of music and mind-warping genre collisions. Up on the chopping block this time is Agatha Christie's Ten Little Indians, first filmed as And Then There Were None, which is followed with surprising faithfulness despite the frequent detours along the way.

A planeload of random passengers is forced into an emergency landing on a very large island with only one spooky house offering refuge from the torrential rain. Representing a cross section of society, the bewildered guests include a doctor (Madan Puri), a perpetually happy dancer (Nanda), studly would-be heartthrob Anand ('60s singer and director Manoj Kumar), and most memorably, a drunken showgirl named Miss Kitty (Bollywood favorite Helen). Inside the house they see a shrouded body which turns out to be the prankster butler/cook (Mehmood, with an odd Hitler moustache), who indicates he has been expecting them all to arrive and shows them into the dining room. There they find a book indicating that each person has committed murder at some point in their lives but escaped 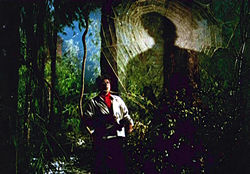 conviction, so their mysterious host has now decided to dole out punishment. One by one the visitors die over the following two evenings, but that doesn't stop them from indulging in a little beach party, a drunken duet, and an elaborate MGM-style dance fantasia in between all of the screaming and dead bodies. Christie fans, of course, shouldn't be remotely surprised by the way it all turns out.

In the sprawling Indian cinematic tradition, Gumnaam is ridiculously long considering the threadbare story, but the madcap efforts to keep viewers entertained at all costs make the running time speed by faster than one might expect. The film really kicks off with a bang thanks to the go-go number "Jan Pahechan Ho," 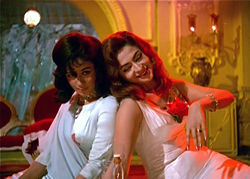 For a mid-'60s Indian title, Gumnaam looks fairly nice on DVD if not quite immaculate. The first reel in particular displays a lot of wear and tear, but colors are extremely vivid and strong and detail is satisfactory. The full frame compositions appear to be intact, so any possible cropping is extremely minimal. The disc also comes with chapter and song index pages, two very odd commercials, and the aforementioned theatrical trailer, which is almost worth the price of admission by itself.