MERMAID IN A MANHOLE / HE NEVER DIES

FLOWER OF FLESH AND BLOOD / MAKING OF GUINEA PIG

As the horror genre was cannibalizing itself almost to death in the wake of the slasher genre, cinematic gore was being pushed around the world to lengths that would eventually culminate in the '90s in Peter Jackson's unbelievably soggy Dead-Alive (Brain Dead). Before that a strong contender for the heaviest onscreen splatter was the Japanese "Guina Pig" series, a low budget string of shot-on-video exercises in 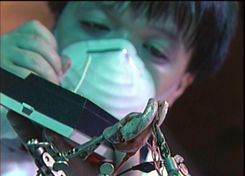 sadism which earned considerable fanfare after an apocryphal story circulated involving actor Charlie Sheen, who supposedly mistook one entry for a real snuff film and contacted the FBI. Repellent and tasteless though they may be, the Guinea Pig videos almost seem inevitable in the evolution of horror and, at least in hindsight, can comfortably be viewed as pure fiction. Thankfully the enhanced clarity of DVD makes the illusions even easier to sit through, as each ripped shred of latex and pulled punch can now be exposed without the foggy haze of a third generation VHS dupe. However, even time cannot dull the impact of the films, which purportedly inspired at least two copycat crimes, were banned in their native country, and have now become almost tame compared to the excesses of subsequent real-life psychopaths (such as the 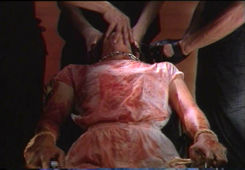 Usually referred to simply as Guina Pig, the first installment, Devil's Experiment, is a plotless study in sadism which finds three unidentified Japanese youths abducting a woman and torturing her. And, well, that's about it. She's tied up, spun around, burned, poked, prodded, kicked, pelted with maggots and animal guts, forced to listen to deafening music, and generally mistreated until the showstopping finale, arguably the most repellent act of eyeball violence 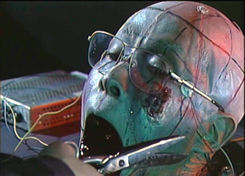 ever filmed. While movies like I Spit on Your Grave divide viewers who can passionately argue the viewpoints of characters or the sociological and gender-political implications of torture, no such depth can be found here. Sick, extreme, and highly disturbing, this remains fascinating in that something so stylized (filled with arty cutaways and POV shots) and cheaply produced could provoke an even more violent reaction than the animal killings in Italian cannibal epics. Even more perplexing is what the first two Guinea Pig films say about Japanese pop culture at the time; until the late 1990s, pubic hair could never be shown on film while any kind of atrocity could be committed without fear of censorship. Thus we have manga in which schoolgirls are violated in graphic detail by tentacled demons, "pink" films in which women are subjected to any depravity the director can dream up, and finally the logical conclusion, the Guinea Pigs. As with most extreme entertainment (to use the term loosely, of course, as most will find these unwatchable), this series gained a massive cult following through the bootleg video market even without subtitles. Not surprising, as the dialogue is largely irrelevant. 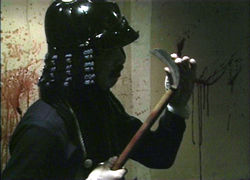 The most notorious episode, Flower of Flesh and Blood, instigated the apocryphal Sheen/FBI incident and spurred on a memorable Chas. Balun article in Deep Red; this is really video-driven sadism boiled down to its most visceral elements, a quasi-snuff sketch in which a grunting brute in a samurai costume kidnaps a young girl, ties her to a mattress, sacrifices a chicken, then carves her up for the remainder of the film while delivering giddy monologues about flowers directly to the camera. Though filled with spewing bodily fluids, screaming, and shaky, faux-realistic videography, this is less harrowing than its predecessor mainly because of the sheer hyperbole of the effects (in which every chop and hack seems to unleash torrents of blood) and the killer's bizarre appearance, which is probably meant to be some sort of commentary on feudalism's lingering fallout in Japan. Or maybe not. Adventurous viewers may want to pair this up with the earlier Japanese abduction/limb-removal study, Blind Beast, for a particularly harrowing double feature. Appropriately, the U.S. disc of Flower is packaged with The Making of Guinea Pig, a clinical behind-the-scenes chronicle of the extremely wet latex effects required to pass off each dismemberment and disembowlment. Even after this hour long documentary became an official part of the series on the video gray market, stories lingered for years about the verisimilitude of certain sequences. 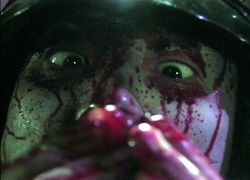 Fortunately this speculation tends to be dispelled for most viewers upon watching the third Guinea Pig film and its successors, all of which are more cartoonish and wildly varying in quality. The third released entry, Android of Notre Dame, is a much "safer" viewing experience. Sort of a post-splatter remake of The Brain that Wouldn't Die, this follows the misadventures of a demented dwarf scientist (Toshihiko Hino) who conducts experiments involving the yammering, rotting severed head of an extortionist to save the life of his stricken sister. He then kidnaps a woman and performs some perfunctory gore procedures on her before the morose finale. Filled with ranting, raving, and ludicrous gore FX (including a disemboweling that's more silly than it is sickening), this is an odd and frequently perplexing piece of cartoonish grue to say the least. 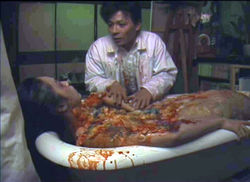 The cinematic equivalent of a kid gleefully showing off his chewed-up food, Mermaid in a Manhole strives for a combination of poetic, Night Tide-style fantasy and stomach-churning goo, with the latter ultimately winning out. Renowned artist Hideshi Hino, who anonymously helmed Flower of Flesh and Blood, returns here for a more traditionally structured mood piece in which an art teacher and struggling painter (Shigeru Saiki) discovers a beached mermaid (Mari Somei) in a sewer. He recognizes her from a childhood sighting, though now the depletion of rivers has left her to hide underground. He takes her home and keeps her in a bathtub while he determines to only paint her portrait, a process which becomes more difficult once sores begin to infest all over her body. Withdrawing from everyday life to the 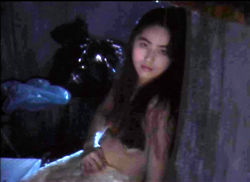 consternation of his neighbors, the artist eventually resorts to using the mermaid's multi-colored, infected fluids to complete his canvas... but things go even further downhill. Complete with slithering worms, dismemberment, and an especially nasty nasty finale, this not for anyone even remotely squeamish and definitely marks a step up from the previous entry. At 63 minutes, it's also one of the longer installments in the series and feels the most like a complete film.

Then we switch gears to goofball comedy with He Never Dies, whose title sums up the entire conceit. Flatly shot on what appears to be very cheap video equipment, this oddball piece documents a depressed Japanese businessman's attempt to commit suicide after being dumped by his girlfriend. In gruesome detail he slits his wrists but doesn't even feel weak. Realizing he cannot die, the grinning loony resorts to driving pens through his hand, slashing his throat, and eventually earning revenge against his girlfriend and a romantic rival by... well, it isn't pretty. While the wrist-cutting is horrifically effective, the rest of the effects are graphic but more playful than anything else, buoyed along by the quirky music 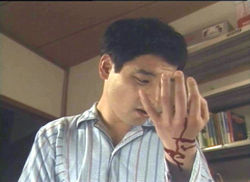 and the lead's gleeful mugging to the camera. Unfortunately the amateurish photography severely counteracts what appears to be an attempt at a hardcore splatter version of a situation comedy, though the jokey end credits sequence is definitely one-of-a-kind.

Considering they were shot on video, the Guina Pig episodes translate to DVD surprisingly well. Image quality is faithful to the original scrappy visual scheme (grain, lens flares, and bad focus turn up now and then), while detail is razor sharp and several generations about the VHS editions so prevelant for over ten years. Android fares the best overall as it was shot with a much

slicker visual texture and features some striking color compositions. Unfortunately, Mermaid suffers the most from some distracting compression errors during the fog-ridden sewer opening and some darker passages, but otherwise these look much better than those dupey videos. The optional subtitles are also welcome, as they at least offer some semblance of structure for what used to be rambling studies in depravity. The disc of Flower is the slickest of the bunch, with striking motion menus and an array of extras including two interviews with director Hideshi Hindo, a gallery replication of his original Flower of Flesh and Blood manga (which boasts a far more elaborate narrative set up), a photo gallery, a text history of the series, and seven trailers. Viewers with PAL compatible players can also pick up the entire set from Germany in a region free boxed edition (limited to 3000 copies), which comes with a T-shirt and poster. Choose your poison carefully!