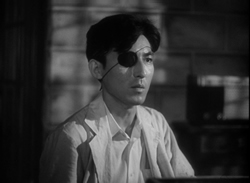 Ground zero for the pop culture invasion of Japanese cinema into the West alongside the more respectable imports of Akira Kurosawa, Godzilla has been the subject of so much study, imitation, and parody that unprepared viewers are understandably shocked when confronted with the original film that started it all. Most Americans first met the giant prehistoric lizard with radioactive breath and a killer tail when he shuffled into screens alongside Raymond Burr, playing a reporter (named Steve Martin, way before the comic) witnessing all the havoc wrought in and around Tokyo. However, as monster film fans eventually found out, that's not the movie director Ishirô Honda made; the original version, Gojira, was a dead serious reaction to the nuclear horrors dropped on the country near the end of World War II, and it definitely didn't have Raymond Burr. 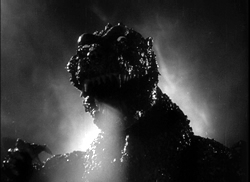 The biggest baby ever birthed by Toho Studios begins with the mysterious destruction of a fishing boat by a bright blast of light, and recent H-bomb tests have apparently unleashed -- or perhaps created -- something nasty from the depths of the sea. Military officials and scientists soon come to realize that a monster is loose in the area, and as the attacks move to dry land leaving giant footprints behind, it's obvious that Tokyo lies directly in its path. The only possible salvation lies with the eyepatch-wearing World War II scientist Dr. Serizawa (Hirata, who appeared in numerous subsequent Japanese monster movies known as kaijū eiga), who is experiencing extreme moral anguish over his devastating new weapon, the Oxygen Destroyer.

Still a powerful and somber statement about the devastating effects of science used for warfare, Godzilla is a dark, sometimes frightening, and ultimatelymoving variation on the classic giant monster formula which had already been popular since the days of King Kong. The decision to link Godzilla himself to the horrors of Hiroshima and Nagasaki results in several chilling sequences, including some 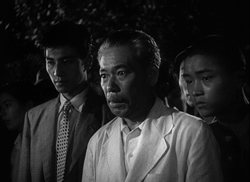 pointed dialogue references and scenes of wounded victims with burns and bleeding wounds being treated after the attacks. These elements were of course downplayed in later films, with Godzilla rising from his ashes (or in this case, his watery grave) to become significantly less malevolent when pitted against or teaming up with such monsters as Mothra and Ghidorah. Eventually the character became something of a juvenile favorite (even spawned a son) and even inspired a cartoon series, eventually resurrecting again from Toho in the '90s for a new run of films with revamped special effects and climaxing in the curtain drop of Godzilla: Final Wars (which closely followed a dire American version which we'll all pretend never happened).

Fans eager to see the original Japanese version with English subtitles were frustrated over and over again, particularly in the late '90s when Criterion announced a laserdisc release only to pull it before completion. A theatrical reissue of the subtitled version soon followed in a handful of art theaters, but no legitimate home video version was to follow for many years. Rialto eventually trotted the subtitled version out on a much larger scale in 2004, bringing far more awareness to the nature of the film's initial conception (and also inspiring a particularly condescending Ro 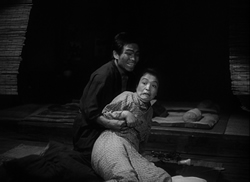 ger Ebert review). Australia released the first official English-subtitled version courtesy of Madman shortly after the theatrical run, while at the beginnig of 2006, the UK got its own release from the BFI. Later that year American finally had its premiere version of the original Gojira from Classic Media, packaged with the American version (whose full title is still Godzilla, King of the Monsters). This version seemed fine on DVD, but its leap to Blu-Ray in 2009 offered very little visible improvement; in fact, the 1080i transfer looked substantially worse as the increased resolution revealed the inherent dullness of the source material and magnified all of its many, many flaws. On the positive side, this release contains some worthwhile extras including an informative commentary by writers Steve Ryfle and Ed Godziszewski, a pair of solid featurettes ("Godzilla: Story Development" and "Making of the Godzilla Suit"), and the Japanese and American trailers. Interestingly, both men also provide an additional commentary for the American version along with Terry Morse, Jr., son of the man who directed the additional sequences with Raymond Burr. It should be said that, as occasionally silly as it is, the American Godzilla reveals an unusual amount of effort and care for an import; general audiences at the time were still wary of foreign films (and one could argue that's even more the case now), and the clever methods used to make the story palatable for English-speaking viewers are fascinating to behold. Classic Media also went on to provide excellent special editions of many subsequent Godzilla titles, all of which are highly recommended and worth picking up.

Decades are being stymied from a laserdisc release, Criterion finally got a crack at the screen's most perenially popular giant monster with its 2011 Blu-Ray edition (also released on DVD, but really, you might as well catch this one looking as good as possible). Thankfully the transfer here is by far the best option available and in many respects surpasses what was seen in the Rialto reissue prints. Several sequences still have those familiar emulsion scratches (which appear to be damage in the original source, since they were carried over identically into the American cut), but the contrast, clarity of detail, and overall depth are much improved over the prior Blu-Ray. Daylight scenes in particular show marked improvement (as the night scenes were never all that crisp to begin with), and the English subtitles appear to be similar and perhaps identical to the Rialto prints as well. The American edition is included here in a new hi-def transfer as well (with that Transworld logo at the beginning), and it looks absolutely sparkling; the added scenes look very clear and now stand out even more compared to the grittier texture of the original feature. There's also a completely different and much more extensive slate of extras this time around, with David Kalat (who provided those awesome Dr. Mabuse commentaries and penned A Critical History and Filmography of Toho's Godzilla Series) doing chat track duties this time around. He offers his own historical overviews of the film, covering the multitude of differences between the cuts, explaining how the project began at Toho, and offering details about the creation of the sets and the iconic monster costume. Actors Akira Takarada (who played Ogata) and Haruo Nakajima (the man in the Godzilla suit) appear in new video interviews, as do special effects technicians Yoshio Irie and Eizo Kaimai (for an amazing half-hour chat -- "They called us yakuza, madmen!") and legendary composer Akira Ifukube, who gets a whopping 50 minutes to discuss his beloved work on the film series including his creation of his memorable Godzilla march and accentuating the variety of emotions within the film. These also contain a wealth of great behind-the-scenes stills and lots of fun anecdote, including recollections of watching audience's faces during the film; however, the highlight has to be Nakajima demonstrating his swivels and head turns he had to perform in the suit. Japanese critic Tadeo Sato gets a 14-minute interview in a separate area of the supplements in which he focuses on the film's legacy and importance to Japanese film culture, while a photographic effects demonstration by FX director Koichi Kawakita and photographer Motoyoshi Tomioka covers the trick imagery involving people, trains, power cables, and of course, Godzilla himself. An audio essay entitled "The Unluckiest Dragon" features writer Greg Pflugfelder discussing the horrific real-life nuclear incident which inspired the opening sequence of the film, and the disc rounds out with the original Japanese trailer with English subtitles. (The packaging indicates the American trailer's in there as well, but it must be awfully well hidden.) While the Classic Media version is still worth holding onto (mainly if you have it on DVD) due to the alternate supplements, the Criterion is by far the defnitive release of this important film to date and should have no problem delighting seasoned monster movie fans while inaugurating quite a few new ones as well.