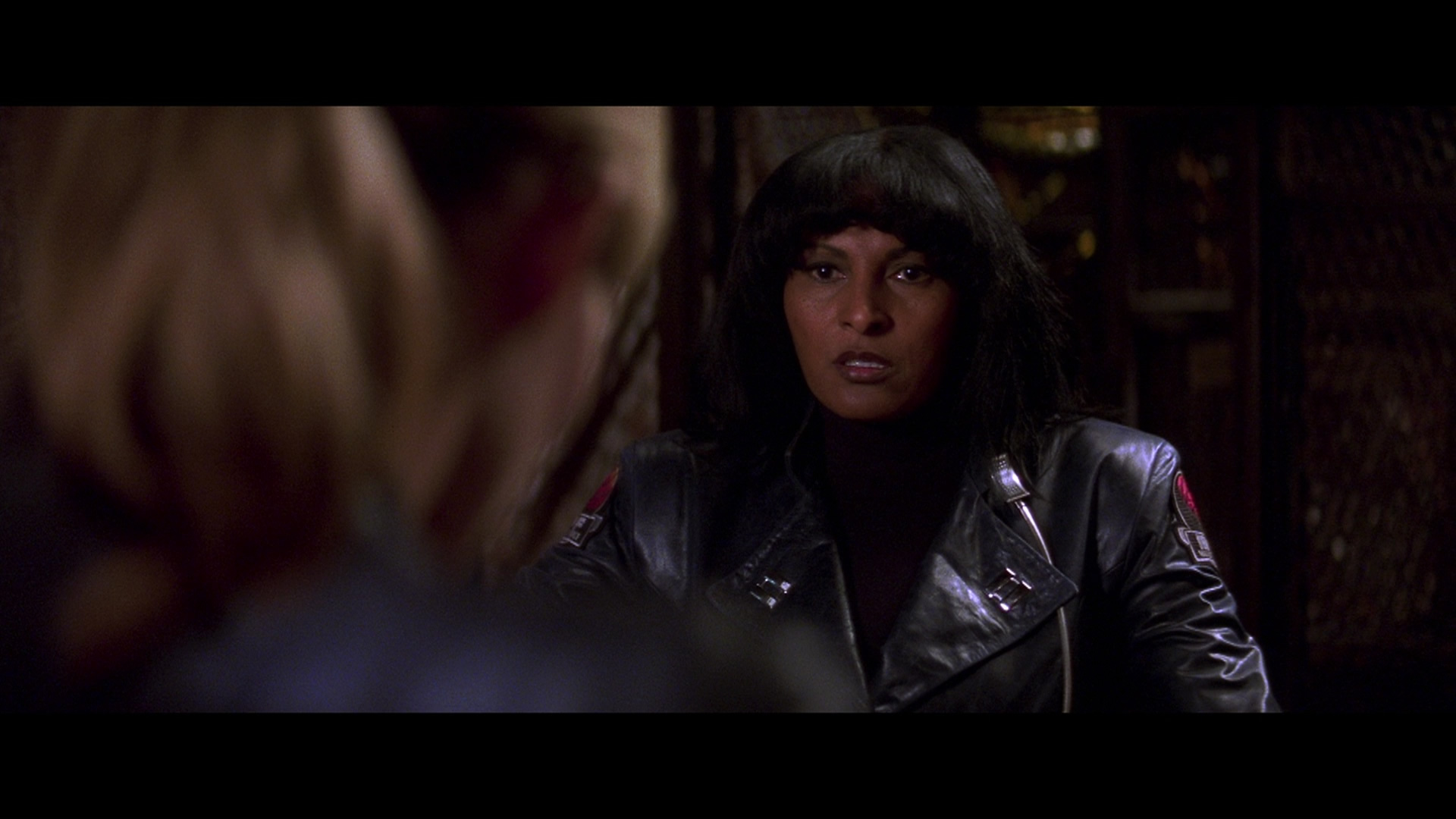 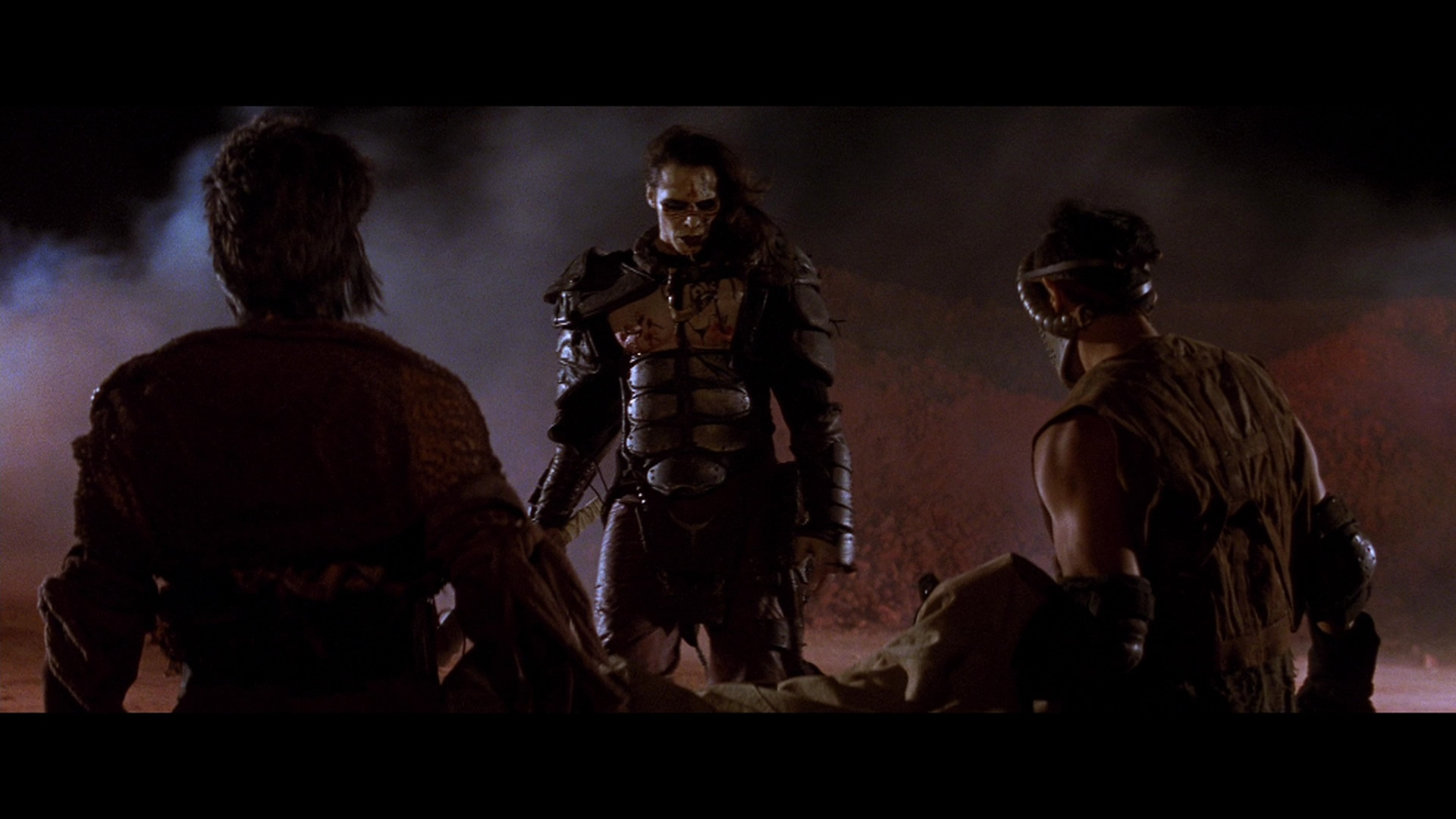 Three years after bringing the public a vampire-western hybrid, John Carpenter tried to pull the same trick again for space monsters with Ghosts of Mars, a late entry in the very short-lived wave of Mars-themed movies on the heels of 2000’s Red Planet and Mission to Mars.   Originally planned as the third Snake Plissken film, the script (which also pulls many elements from Carpenter’s Assault on Precinct 13) morphed into a very odd beast and a stressful production that seemed likely to be the director’s big screen swan song for another nine years. Needless to say, it also features one of the nuttiest casts of its era.

In the 22nd century, a desolate train pulls into a Martian city with only one passenger: Lieutenant Melanie Ballard (Species’ Henstridge), an officer who’s pulled into an investigation to find out what happened on the remote mining outpost of Shining Canyon. In flashback she relates how she was sent there to retrieve convicted killer Desolation Williams (Ice Cube), who insists he’s innocent. As it turns out she had to face much bigger problems when the title beings are released on the local populace, resulting in a horde of murderous, possessed goth miners.  Soon she and her quarry are teaming up with a handful of other fighters including Bashira (Duvall), Jericho (Statham), Helena (Grier), and Whitlock (Cassidy) to fend off the alien threat and try to get out alive.

A tricky beast in the Carpenter filmography, 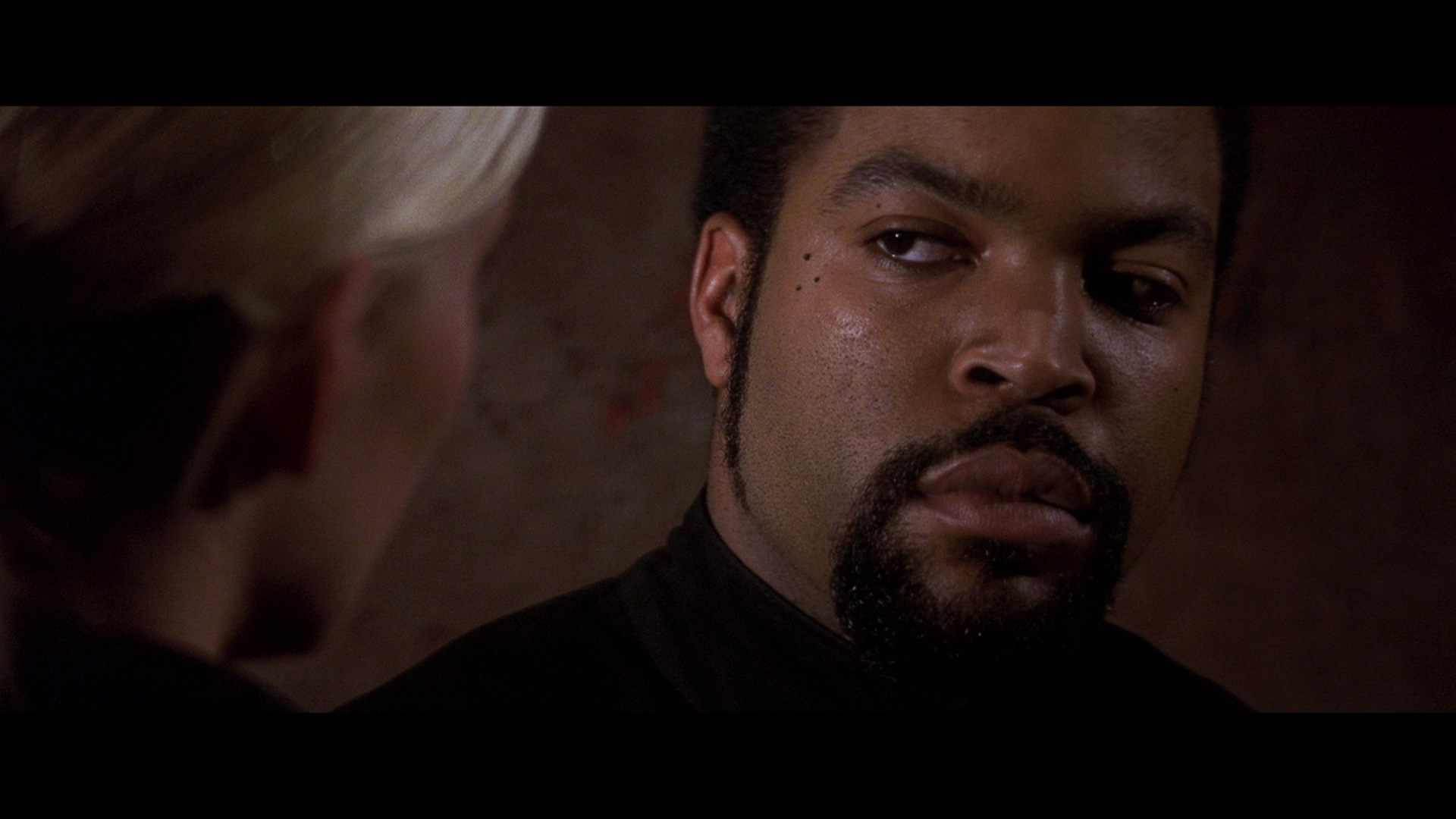 Ghosts of Mars was largely panned when it came out (Roger Ebert was a notable exception) but has managed to remain a steady home viewing favorite over the years, largely thanks to the hefty doses of typical tough Carpenter dialogue, swaggering western clichés amusingly tweaked to the outer space setting, and a peculiar atmosphere that could best be described as a SyFy Channel aesthetic on acid. 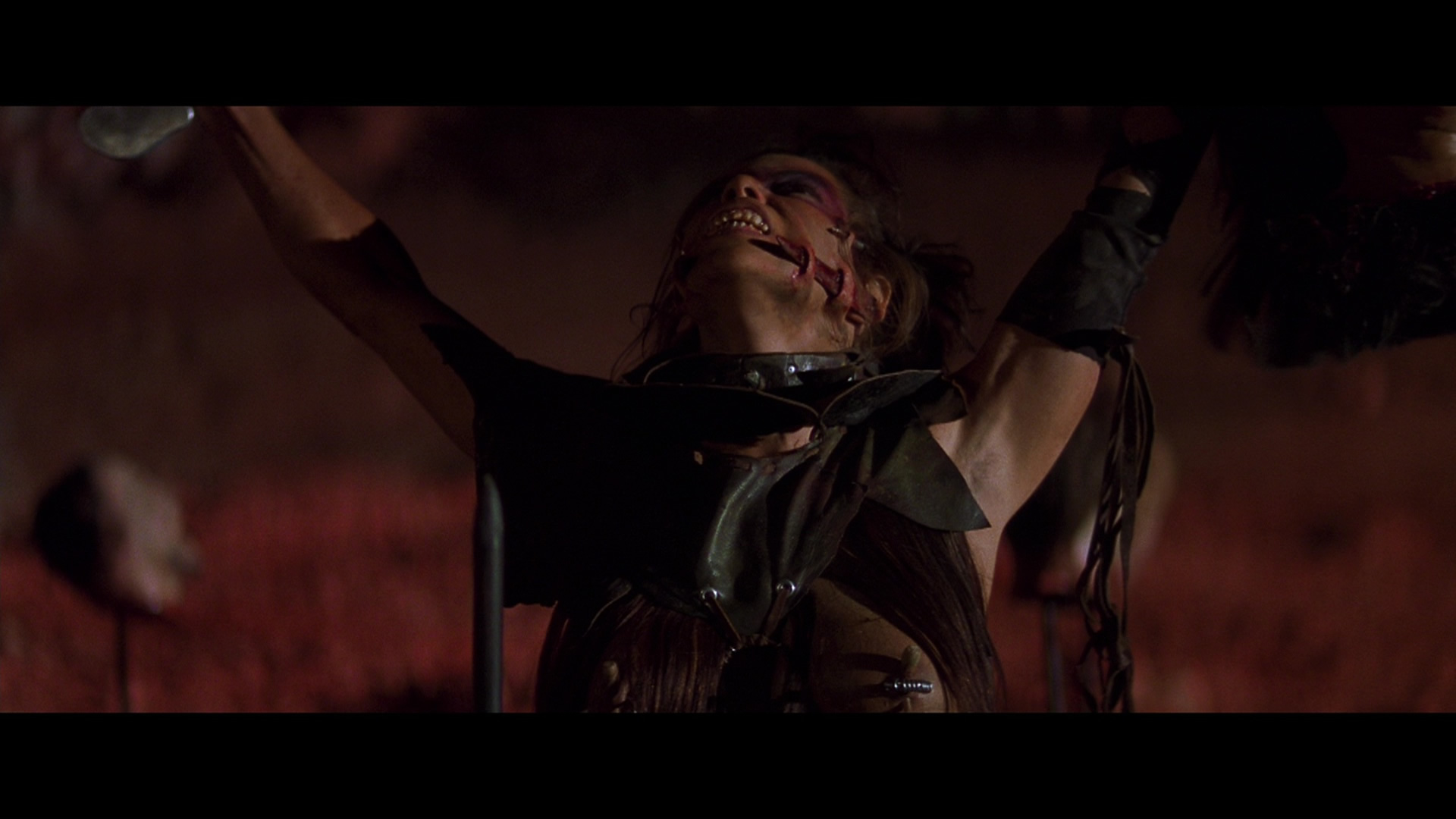 The bizarre editing rhythms can also be very distancing on a first or second viewing (especially those long random dissolves he first introduced in Vampires, which get used to death here), but once you’ve become acclimated to the film’s environment, there’s plenty of fun to be had with its lengthy siege sequences, the novelty value of seeing Pam Grier and a young Jason Statham rubbing shoulders in the same film, and the expected doses of comic book violence including the ghosts’ habit of mounting their victims’ heads on sticks.

After a lackluster theatrical release from Screen Gems (the genre arm of Sony Pictures), Ghosts of Mars bowed on DVD in late 2001 from Sony with a US Blu-ray following in 2009. Both sport the same bonus features, namely a fairly spirited Carpenter and Henstridge commentary (easily the breeziest one by the director from this period), a 16-minute “Red Desert Nights” video diary packed with behind-the-scenes footage, a 6-minute “Special Effects Deconstruction” featurette (it’s especially fun seeing the miniatures in action), a 6-minute “Scoring Ghosts of Mars” featurette (showing Carpenter at work with Anthrax and Buckethead to create the very hard-driving, guitar-heavy music score), and (on the DVD only) cast and crew filmographies. There’s a lot of fun trivia to be found in the extras, particularly the fact that Courtney Love(!) was originally cast in Henstridge’s part with other actresses considered along the way including Michelle Yeoh and Famke Janssen.

In 2017, UK label Indicator revisited the film for an expanded special edition complete with an improved encoding of the main feature that notches up in terms of film grain definition and image depth thanks to nearly seven years of technological improvements in video compression. It isn’t a night and day difference, but the 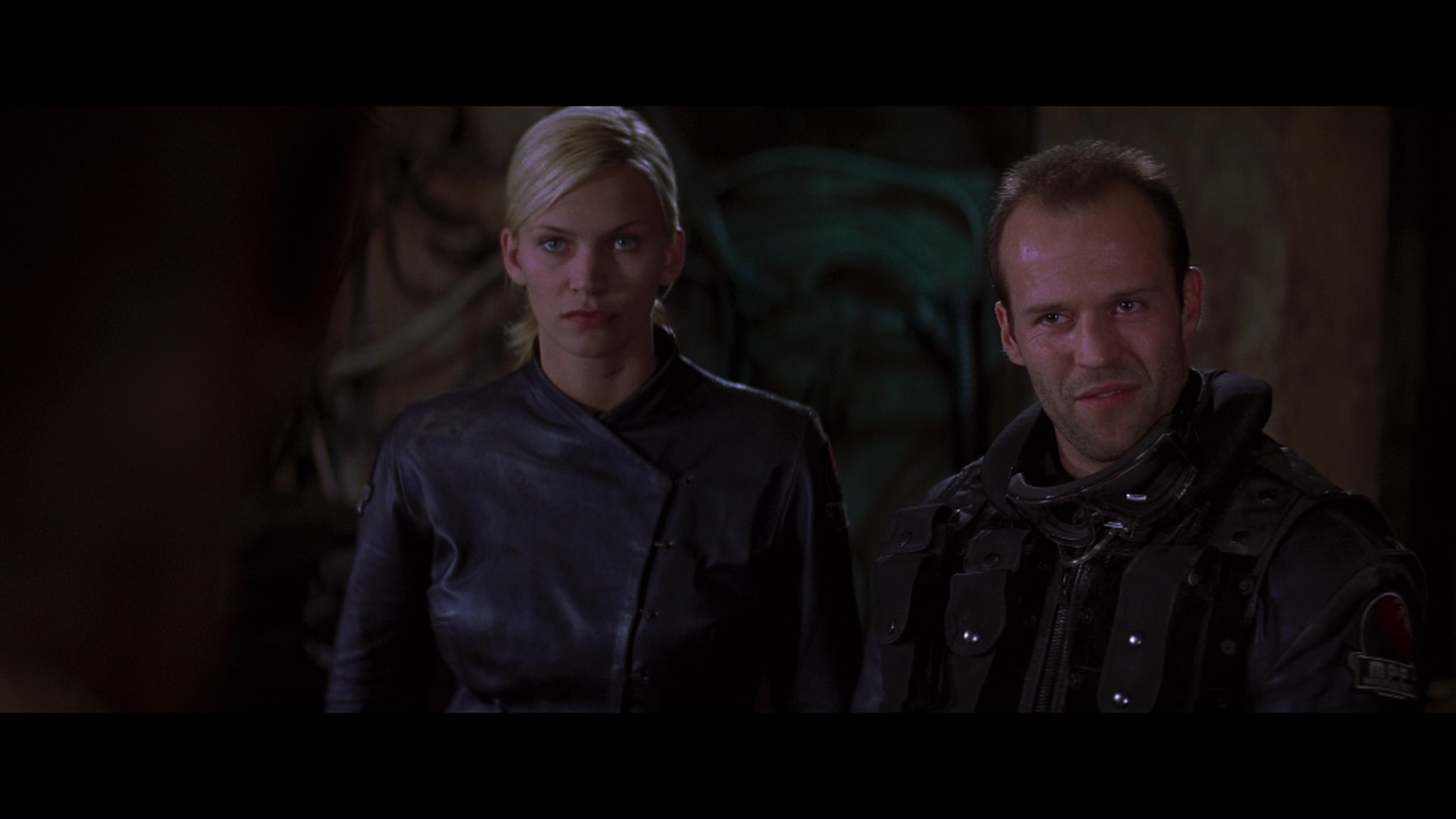 upgrade value is definitely there especially if you have a larger screen. Audio options include English DTS-HD MA 5.1 and 2.0 tracks (with optional English subtitles) and the audio commentary, while the three featurettes from the Sony release have been carried over. New to this release are the (awful) original trailer (left off prior editions in the usual Sony fashion), 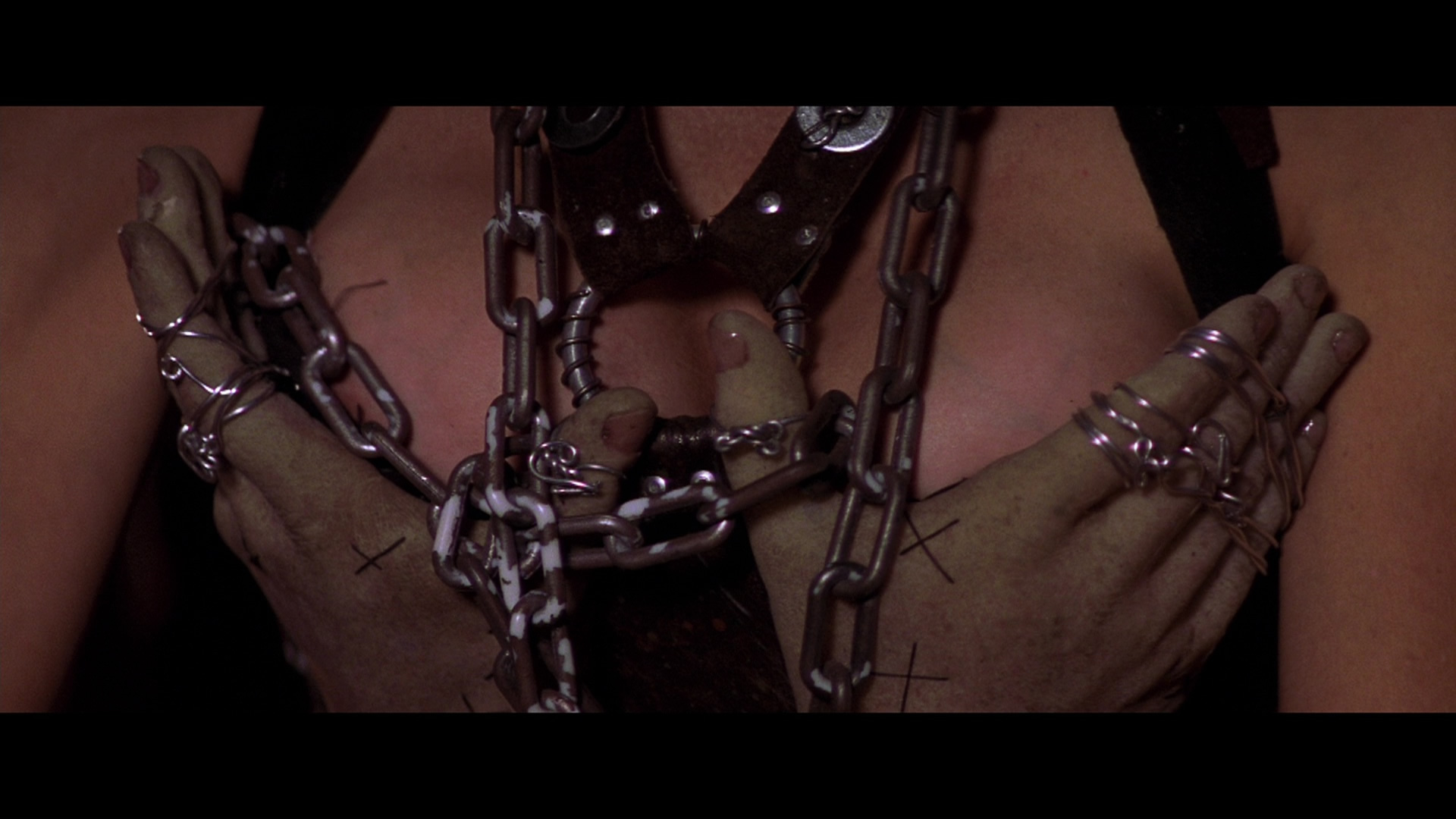 a gallery of production art concept designs, and most substantially, part two of The Guardian interview with Carpenter (41 mins.), from the director's Q&A with Nigel Floyd at the National Film Theatre in 1994. (Part one can be found on Indicator’s release of Vampires.) This portion picks up with Starman and goes through Memoirs of an Invisible Man and onward, offering a portrait of projects going up and down through budgets big and small and zig zagging through a multitude of genres and topics ranging from Jeffrey Dahmer to H.P. Lovecraft. It's also amusing to hear Carpenter mourning the retirement of George Miller from the big screen and giving a shout out to a newcomer named Quentin Tarantino.

The limited 5,000-unit, dual-format edition (Blu-ray and DVD) also contains a liner notes booklet by Nick Pinkerton, a major extra in and of itself contributing a lengthy assessment of the film as a swan song to Carpenter's big-scale genre efforts and a subversive bit of gender upending with its portrayal of a matriarchal society on Mars. A 2001 interview with Carpenter by Marc Shapiro for Starlog along with some bonus production sketches.