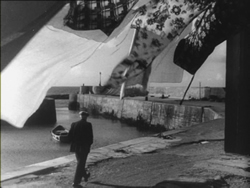 A sprawling, nonlinear depiction of the British coastline since 1901 might sound like something that only a niche audience could enjoy, but From the Sea to the Land Beyond turns out to b 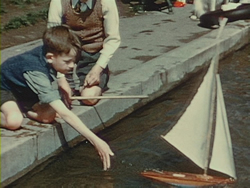 e a real shocker in the most positive sense: a dazzling, emotional collage of captured, unscripted cinematic moments from Britain's relationship with its omnipresent coastline, culled from hours and hours of footage preserved in the BFI archives (with a couple of extra outside additions).

To British viewers, the experience of watching this will be most likely have an intensely personal impact as the the past unfolds in alarming clarity stretching back to everyday Edwardians milling by the sea, courtesy of the Mitchell & Kenyon collection uncovered in the 1990s. It's a logical starting point here, but if even for those unfamiliar with the exact geographic landmarks, there's a strange emotional rush watching the past century unspool one frame at a time with only the undulating tide pulling it all together. You'll see preparations for war, men and women laboring together in shipping yards, families on holiday frolicking on the beach, and people scrambling for food and treasures in the nearby rocks. It's all impeccably assembled and edited, with the sudden rush into color footage packing a particular jolt (that beautiful 1950s film stock!) and gradually leading to the takeover of video in the 1990s (with 1999 being the cut-off point here). 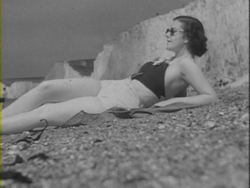 her BFI releases is well represented here) rubbing shoulders with anonymous footage shot by countless people over the decades. However, the real deal clincher here is the magnificent soundtrack by British Sea Power (whose name alone probably got them the gig!), one of the UK's most respected indie rock bands. Their music here is terrific stuff all the way, occasionally recalling everyone from Philip Glass to Dire Straits and The Cure in its rhythms but maintaining a powerful identity all its own. Much of the visceral charge here comes from the way the music surges from one era to the next, turning a simple image of swimmer on a sandy beach into a stirring moment of filmic grandeur. (Here's a little teaser just to give you an idea.) 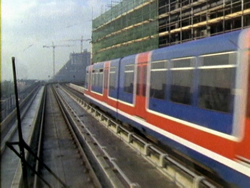 Following some well-received screenings with live performances of the score by British Sea Power, From the Sea to the Land Beyond comes to DVD as a fine edition from the BFI with some nice extras to boot. Since we're dealing entirely with archival footage here, the image quality obviously varies a bit; interestingly, the '90s interlaced video footage fares worst (but only rears its head near the end), while the surprisingly pristine early 1900s shots all the way through the '80s look terrific. The two-channel stereo soundtrack sounds excellent, as it should for something newly recorded. (It's tempting to wish for a soundtrack release, though split from the visuals it might not have the same impact.) Another nice feature is an optional "Film and location identification track," basically a subtitle stream ID'ing each original film source and the location at which it was shot.

Some of the films sourced for the feature are also included as special features in their entirety: "SS Saxonia in Liverpool" and "Cunard Mail Steamer Lucania Leaving from America" (the 1901 Mitchell & Kenyon ones used at the beginning), Marion Grierson's 1935 "Beside the Seaside" portrait of vacationers, Ralph Elton's 1943 "Worker's Weekend" (shot at the Vickers Armstrong factory in Broughton), and Alan Harper's 1947 fishery short "Caller Herrin'," all with intros by the film's director, Penny Woolcock. She also appears along with producers Heather Croall and Mark Atkin as well as British Sea Power for a 24-minute featurette about the making of the feature, laying out the basic edicts in place when it began and the process of pulling it all together and showing it to an audience. You also get a five-minute peek at British Sea Power composing and performing the score. The liner notes booklet also contains some insightful and genuinely worthwhile reflections on the film by Woolcock (whose observations on women's roles throughout the historical timeline are especially eye-opening), a brief "Beachcombing the BFI National Archive" essay by the BFI's Tony Dykes, a useful bio/personal essay on British Sea Power by Roy Wilkinson (the band's former manager and brother of two of its members), and additional comments on the extra short films. A very satisfying and strangely haunting release, well worth discovering both for its visual history of Britain and a truly remarkable soundtrack.