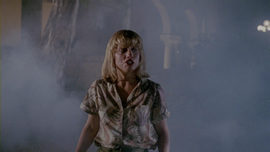 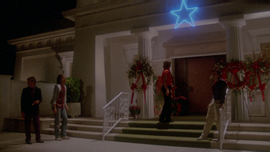 An odd fusion of old-school horror and slasher shocks, this ragged but charming California-lensed indie is easily the most memorable starring vehicle for Ferdinand "Ferdy" Maybe, a colorful character actor who enlivened such films as The Fearless Vampire Killers, Night Train to Terror, and Barry Lyndon. Here he gets to chew the scenery with abandon as Conrad Radzoff, "the last of the great horror stars," who's reduced to shooting TV commercials and harbors a nasty murderous streak.

We find out about Radzoff's homicidal tendencies early on when he grows frustrating with the insults of his director, whom he shoves off a balcony with his cane. Soon after the thespian suffers a heart attack during an appearance for a college's horror film society and gets carted back home, where he expires just after using the last of his energy to snuff out his opportunistic manservant. He leaves behind a grieving widow (Pilavin) at his funeral, for which he's specially recorded a videotaped message to the attendees. In fact, he even has taped greetings planted in his elaborate mausoleum, which several of the college horror fans target to break in that night to honor his memory in a more unorthodox fashion. Some clowning around soon leads to them hauling his body out of the coffin and dragging it to their improbably elaborate, antiquated headquarters, a spooky mansion festooned 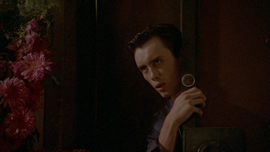 with horror posters and a former shooting location for some of Radzoff's biggest hits. The widow soon learns of the body's disappearance and orchestrates a seance, which of course results in the dead actor soon rising up in a foul mood looking to dispatch justice on those who disturbed his eternal slumber. 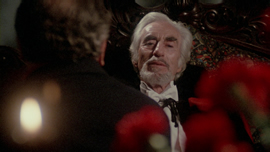 In case you're wondering why that synopsis doesn't include a description of the college kids, that's because the film pays so little attention to even giving them names or character traits that this makes Jason Goes to Hell look like a multi-layered exploration of the human condition by comparison. The bizarre structure of the story barely even establishes who they are and has them clowning around for several minutes before they even use anyone's first name, but among them are a very young Jeffrey Combs (in between his funny brief bit in The Man with Two Brains and his star-making turn in Re-Animator) and busy character actor Luca Bercovici, also looking incredibly young. It's likely the film's script or first cut was whittled down since the time frame doesn't make much sense either, with constant jumps between afternoon exteriors and night time mayhem making it feel the whole thing is unfolding over a week with everyone sitting around with nothing to do but get killed. Fortunately if you allow your brain to switch off any kind of logic requirements, there's plenty of fun to be had here as Mayne goes about his dastardly business in a sort of nastier hybrid of Vincent Price and Christopher Lee (who's also glimpsed briefly in a clip from Uncle Was a Vampire). The kills are often extravagant and wildly gory, ranging from a tongue tearing to a skull crushing to the undeniable highlight, a very splashy decapitation scene. It's also very well shot by Joel King (fresh off of Just Before Dawn), who wrings a lot of atmosphere out of what looks like limited means.

Now here's where things get a little confusing. This film was originally issued in theaters as The Horror Star by Manson International, who also 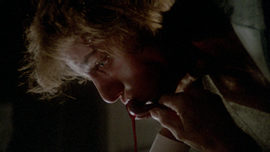 released Caged Fury the same year. The release barely made a ripple in theaters but found an appreciable audience on home video courtesy of a VHS from Vestron, who knew 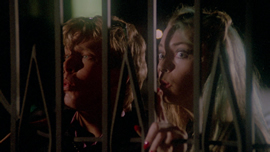 how to feed to appetite for horror on the small screen. That release used the alternate title of Frightmare, which was the name used in some other territories, which meant that Prism had to retitle Peter Walker's earlier film of the same time to Frightmare II, despite the fact that the two had absolutely nothing in common. Since then the Frightmare title has stuck with this one including its so-so DVD release from Troma in 2004 and a handful of really dire gray market bargain bin editions ripped from the old VHS tape.

Thankfully you can forget about all of those thanks to the dual-format Blu-ray and DVD 2015 release, prominently branded as an Exploitation.tv title with Vinegar Syndrome credited on the back sleeve (which is reversible and shows both titles and poster designs, ignoring the video one that pilfers the poster art for From Beyond the Grave). The new 2K scan from the original negative at Troma looks superb and bears the original The Horror Star title; film grain looks solid and tight with plenty of detail, easily outclassing any previous presentation of the film and restoring much of its visual effectiveness. Anyone who found this tough to slog through thanks to bad transfers should give it another shot, as the film is far, far more enjoyable now as a sort of slasher-friendly cousin to Madhouse and the horror actor segment from The House that Dripped Blood. The DTS-HD MA mono audio sounds very clear for the most part, with a little budget-related audio rumbling coming through in the original recording. 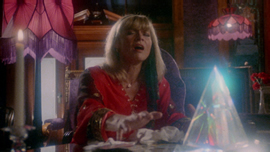 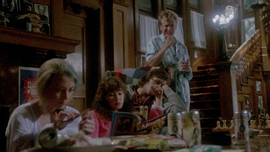 one gets no less than three audio commentaries: a new one with the gang at The Hysteria Continues (well, three out of four of 'em), an archival audio interview with late director Norman Thaddeus Vane (covering his entire career and recorded on what sounds like a tinny speaker phone), and a new commentary with David Del Valle and David DeCoteau, with the former sharing lots of stories about his friendship with Mayne and encounters with other famous horror personalities over the years. (The fact that Forry Ackerman gets a prominent credit at the end and supplied a lot of the horror memorabilia should have older horror fans chuckling throughout the film.) The chats are a fascinating study in contrasts as the first one focuses on the film's odd position between classic personality-driven horror and the '80s slasher craze, with the crew also offering a solid snapshot of the VHS culture of the era in both the US and UK. All are worth checking out, but be warned the Vane interview is best enjoyed in small doses since the sound quality will induce migraines over long periods of time. There's also a new "Man with a Camera" interview with cinematographer King (21 mins.), which focuses on the importance of lighting over composition, his early photography days on movie sets, his first movie assignments with Hal Needham and Steven Spielberg, and the shots he "stole" here from his tenure as a camera operator on Carrie. He also talks about the presence of cocaine as an incentive on the set, going into rehab with Dennis Hopper, and reveals that the original intention was the release the film in black and white with color inserts for the blood shots, so try watching the film with the color cranked all the way down on your monitor if you want an idea of how that might have looked. The closing credits will make your jaw drop, too. The package closes out with the theatrical trailer (as The Horror Star) and a gallery of poster art, video covers, and international lobby cards.