One of the greatest titles 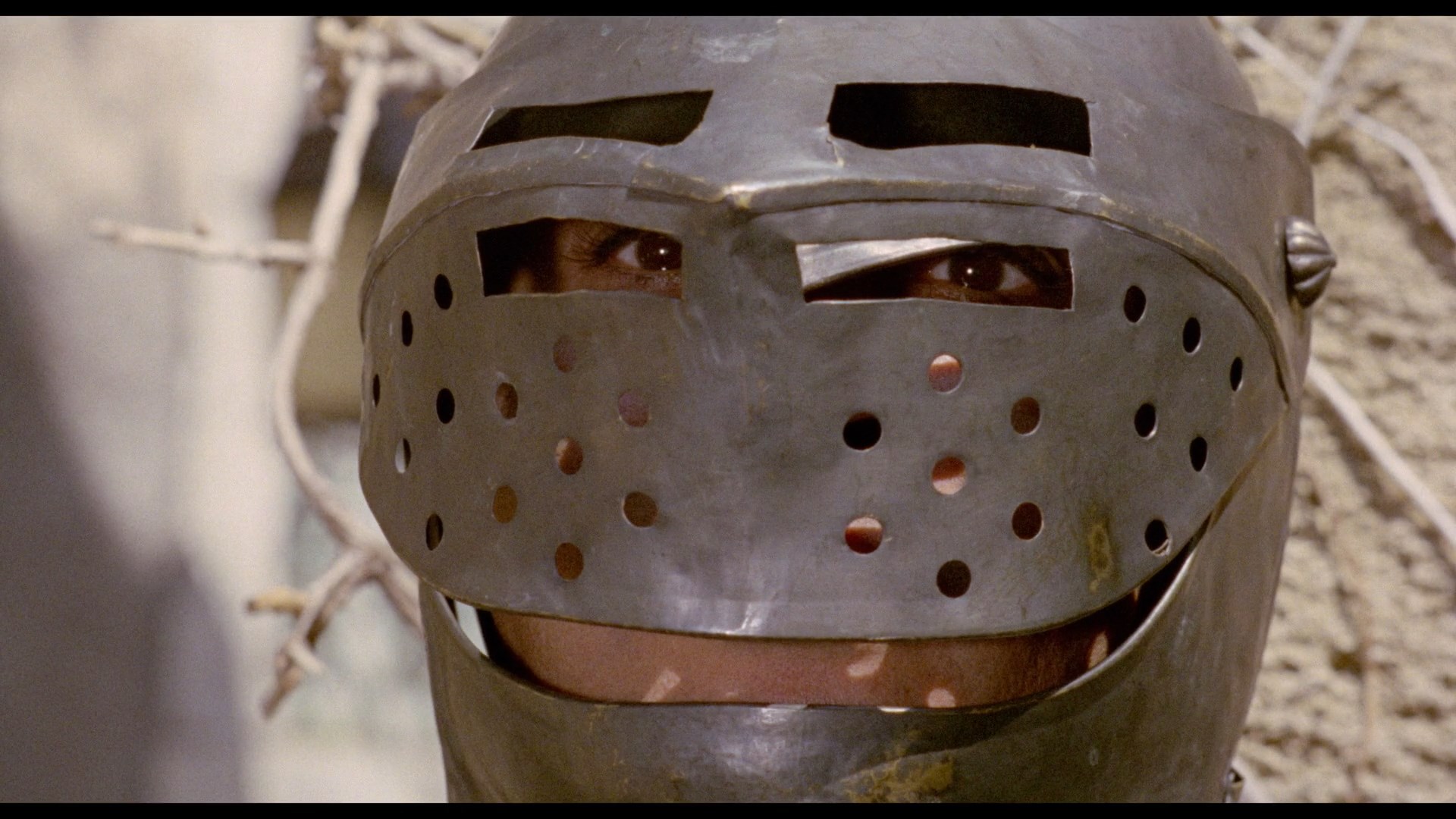 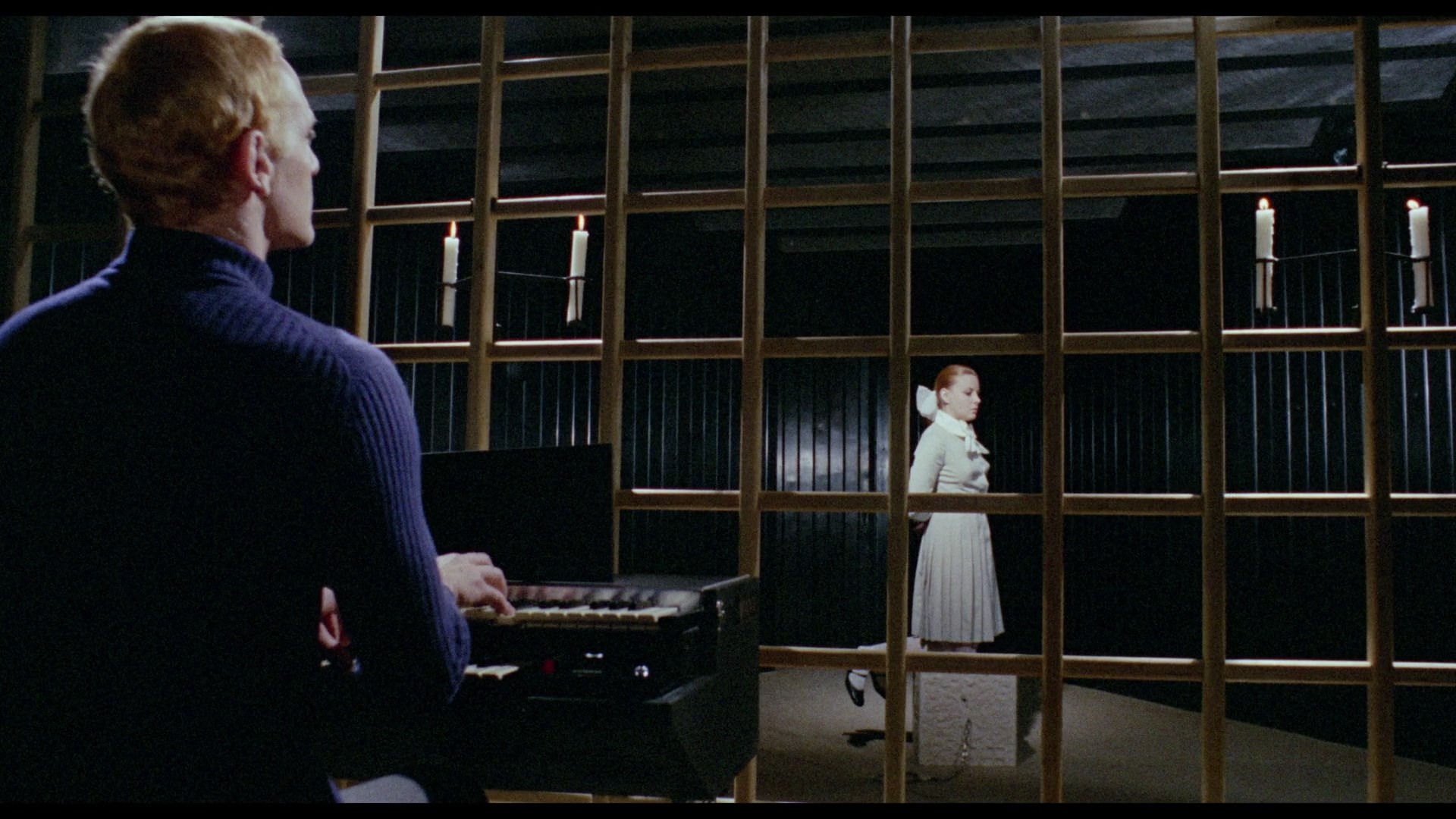 Femina Ridens and also shown as The Frightened Woman) is sort of a kinkier sibling to Camille 2000, with which it shares the amazing production designer Enrico Sabbatini. This eye-popping trip into a world of pop art, S&M, and gender warfare is one of the most sensually dazzling films of the late '60s; no wonder Metzger snapped it up and gave it a significant publicity push. Since then it's become a cult classic in Euro-cult circles, its reputation spread primarily through word of mouth among those attuned to its marvelous blend of the libido and pop art.

Following a cryptic opening in which a frizzy-haired secretary and a mysterious accomplice have a deadly encounter with a man in an eye patch, the story proper begins with the seemingly mild-mannered Dr. Sayer (The Wild Eye's Leroy) convincing the sweet, innocent, and beautiful Maria (The Forbidden Photos of Lady Above Suspicion's Lassander) to join him at his home despite their conflicting views on issues like male sterilization. Once there he initiates her into a series of exercises in bondage and discipline which consist of him spraying her down under a power hose, showing her a graphic slideshow while playing a tape of women screaming, and forcing her to cut her hair. Eventually Maria begins to become a more pliable partner in Sayer's game, and under her influence, he begins to fall in love. However, there's much more here than meets the eye.

Like most soft erotica from Europe during the period, The Frightened Woman is low on plot and only features a few teasing bits of nudity. What makes it so powerful and compulsively watchable (even on repeated viewings) is the impeccable command of both visuals and sound by the filmmakers, with each scene offering a new delight. 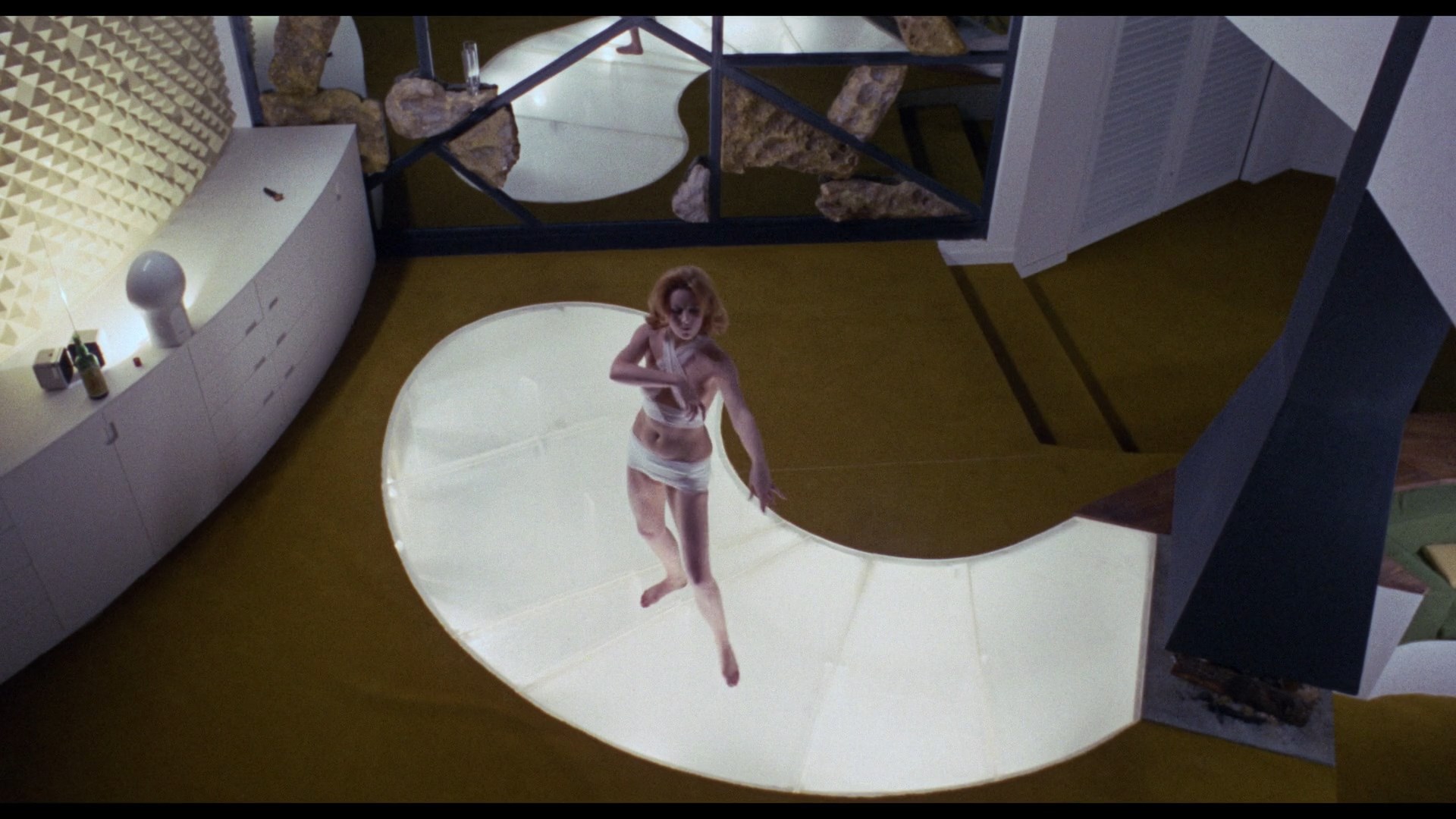 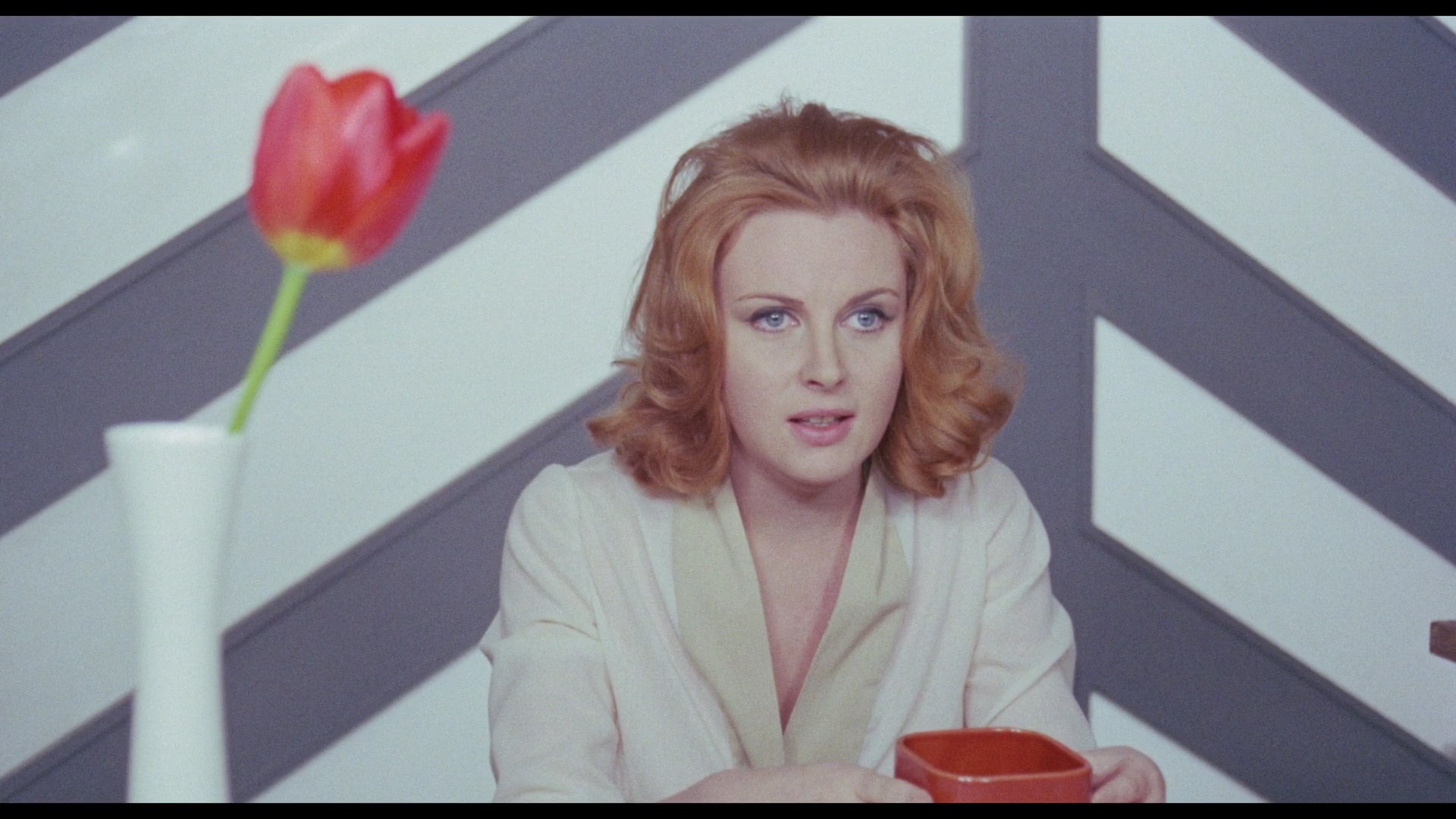 vagina dentata and returns as a skeleton during one memorable fantasy) or Lassander's scorching dance in the swanky pad while wearing an unraveling gauze dress, this film tweaks the viewer's imagination and continuously peels off one layer to reveal another surprise underneath. Lassander and Leroy play off each other well here, twisting viewer sympathies in a number of directions as their relationship twists and turns (including a weird specific similarity to Death Laid an Egg late in the game). Special kudos go out to composer Stelvio Cipriani, who adds to the film's spell with his brilliant, infernally catchy lounge score.

Rarely seen for years after its initial release, The Frightened Woman turned up on VHS from Audubon in 1995 in a disappointing transfer that slapped a fake 2.00:1 matte over the opening credits and squeezed the rest of the image for the duration of the film. On top of that, image quality was chalky, hazy, and virtually unwatchable. The same transfer was rehashed for First Run's VHS release in early 1999, which coincided with a British PAL edition from Redemption. Beautifully colorful and letterboxed, the Redemption version would seem definitive except for one fatal flaw-- both the slideshow and skeleton sequences were cut! For its DVD debut of The Laughing Woman, First Run at least got two out of three right- the print is uncut and correctly letterboxed. The framing is absolutely crucial to enjoying this film on every level, and it's nice to finally see it back the way it belongs. Unfortunately, while the image quality is definitely a couple of notches above the tape and looks crisp enough, the color is still distractingly muted, almost sepia during several scenes, and the print displays a lot of wear (with some 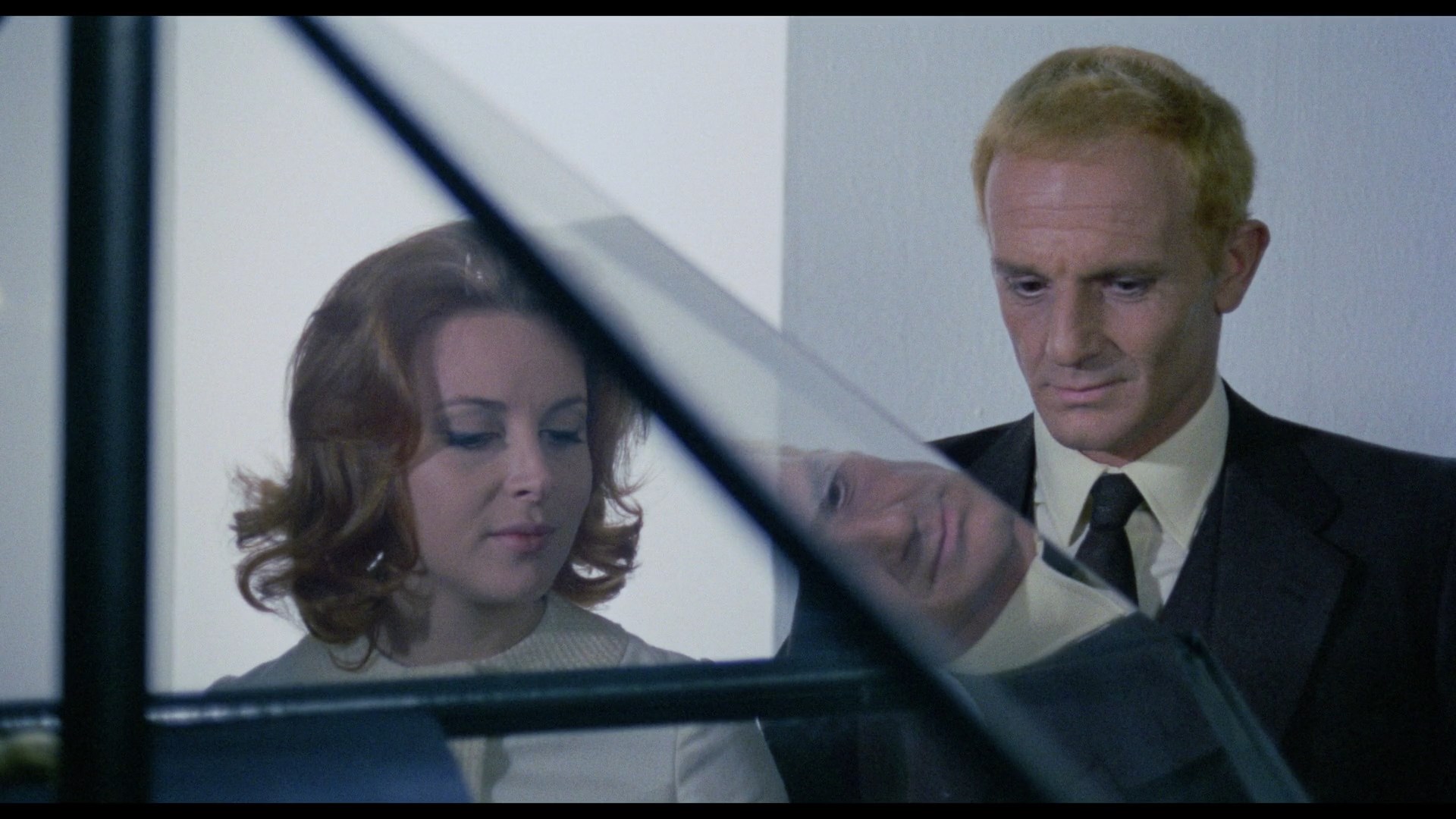 mysterious dropouts in evidence as well). The audio is adequate but very hissy in a few spots. That disc also includes 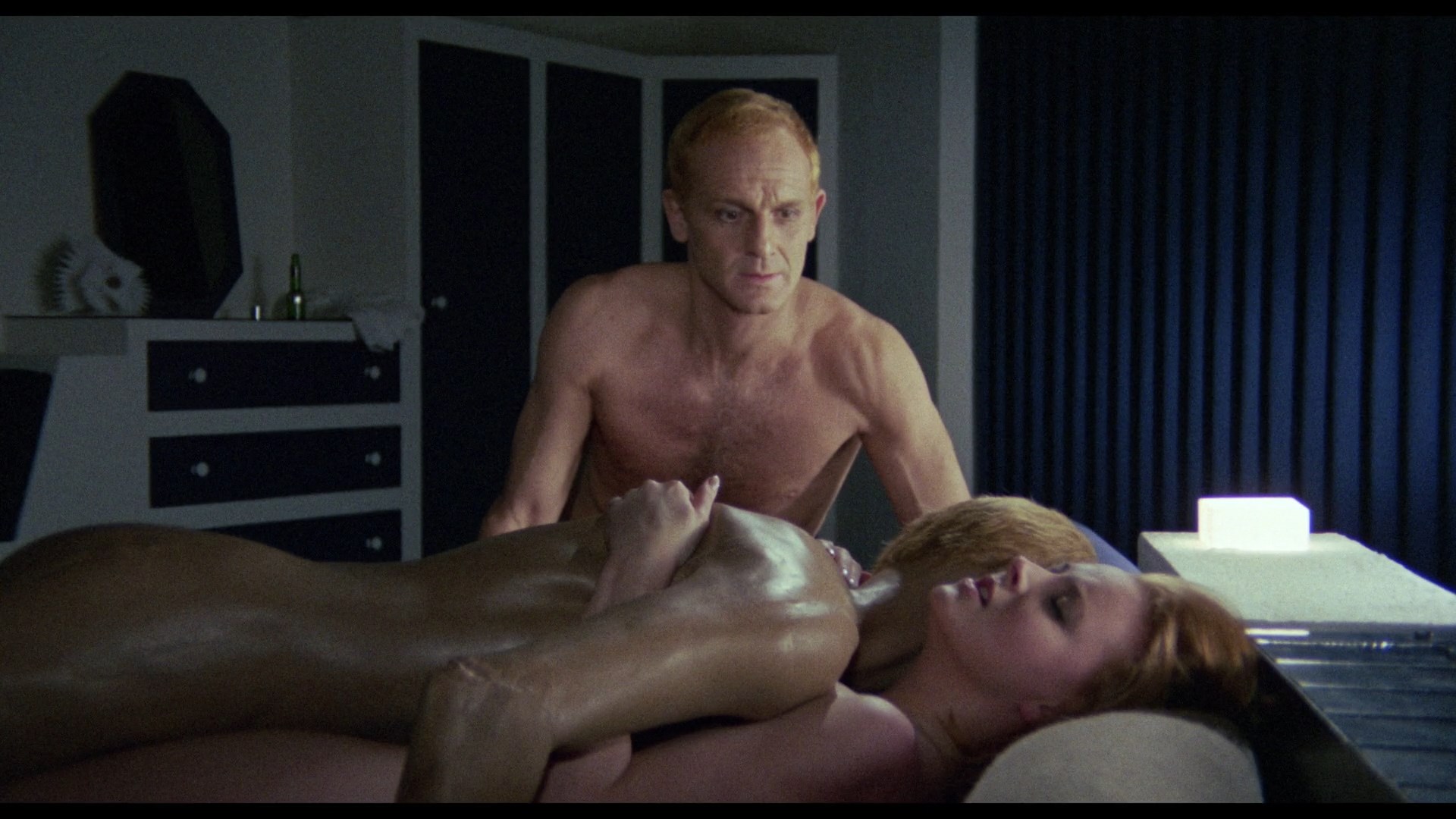 Coming much later in the UK was a vastly superior edition from Shameless, which follows the director's original script and notes to present the film in the longest possible version with considerably more impressive image quality. The bulk of the transfer is vibrantly colorful, though a handful of extended alternate shots from the U.S. version have been edited in from the same flawed master. The only real debit is the "trailer" included, which is a newly-created digital job that doesn't work remotely as well as the original one. Another DVD from Koch Media in Germany is a more elaborate edition featuring a superior scan from an intact film element (in Italian or English with German subtitles), with extras including a "Director Ridens" (33m42s) interview with Schivazappa (in Italian with German subs), a reel of alternate scenes (3m46s), the U.S. trailer, and an image gallery.

In 2022, Mondo Macabro released the film on Blu-ray to retail for the first time (following a direct sale 1,500-unit limited red case edition with a liner notes insert by Roberto Curti) featuring a new 4K scan from the original negative. As expected it's a visible improvement over its predecessors with more image in the frame (either at the top or bottom depending on the reel), stronger detail, and what is presumably more accurate color timing pulling back on the yellow tinge seen earlier. The English and Italian tracks are both presented here in DTS-HD MA 2.0 mono options with optional English subtitles; the English track is still preferable as it matches the 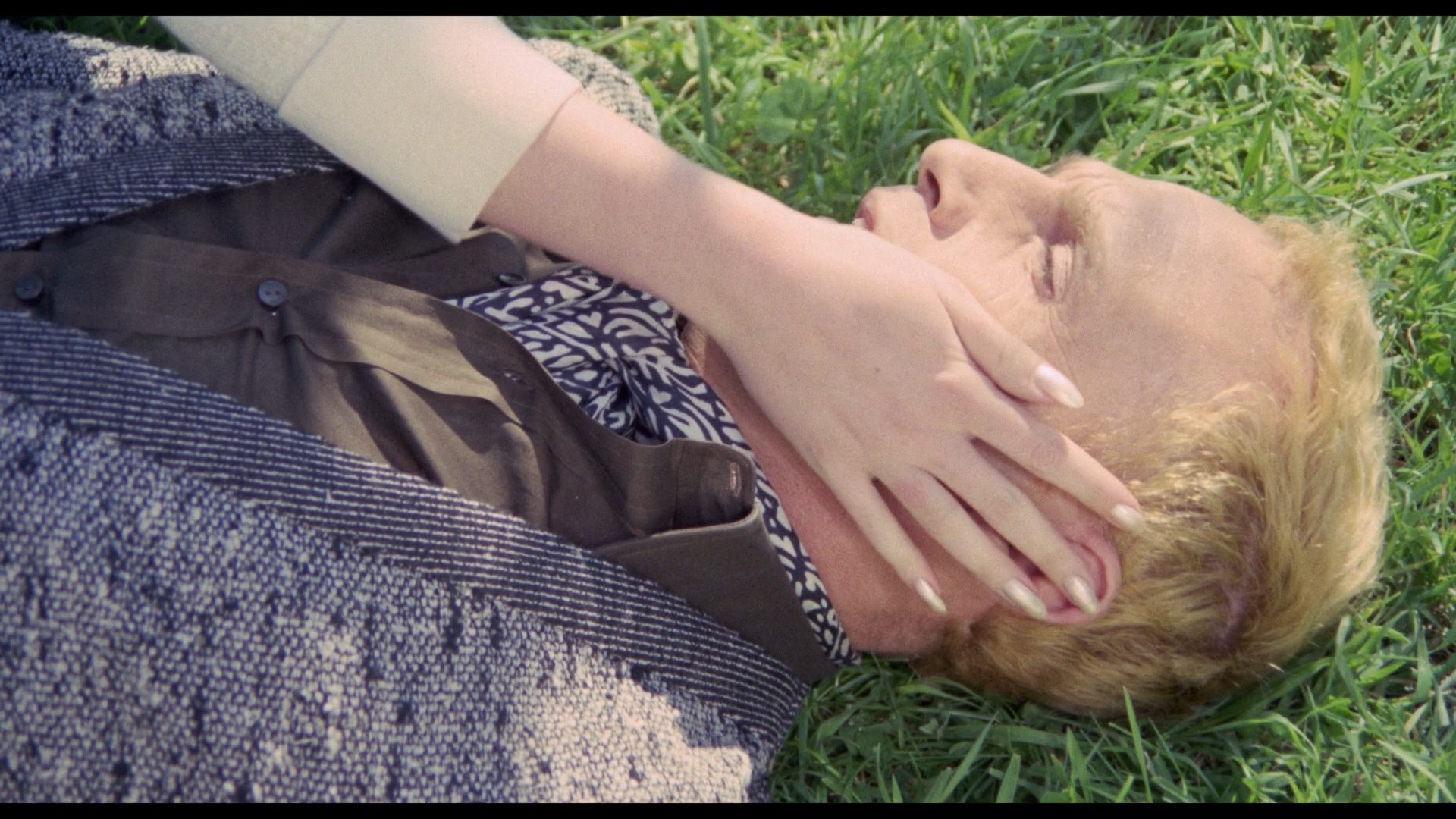 performances (which were dubbed either way in the end per usual practice), though the Italian one has some interesting mixing 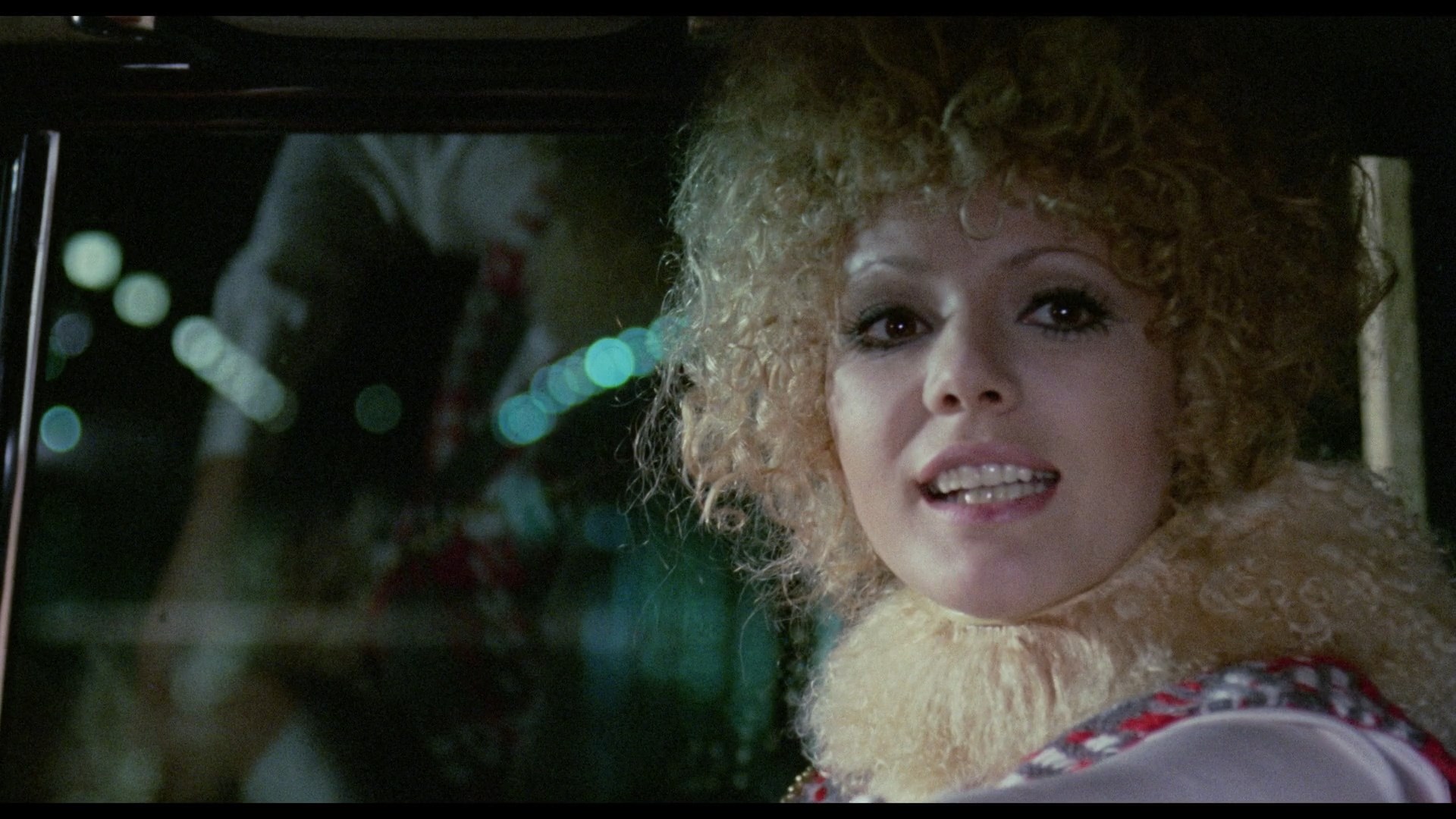 differences that make it worth a listen. Kat Ellinger provides a new audio commentary, and this is obviously one very suited to her interests in sadean cinema and gender-based cinematic movements as she chats about Audubon, genre classification, the benefits of approaching it as a comedy, a parallel to American Psycho, and the issues with slotting certain depictions under the umbrella of the male gaze. A new, different Schivazappa interview, "Marquis De Sade Vs. Praying Mantis" (32m51s), goes into the crafting of the story and screenplay, the similarities to The Collector, his various collaborators, the story behind that amazing sculpture, the decision to avoid a specific locale, his thoughts on the soundtrack, the selection of the exterior locales and interior design, and the reception in Italy. The video essay "Production Design in The Laughing Woman" (24m57s) by Rachael Nisbet is an incisive look at the stylized sensibility that marked late '60s Italian cinema with other media seeping into the aesthetics of sci-fi, horror, and erotic productions. Of course the production design is virtually a third major character in this film, and she dives deep in the various components here after touching on prior keystones like The 10th Victim and Planet of the Vampires whose production designers were largely responsible for their visual impact. Also included are an animated French fotonovel (2m56s), the familiar classic English trailer, and the surprisingly inferior Italian trailer. 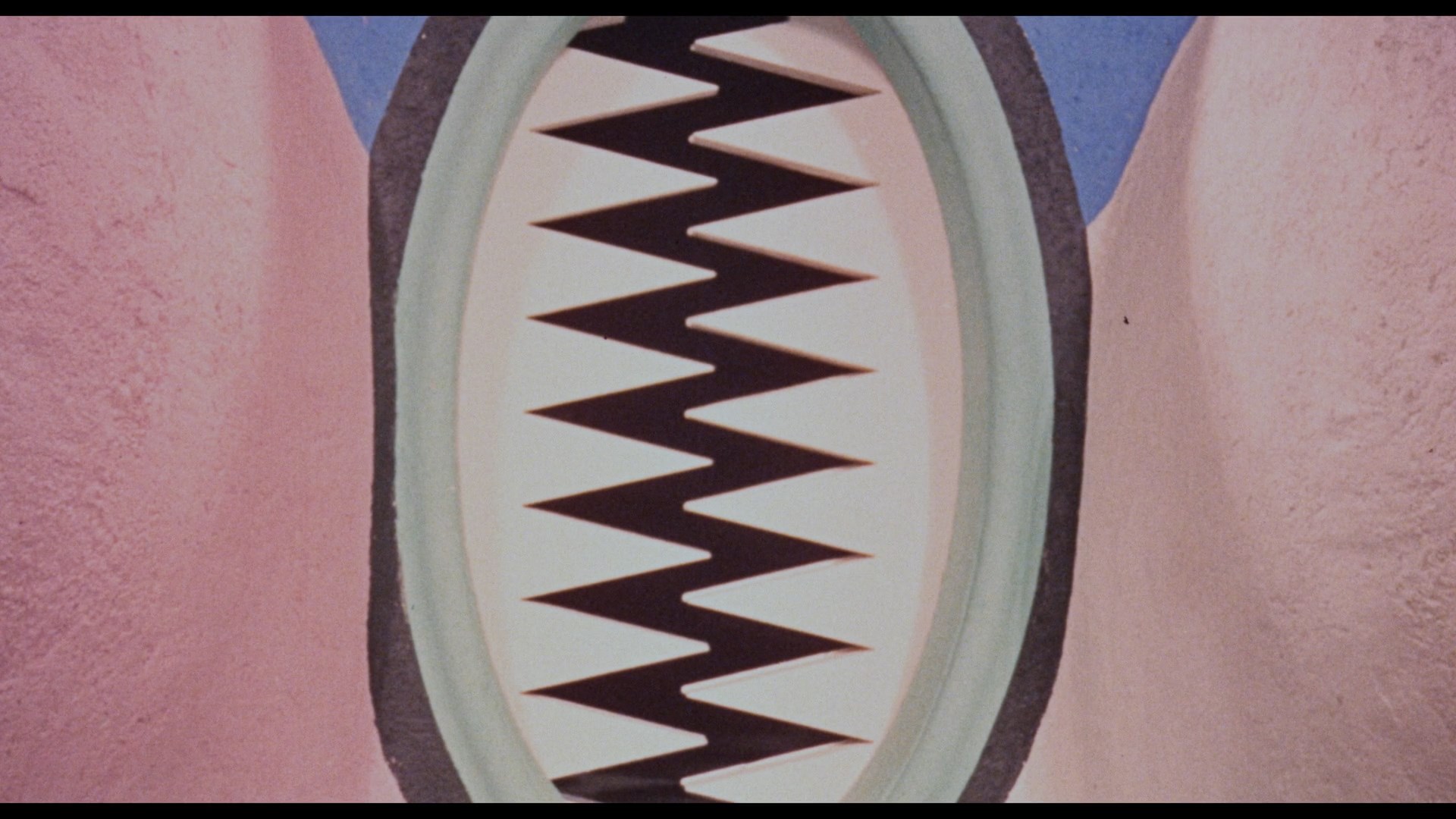 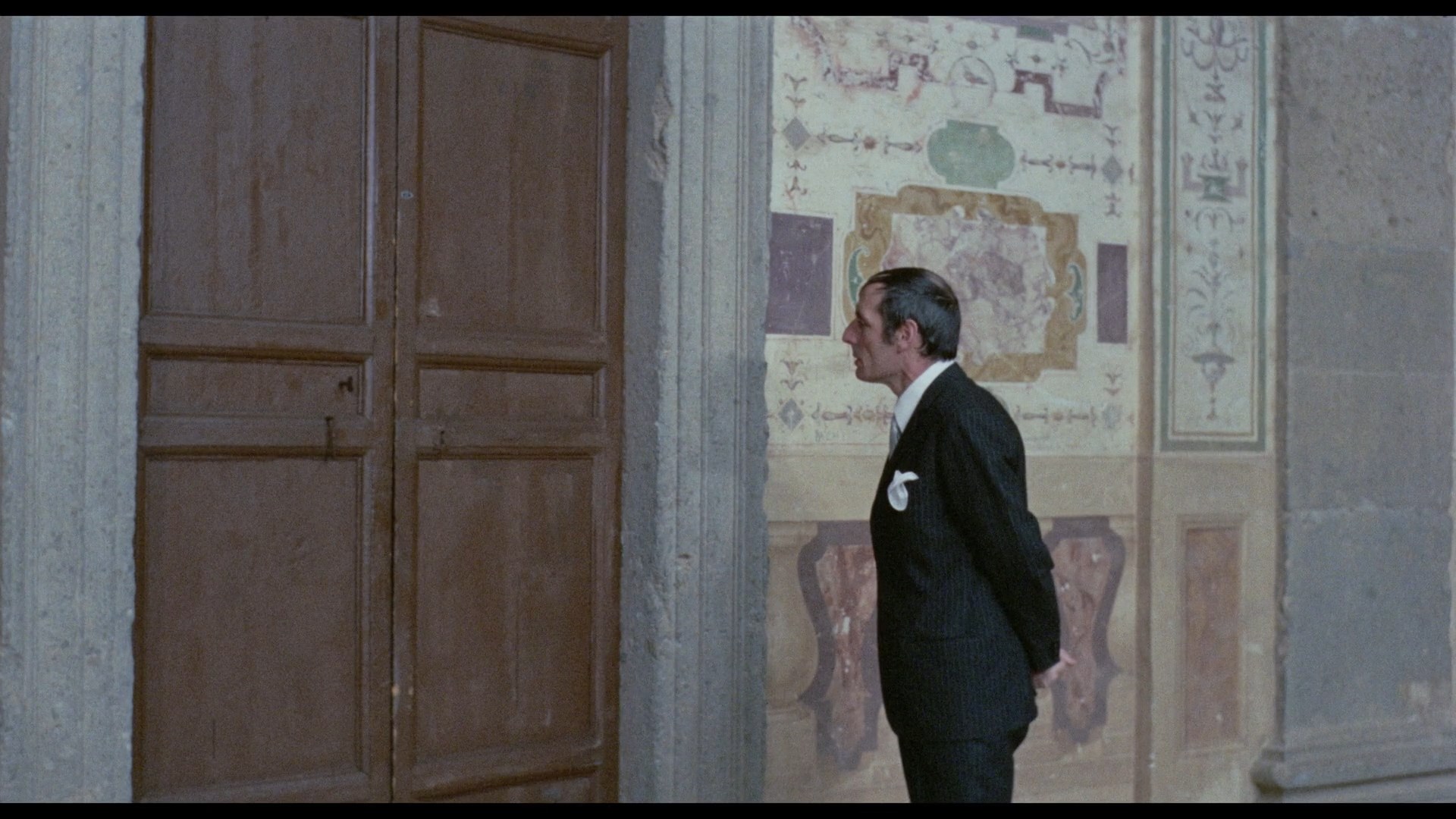 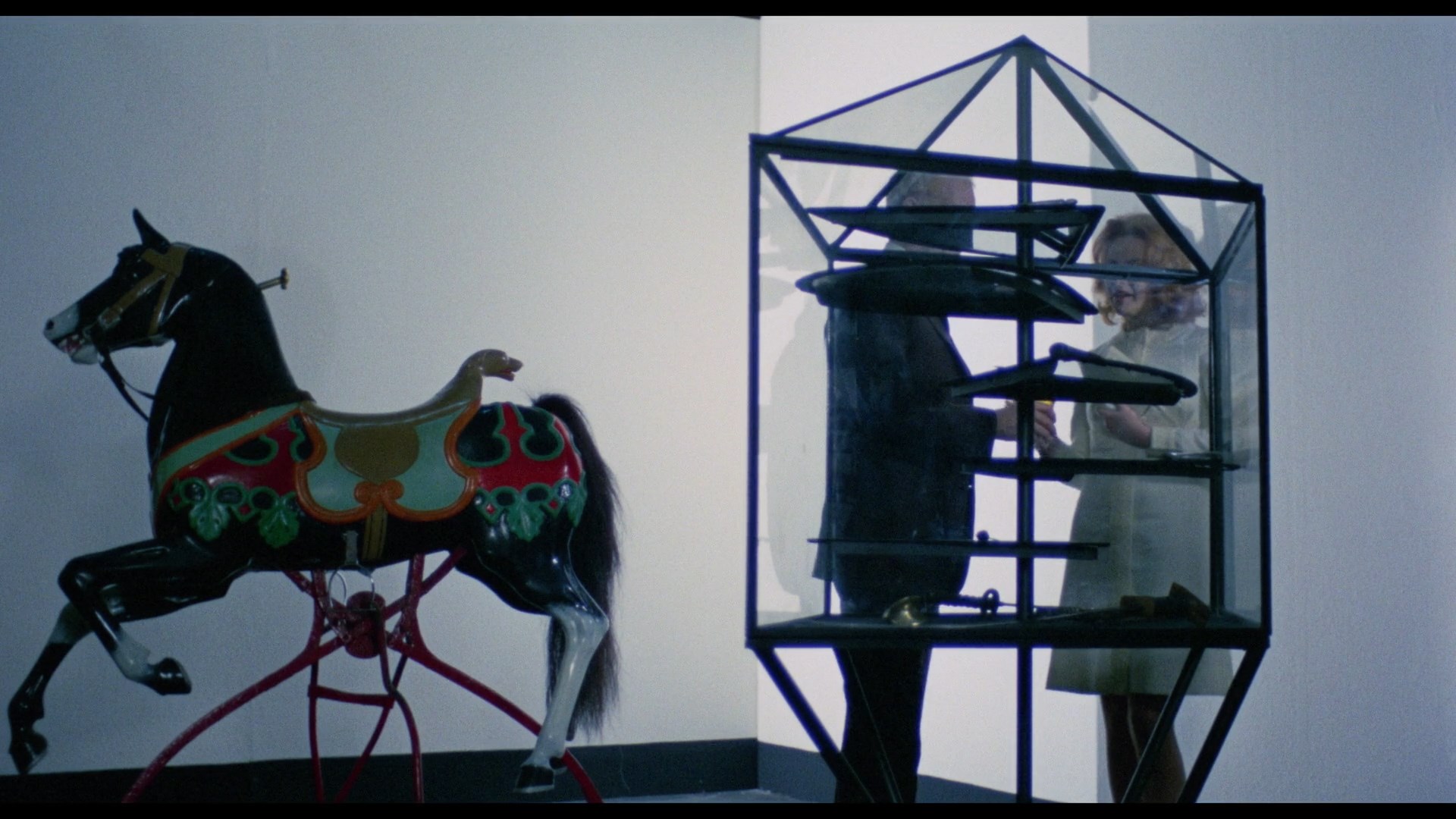 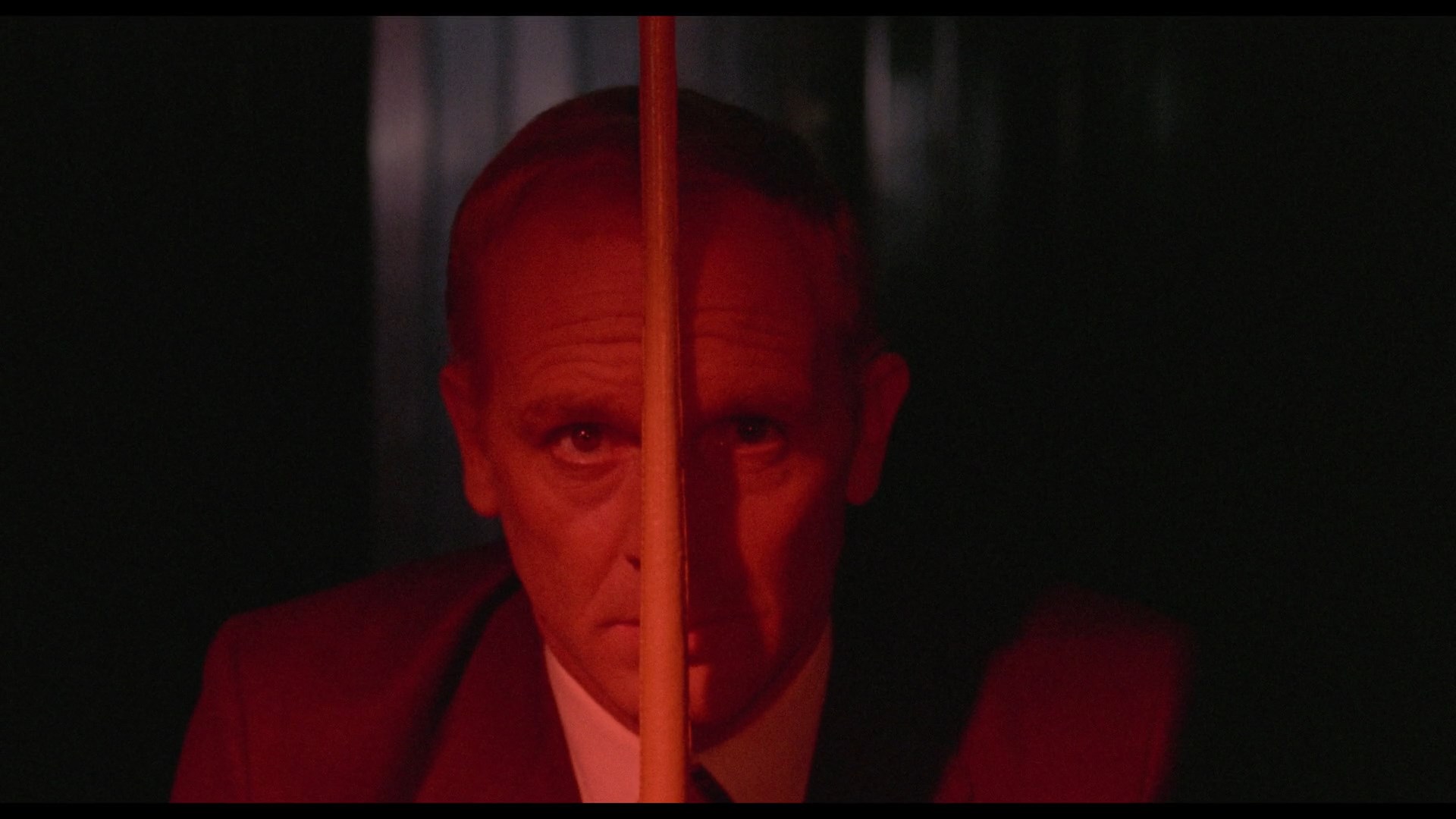 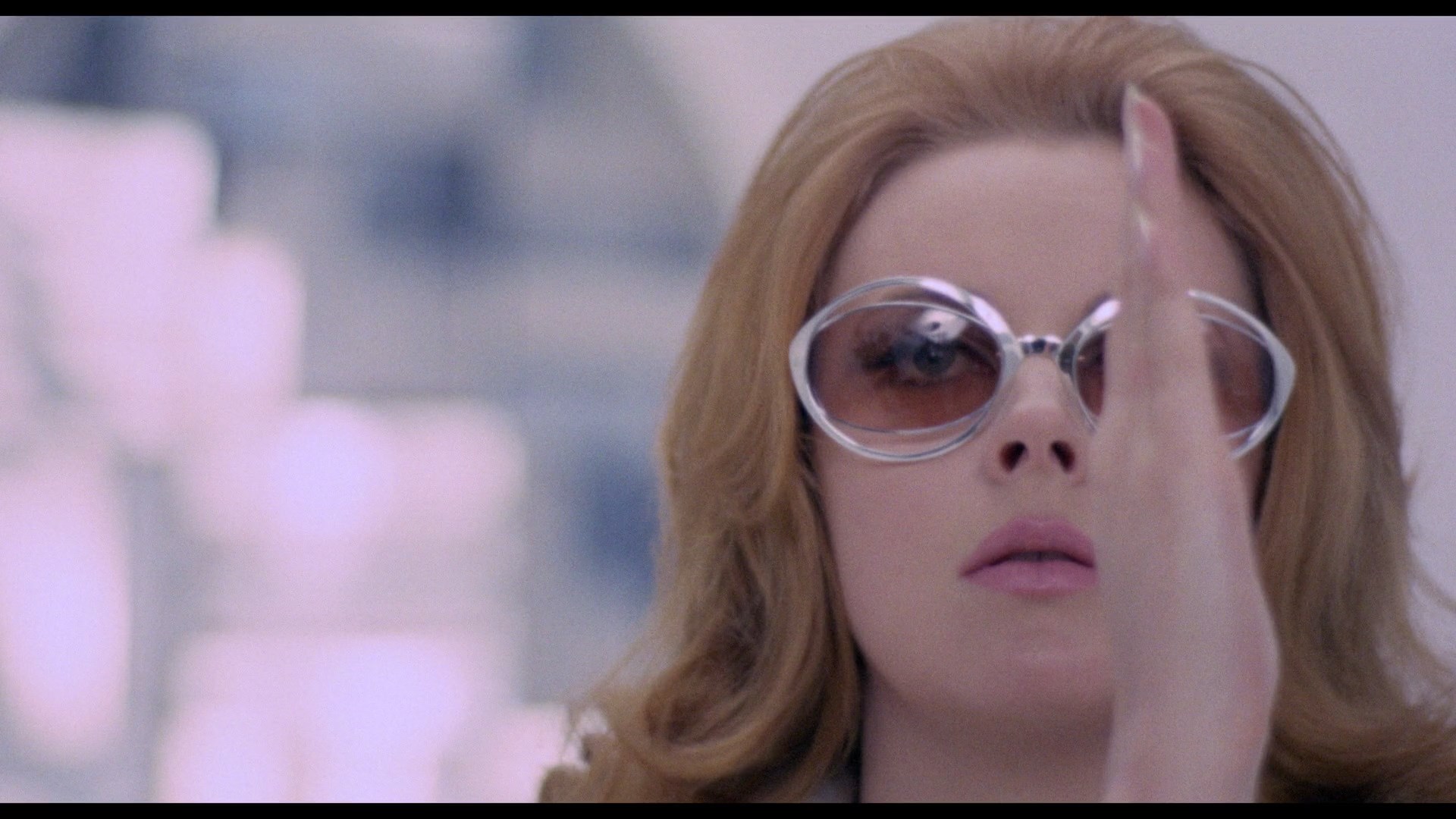 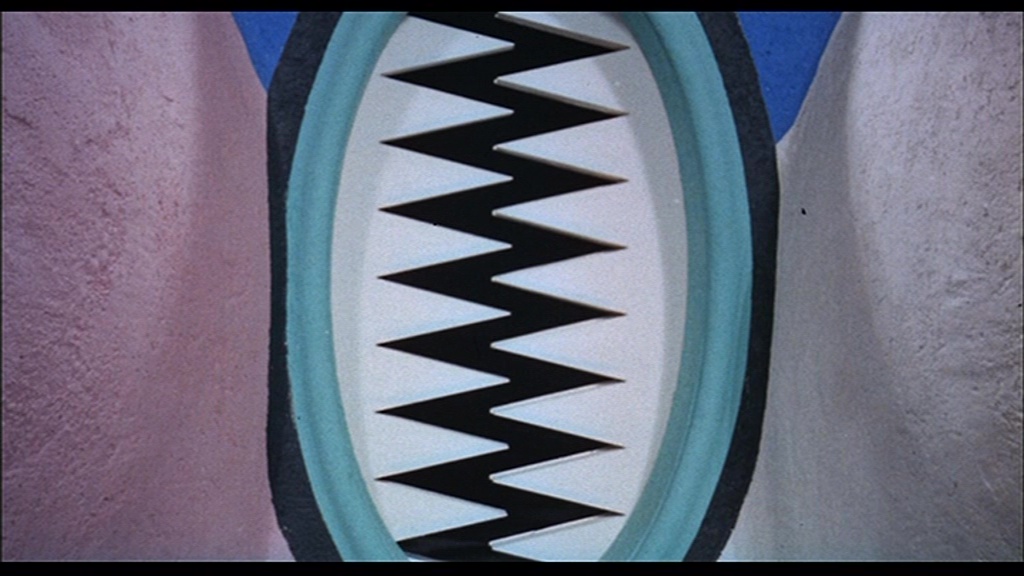 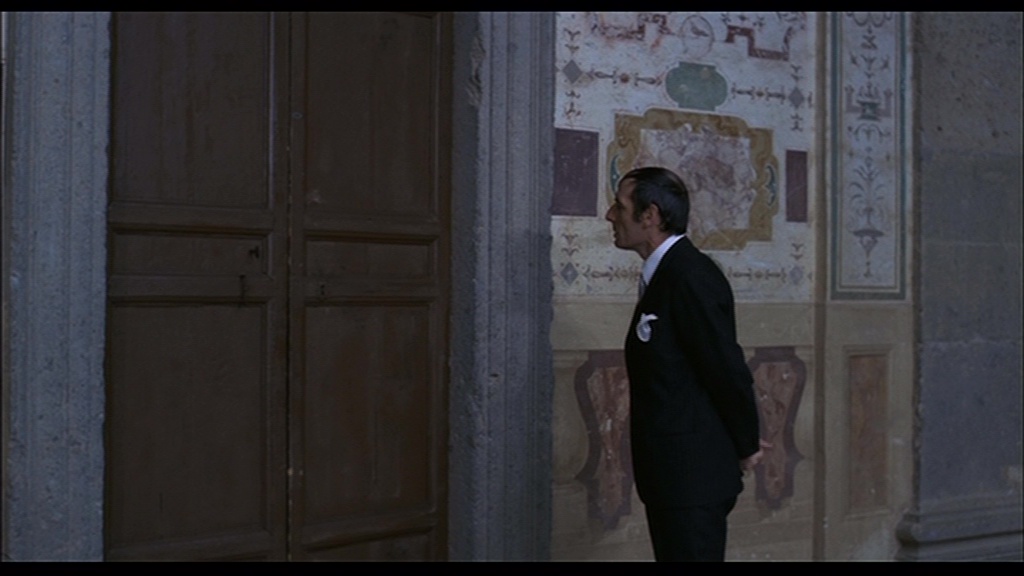 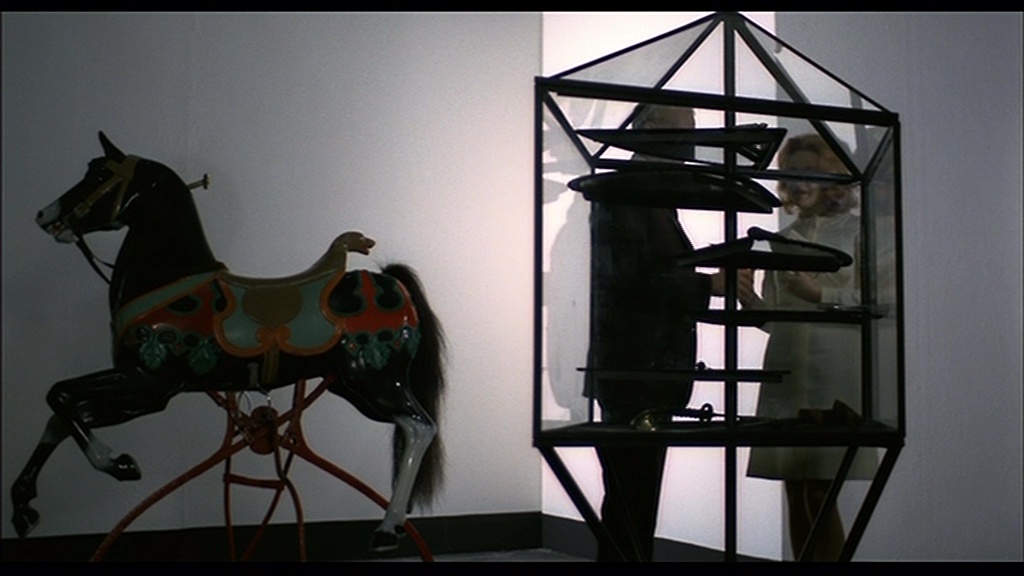 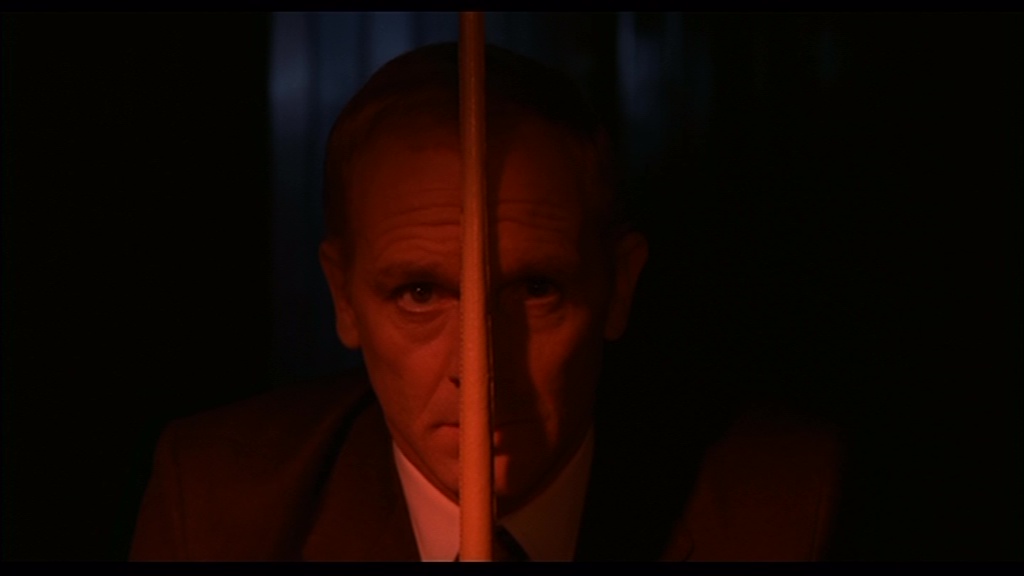 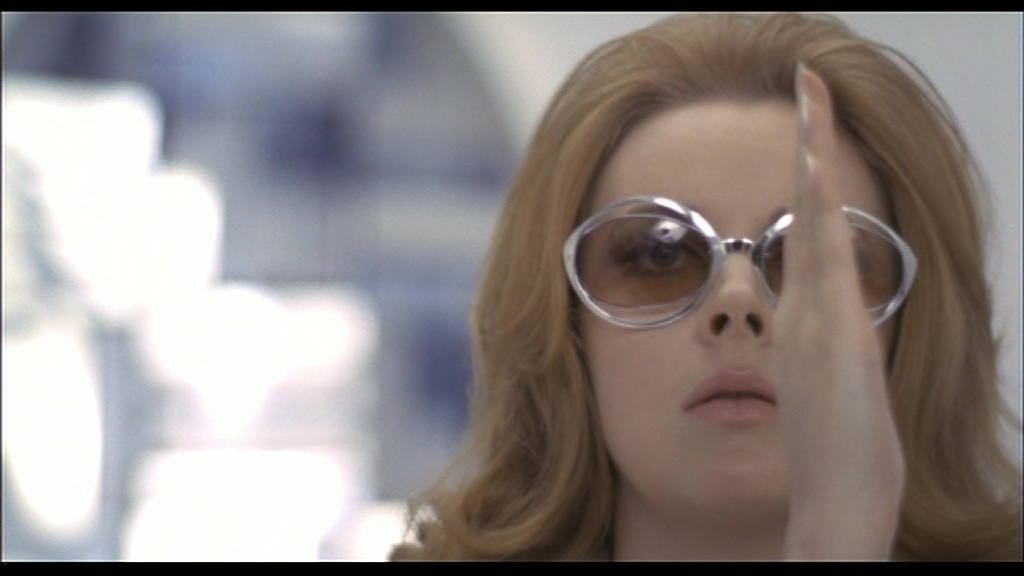 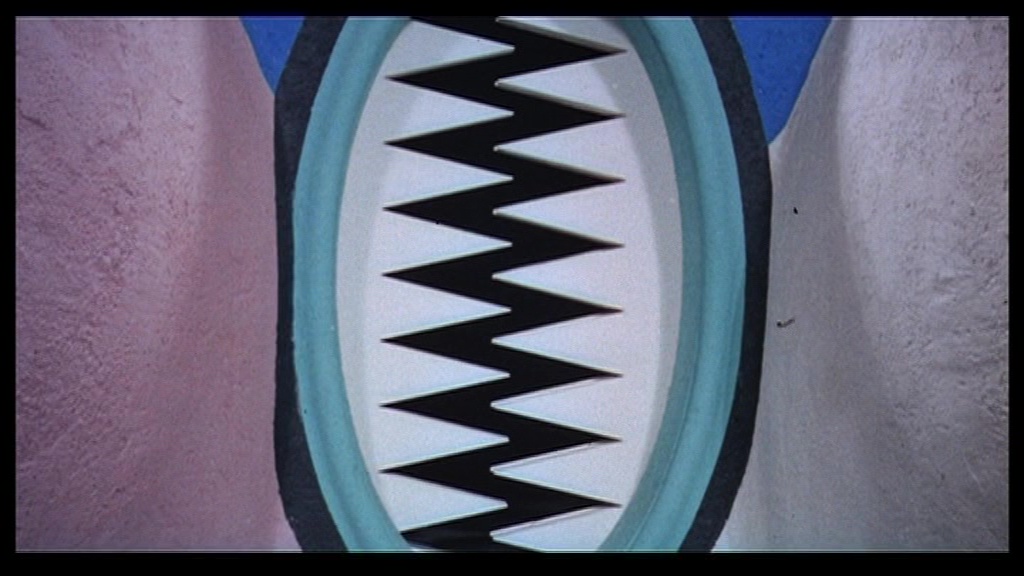 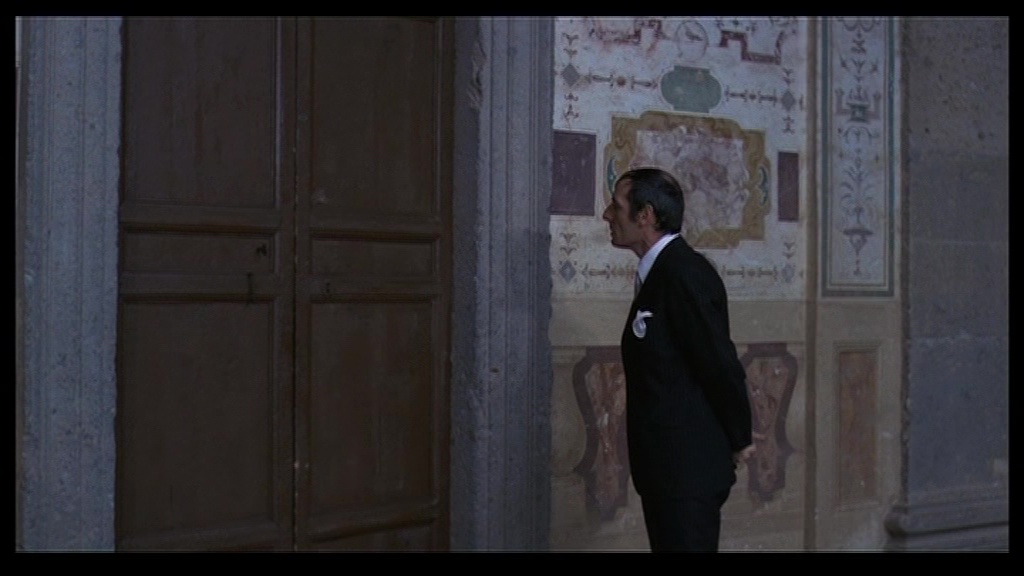 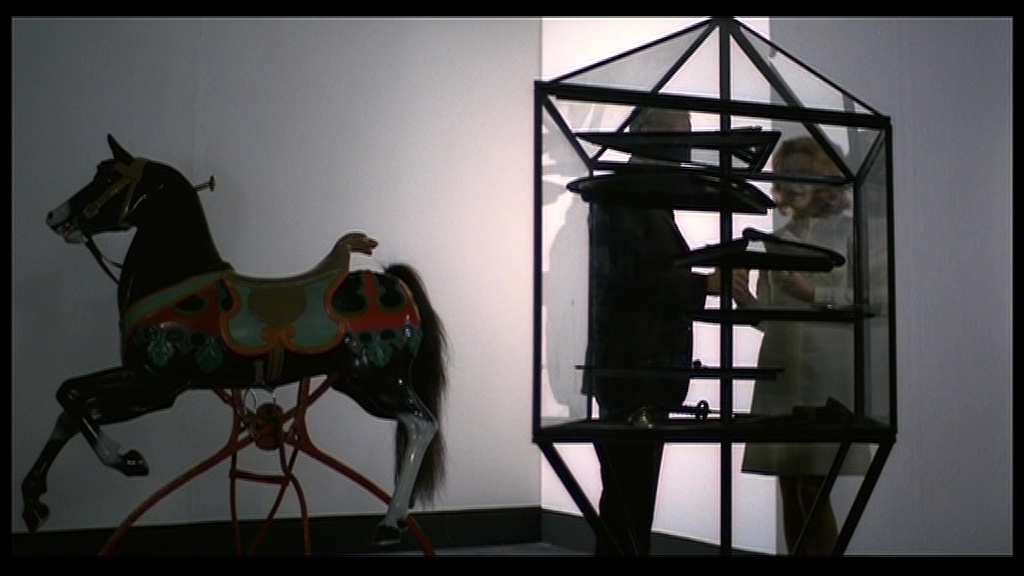 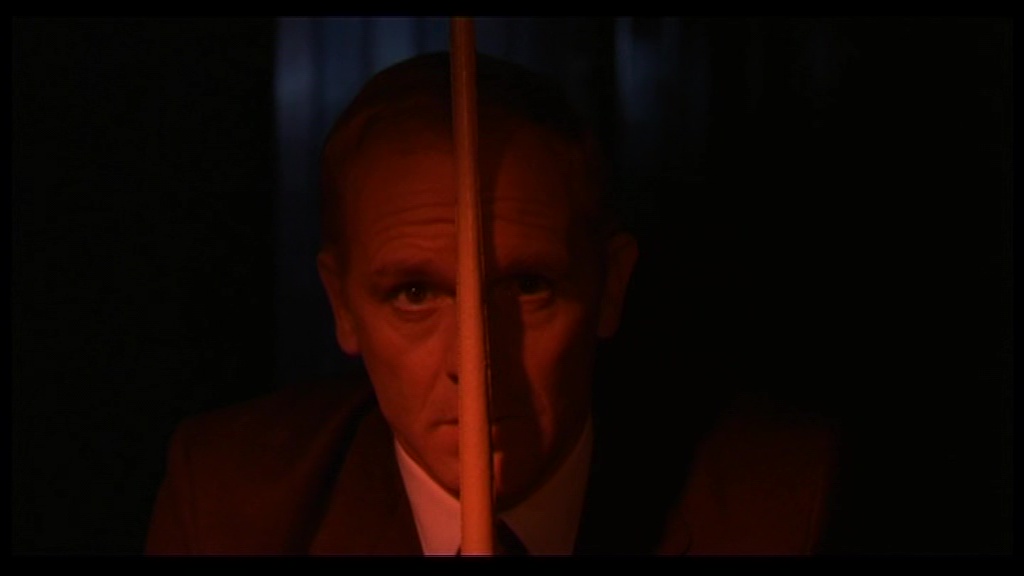 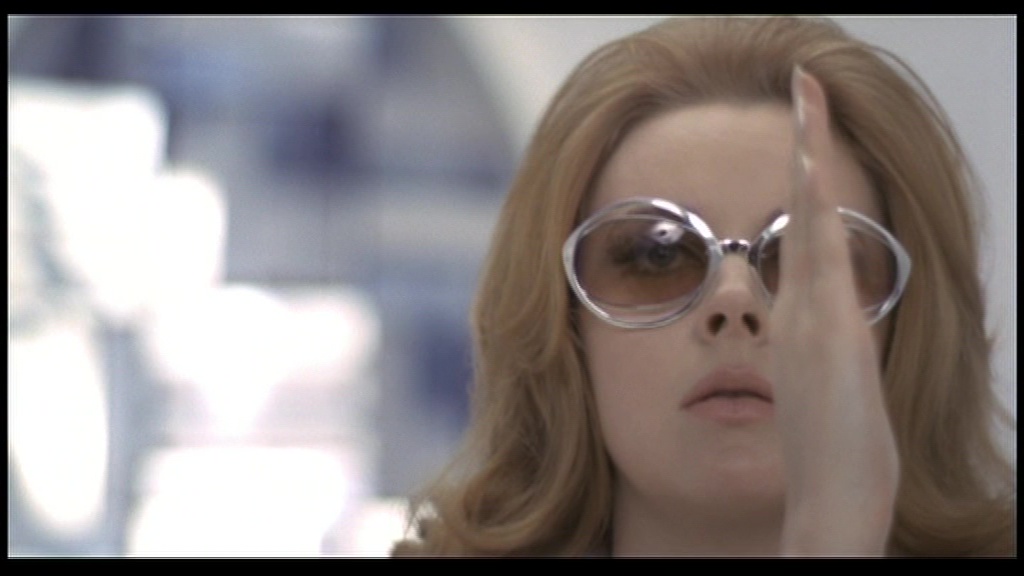