One of the most infamous cinematic atrocities committed upon moviegoers in the 1960s, Frankenstein Meets the Space Monster manages to roll together all the most jaw-dropping aspects of Plan 9 from Outer Space, Beast of Yucca Flats, and any 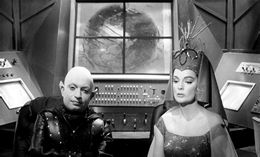 other bargain-basement '50s sci-fi opus you can think of, then wedges in enough stock footage to drag the storyline kicking and screaming out to full feature length. Good it ain't, but you'll never see anything else like it.

Though NASA has been experiencing a number of inexplicable problems with their rocket launches lately, who could have expected that the mayhem was being intentionally caused by a pair of mischievous Martians, Dr. Nadir (TV regular Cutell) and Princess Marcuzan (The Brain that Wouldn't Die's Hanold)? And who could possibly guess that these Martians are in fact planning to abduct plenty of sexy Earth women to replenish the Martian gene pool? Certainly not resourceful but cold-natured scientist Dr. Adam Steele (Karen), who, along with his whiny assisant Karen (Marshall), has devised a plot to send the cybernetically-enhanced 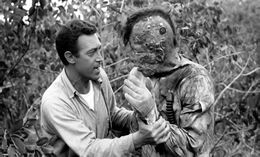 Captain Frank Saunders (Reilly) into space as a means of preventing future human casualties. When the Martians strike again, poor Frank is left with his face half-burned, stumbling around the wilds of Puerto Rico in a homicidal daze and looking to fight another monster. Fortunately the Martians have their own beast kept in the wings, just waiting to unleash it for the grand finale that will determine the future of Earth.

Shot and edited unlike any other drive-in cheapie, Space Monster doesn't display much technical proficiency in the traditional sense; however, the stark monochromatic photography and some truly odd montages (such as a batch of random NASA test footage backed by some very catchy rock music from the Poets) manage to make this of more than passing interest for strange-cinema addicts. Horror fans will also get a kick out of seeing a very young and svelte Karen, decades before his memorably uptight turns in Poltergeist and the first two Return of the Living Dead films. Oh, and look hard for Bruce Glover (father of Crispin and one of mainstream cinema's 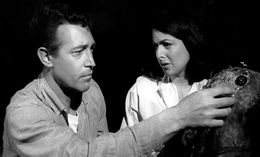 first homicidal homosexuals, Mr. Wint, in Diamonds Are Forever) as both a Martian crewmember in pointy ears and reportedly underneath lots of matted fur as the space monster itself.

A familiar oddity to late-night TV viewers, Frankestein Meets the Space Monster never looked so great on home video, but Dark Sky's DVD comes about as close to pristine as you can get, given the source material. The original 35mm footage looks great, with excellent detail and satisfying widescreen framing (which mattes off a lot of empty dead space from the full frame version available elsewhere). The stock footage (which probably makes up over half an hour of the film) still looks ragged and inconsistent, of course, but that's to be expected. Extras include the bewildering theatrical trailer, a still gallery, optional English subtitles, and an interesting 14-page booklet which contains a grab bag of various interviews, anecdotes, and pertinent reviews about the film, revealing its genesis as a straight-up comedy script, its odd financial and distribution history (losing out to a bigger deal for The Horror of Party Beach and Curse of the Living Corpse, which share this film's executive producer, Alan V. Iselin), and the one-shot director's thoughts about his labor of love.