FOR YOUR HEIGHT ONLY

CHALLENGE OF THE TIGER 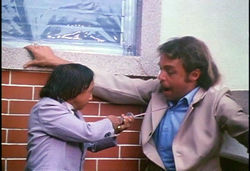 offer an unforgettable evening of party viewing. First up is For Your Height Only (or as the title card calls it, For Y'ur Height Only), the first of two Filipino spy adventures starring the diminutive Weng Weng. (The second film, The Impossible Kid, is available as a bargain title on DVD as well.) It seems the nefarious Mr. Giant and his goons are terrorizing the country with slavery rings, drugs, and gunrunning, and now Weng Weng is hot on their trail after the kidnapping of a respected scientist who's pioneered a new kind of bomb. Equipped with an array of low-tech gadgets and peculiar prowess with the ladies, he canoodles and kickboxes his way into Mr. Giant's hideout where justice can be preserved with a few well-placed 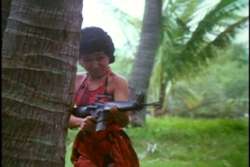 kicks to the crotch. A few innocent people die along the way, but such is the price of freedom -- especially when it's being guarded by someone less than three feet tall.

Packed with memorable one-liners ("What's the matter, you got a bug in your hair?"), horrifying fashion, and a warbling music score, For Your Height Only resembles no other James Bond imitation on the planet. Weng Weng never changes expressions (except for one chilling attempt at a smile), evidently taking his leading man duties very seriously as he darts around his enemies and administers deadly force from a very low altitude. The film looks like it was shot for a few dollars in one neighborhood, but the comedic value is so high, even the most demanding of viewers won't care. The exact comic nature of the film in its origins is questionable as most of the silliness appears to have been imposed during the dubbing process; however, whatever

cinematic forces joined together to produce this bizarre masterwork deserve to be praised for years to come.

Due to a lack of available film elements, Mondo Macabro's DVD must resort to the same tape master used for the dire Simitar release a few years earlier. However, this version improves tremendously in the encoding department over that previous pixellation-riddled mess, making for a somewhat ragged but acceptable viewing experience. The film appears to be presented completely open matte with nothing missing on the sides; a handy zoom-in on a 16:9 television closely replicates the film's intended theatrical framing quite nicely.

doesn't skimp on the thrills, either, as martial arts also-ran Bruce Le does double duty as director and star of Challenge of the Tiger). When a villainous organization devises a plan to render the world's population sterile and wipe out the population (just like the Roger Moore Bond movies around the same time), CIA agent Huang Lung (Le) must team up with co-agent Richard Cannon (Harrison) to stop the madness. Of course, they accomplish this by beating up and/or seducing everything in sight, all with barely a single thread of a plot to hold the nonsense together. Totally irrational and packed with excessive nudity and violence, this is kung fu fun of the highest order.

Unlike the first feature, Challenge of the Tiger benefits from a fresh new widescreen transfer in glorious scope. The result is simply glorious, a panamoramic feast of the bizarre that captures every kick and bikini string in perfect detail. The dubbing also sounds crisp and clear, for what that's worth.

Extras here are fairly light and text-oriented (aside from the usual Mondo Macabro promo): still galleries for both films, a typically informative Pete Tombs essay about Weng Weng and Dick Randall, a much jokier but fun essay by reviewer Ian Jane, a lengthy Bruce Le bio by Tombs, and a Richard Harrison overview by Julian Granger. For some reason the text goodies here are punctuated by an incredible number of typos, though that's strangely in keeping with the nature of the films themselves.