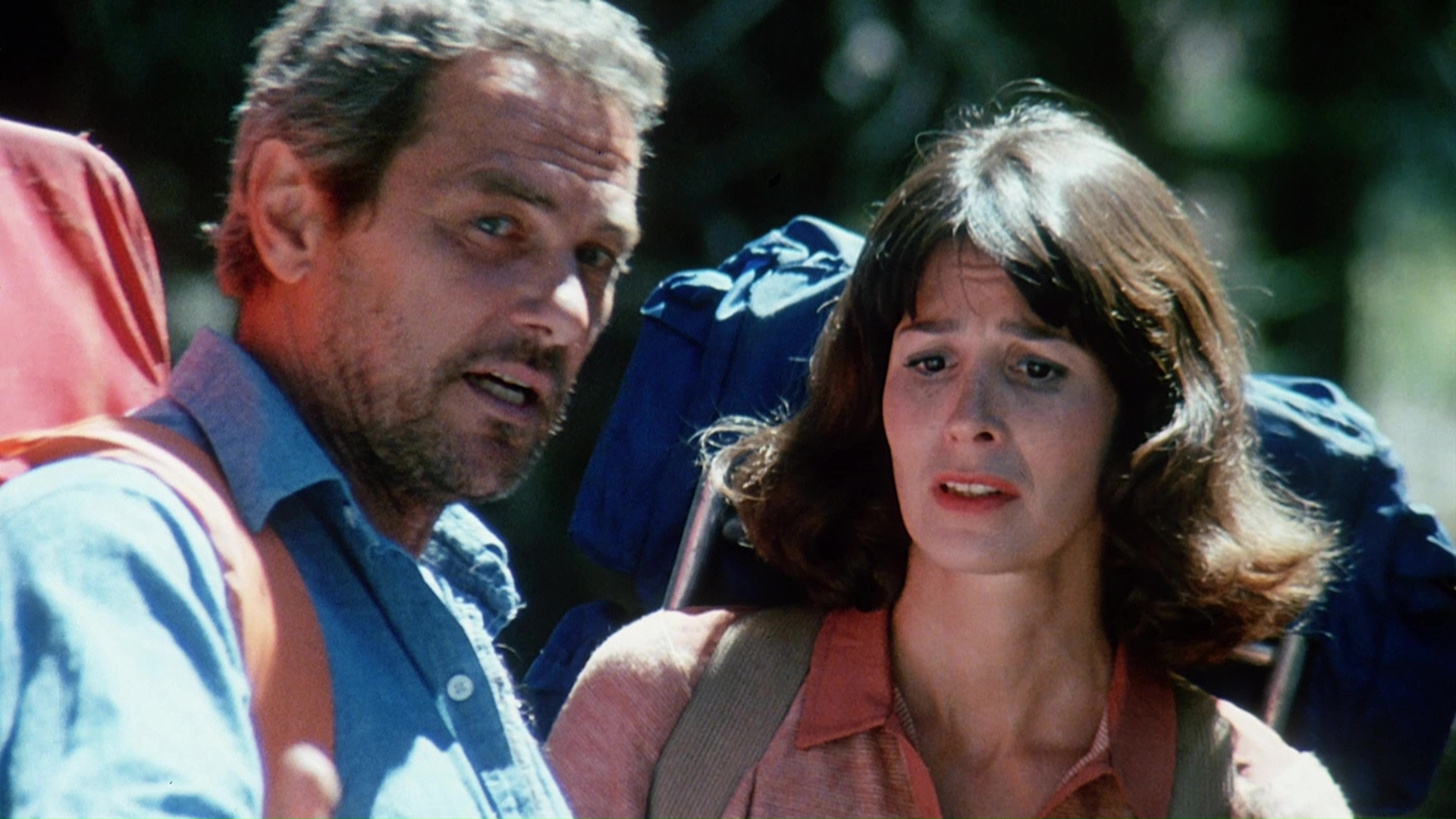 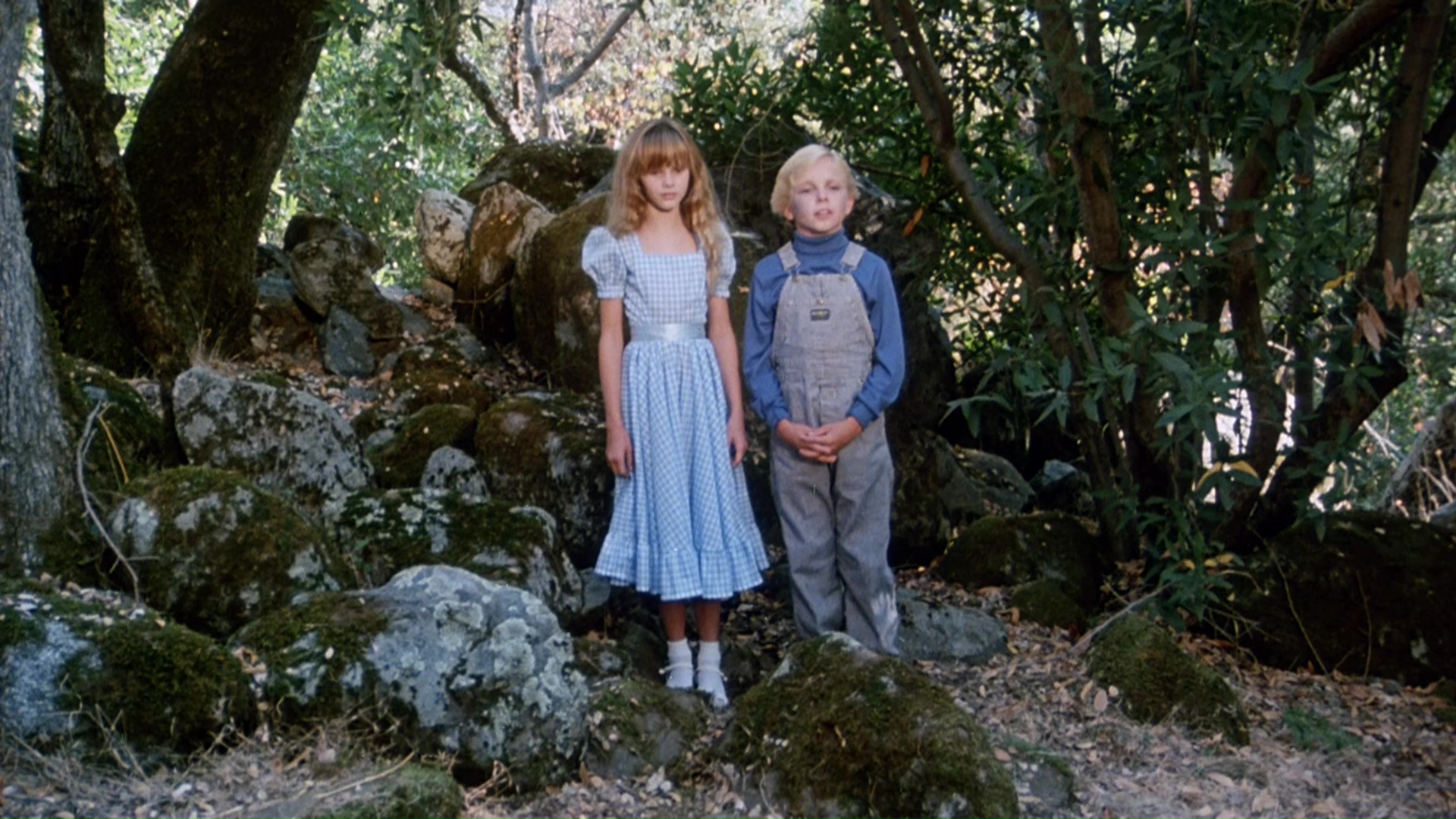 One of numerous forest-oriented horror films churned out on home video to capitalize on the slasher craze (see also: Don't Go in the Woods and The Final Terror, among others), The Forest manages to carve the story down to its bare basics while offering a few novel twists along the way to make it worth a look. In a hook similar to Lucio Fulci's House by the Cemetery of the same year, two ghostly children haunt the woods where their still-living father, a cannibal lunatic (Kent) who killed his family, still lives in seclusion and offering suspicious sweetmeats to any passing campers who don't immediately fall victim to his hefty blade. Rather than delivering the expected splashy gore and T&A, the film instead takes its time, first with a prologue in which a young couple gets bumped off in the middle of nowhere, and then with the plot proper as two husbands, Steve (Russell) and Charlie (Batis), and their wives, Sharon (Warner) and Teddie (Wilkinson), rendezvous in the same spot (but nobody seems too interested in their spouses, giving this film some peculiar subtext) only to encounter both the maniac and his ghost kids. Much running through the dark woods ensues, and the killer's ghostly wife pops up to shriek a few ill-timed warnings, too.

Though The Forest will probably have zero appeal to newer horror fans, this little bottom-of-the-barrel number will have plenty of nostalgic value for '80s video hounds who might 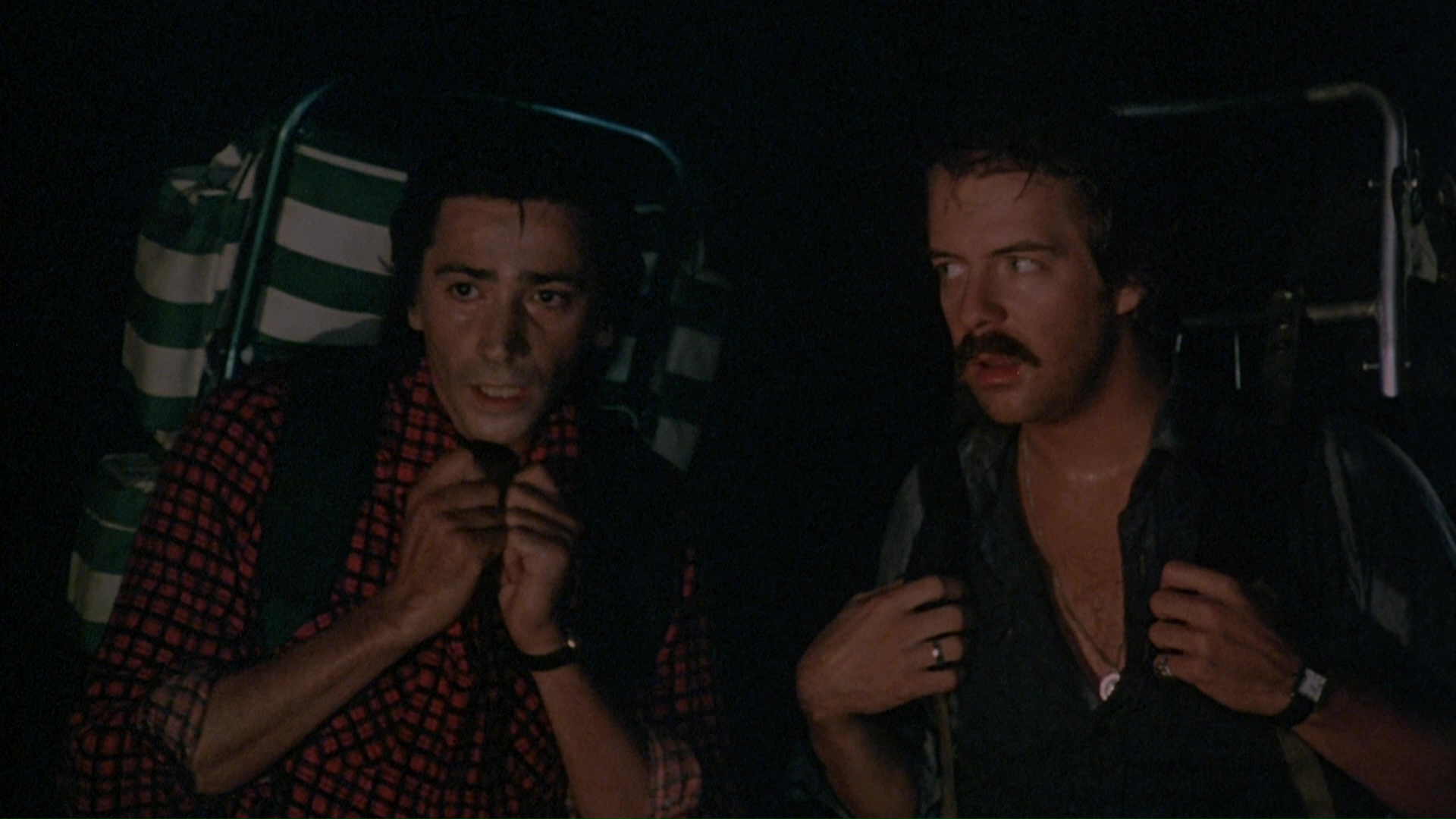 remember salivating over the eye-catching Prism VHS cover in every single mom-and-pop video store in existence. Featuring one of the most obnoxious theme songs in slasher history and an utterly perplexing finale, the film certainly doesn't feel like your average slice-and-dicer but doesn't seem too intent on building up the characters enough to make you care either. Instead it lingers somewhere in between, aiming for atmospheric isolation and natural texture (you get lots of shots of vegetation here) while occasionally remembering to throw in a little screaming or knifing, mostly in the last 20 minutes or so. Director Don Jones had already established himself as a worthwhile sleaze auteur with The Love Butcher and the very underrated Let's Play Dead (aka Schoolgirls in Chains), while leading man Kent (who gives the best performance in the film by far) had a solid drive-in career stretching back through the '60s with such disparate credits as The Thrill Killers, The Mighty Gorga and a slew of biker pics. Between them, it's not surprising that Code Red's release is a whole lot more interesting for the extras than the movie itself.

Code Red first bowed the film on DVD in 2006, presented in anamorphic widescreen from what appears to be a still-decent print that's been through a few projectors in its time. Color presentation looks okay, but blacks are inconsistent (in what looks more like a flaw with the cinematography); also, sometime appears wonky with the aspect ratio, which looks a tad squeezed flat at 1.78:1 but too thin squeezed out to full frame. The mono soundtrack is okay and limited by the threadbare original source. As for extras, the packaging doesn't really list much but this is a fully-loaded 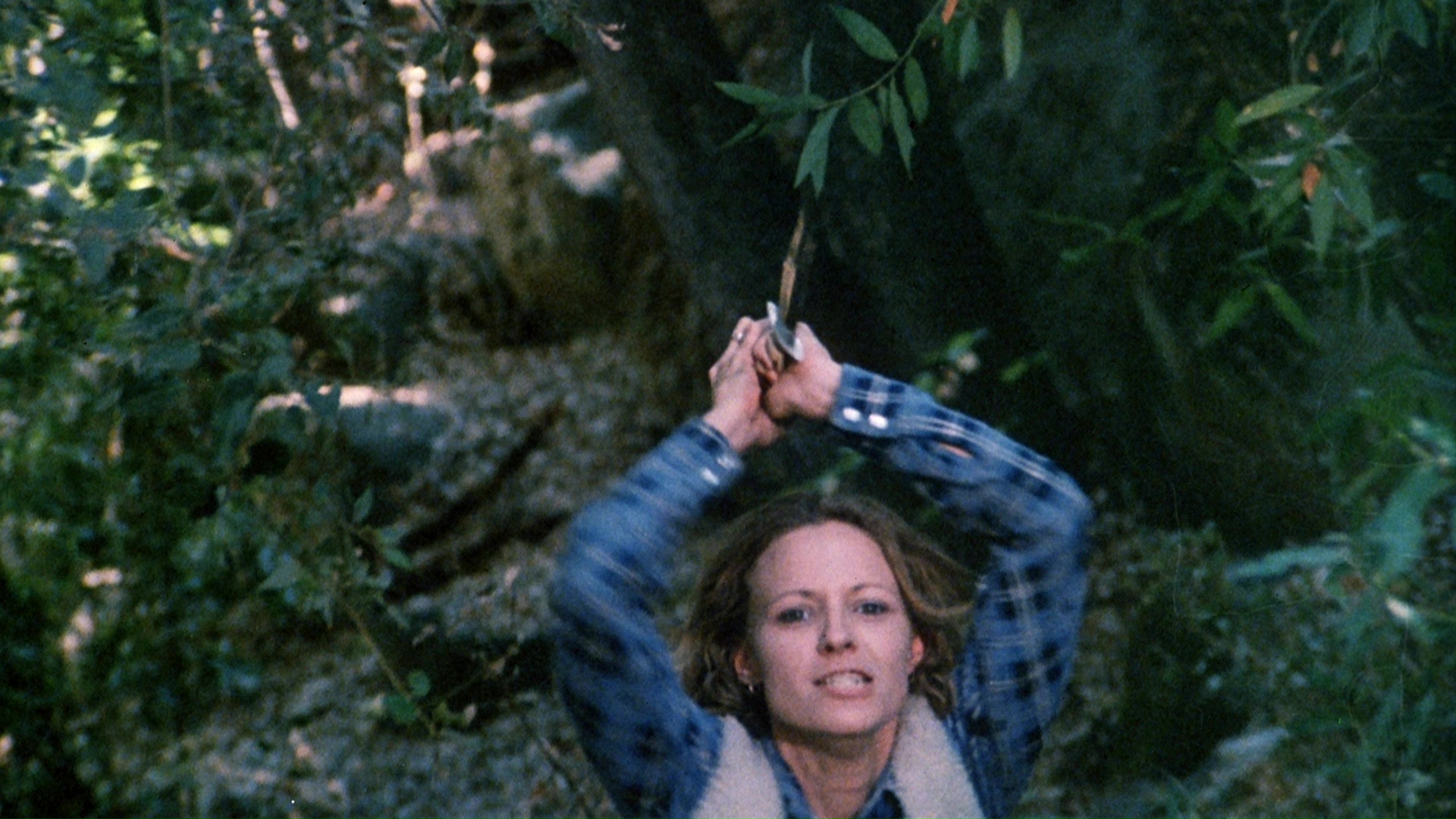 special edition covering just about everything you could ever possibly want to know about The Forest. Jones and Kent contribute a fact-packed commentary track covering the financing, shooting, and casting; they seem pretty pleased with the results, so it would be interesting to get their take 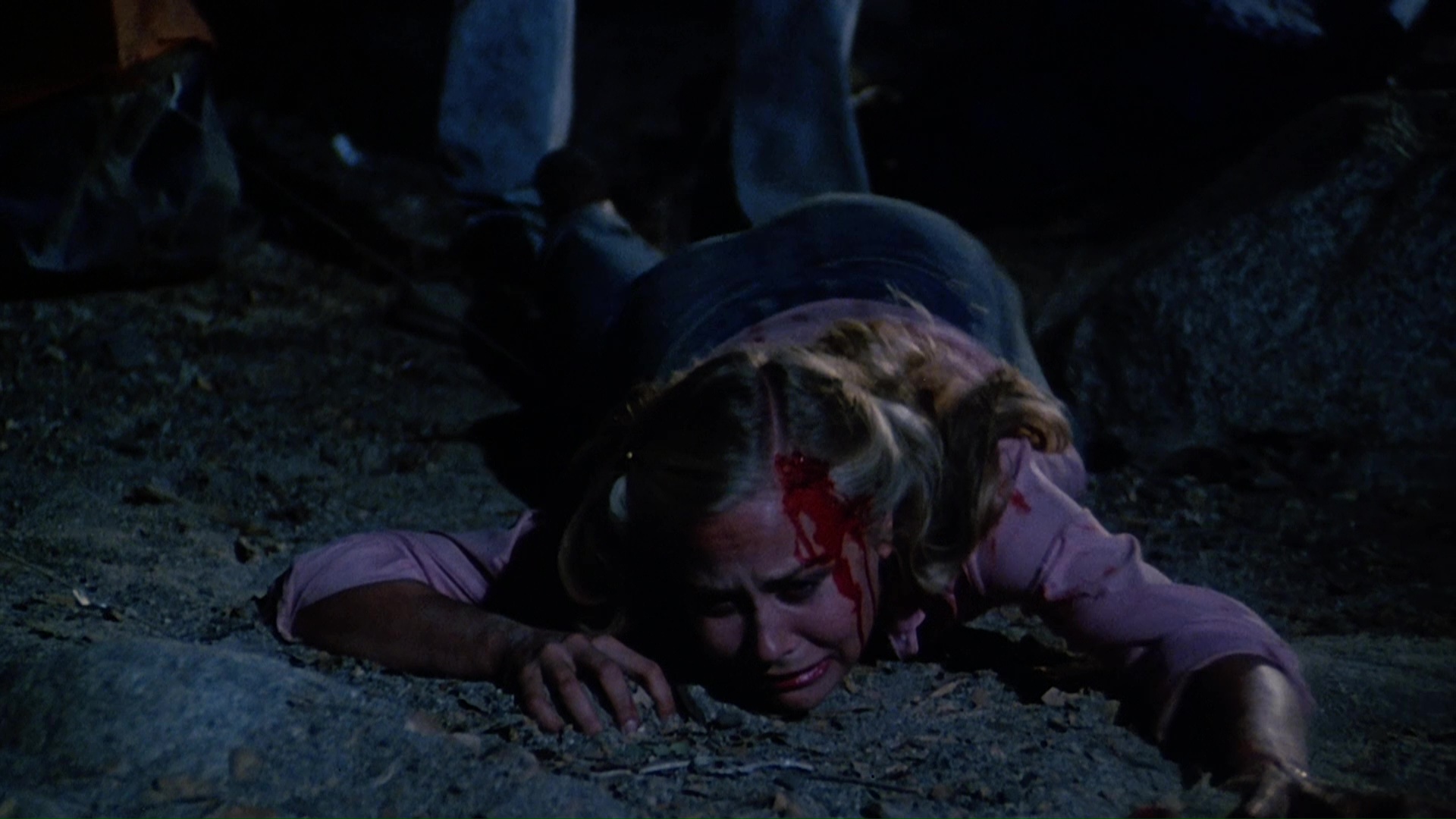 on a genuinely fascinating film like the aforementioned Schoolgirls. Then Jones and cinematographer Stuart Asbjorsen join up for a much lesser moderated track that retreads the same material, just a lot slower and less interesting; stick with the director/actor track, which feels much fresher. Then all three men pop up on-camera for a 13-minute featurette that encompasses the film from a broader scope, including some unfortunate fallout for the director afterwards; despite the bleachy, low-grade camcorder lensing, it's entertaining and worth a peek for any aspiring horror filmmakers or actors, especially to learn about pitfalls to avoid. Other bonuses include a still gallery, a newly-cut promo trailer, and a slew of other Code Red trailers including Sweet Sixteen, Devil Times Five, Don't Go in the Woods, Secrets of Sweet Sixteen, and much, much more.

In 2016, Code Red revisited the film as a Blu-ray release sold directly through Diabolik. The aspect ratio issue is fixed, thankfully, with a bit more image visible on the sides as well, while the new HD scan brings out a lot more detail and natural color shading than before (though the opticals of those opening titles still look pretty shaky). The DTS-HD MA English mono audio is about as good as the undemanding original mix will allow. The featurette, commentaries, and trailer are ported over, dropping only the gallery and most of the unrelated bonus trailers, this time swapped out for trailers for the appetizing roster of Mutant, One Dark Night, Slaughterhouse Rock, Hide and Go Shriek, Devil Times Five (again), and The Dark.