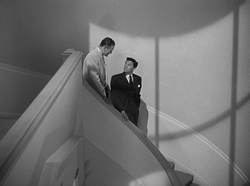 Made at the height of film noir's golden age in Hollywood, Force of Evil remains one of those titles movie buffs love talking about and recommending even if it never seem to pop up on any best-of lists. Though not as flashy or sexy as some of its counterparts, this is easily one of the darkest and most haunting of the pure fil 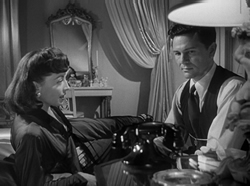 m noir classics as well as one of the career high points for star John Garfield (along with the better-known noirs The Postman Always Rings Twice and Body and Soul) who, along with director Abraham Polonsky, was about to fall afoul of the McCarthy anti-communist witch hunts.

Crooked lawyer Joe Morse (Garfield) spends his working hours covered up and trying to legitimize Tucker (Roberts), a gangster aiming for complete control of the numbers racket. Together they come up with a plan to take down their competitors with an Independence Day scam, but one of the potential victims is Joe's own sad sack brother, Leo (Gomez, an excellent actor seen the same year in Key Largo), a straight-arrow bookie who would be destroyed in the process.

Though filled with striking shots of shadowy interiors and exaggerated angles (including a mesmerizing third act scene involving a game-changing telephone), Force of Evil doesn't quite feel 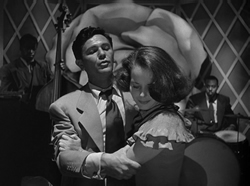 like a traditional noir for its first half or so. The stylized dialogue rattles off a number of literary allusions, at times feeling like a prototype for some sort of poetic medium between Mickey Spillane and David Mamet. Martin Scorsese became an avowed fan of the film for life and often cited it as an influence on his crime films, while noir cultists have embraced it both for its aesthetic values (including a smoky score by Laura's David Raksin) and the presence of Marie Windsor, a significant noir cult figure thanks to The Narrow Margin and The Killing. Another big name in the credits is assistant director Robert Aldrich, who had already performed the same duties on Body and Soul (which was written by Polonsky) and would next head to another underrated noir, Max Ophüls' Caught, eventually becoming a major director in his own right. What's most interesting today is the film's use of communication as a persistent modern force for inequality that keeps a certain class, no matter how criminal, above reproach. The way people speak is as much a part of their character as their clothing, their mannerisms, or their role within the New York landscape (used to bold effect as a sort of bookend to the story), and it's no accident that a technological mode of communication becomes the means of one character's tragic downfall.

Released theatrically by MGM but tossed around through other distributors though reissues and occasional repertory screenings, Force of Evil became part of the Republic Pictures library and was issued by them on VHS and then on DVD early in the format's history, branded as "Martin Scorsese Presents." The same approach applies here via Scorsese's appreciative (and short) video intro, but thankfully Olive Film's Blu-Ray edition (as well as a DVD reissue) features a far, far superior transfer compared to the old Republic master we've had seemingly forever. It's a real sparkler in HD, with the often fascinating touches in the production design (love those shadows and wallpaper patterns) really popping off the screen. Apart from a couple of fleeting instances of print damage, it's very close to immaculate and highly impressive indeed. The DTS-HD mono track also does a fine job with a tricky soundtrack, which often lurches from a near whisper to a dramatic crescendo without warning.