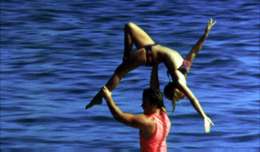 Some people might call this a wild adventure. We call it surfing around the world! So begins the enthused narration of one of the more blatant Endless Summer knockoffs that proliferated throughout the late 60s and early 70s, this time following a merry band of dedicated wave seekers from California and Florida around the globe. Among the participants are McGinnis (from Rendondo Beach, who looks better than she sews), Codgen (a Florida native who enjoys reading goofy books like How to Escapar the Portuguese Shark Danger), and Purvey, our Malibu-based guide first seen dozing on an international plane flight and eyeballing sexy stewardesses. After watching a short called California Surfbirds, they land in Portugal where we get lots of travelogue footage and dreamy shots of our intrepid surfers facing some formidable riptides off the beaches of Guincho, Nazare and Cascais. Then its off to Morocco (where bystander camels provide comic relief), Ceylon, India, Hong Kong (where they try water skiing behind a fishing junk), a crowded Japan featuring indoor swimming pool surfing, and, of course, the gorgeous Hawaiian Islands where the waves look as big as skyscrapers. 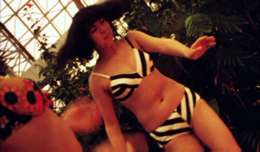 Short, sweet, and summery, Follow Me (no relation to the excellent 1973 Carol Reed film of the same title) obviously doesnt try for much of a narrative as it consists of 90% surfing footage around the globe. Purveys narration (actually provided by voice artist and character actor Jerry Hunter of Hanna-Barbera fame) takes a back seat to the real attraction here, an absolutely killer wall-to-wall soundtrack provided by Stu Phillips just before he started work on Beyond the Valley of the Dolls. Many sequences actually sound like a dry run for that Russ Meyer film, particularly when 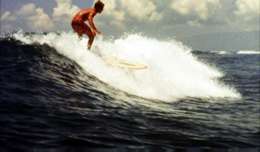 accompanied by the surf pop vocals of Dino, Desi and Billy on catchy songs like Thru Spray Colored Glasses, Like the Wind and Sea, and Just Lookin for Someone. Hilariously, they even provide the song ostensibly performed by a Japanese pop band surrounded by go-go girls in bikinis. This is ear candy of the best kind, essentially turning this into a string of music videos that will delight anyone with an affinity for surf-oriented pop culture ephemera.

Though it garnered a fairly respectable theatrical release from Cinerama and its soundtrack album has remained a popular collectors item for decades, Follow Me has been strangely impossible to find throughout most of the home video era. Fortunately that oversight is corrected with Scorpions DVD, which makes the most of the highly variable film stock used throughout the global shoot. The vast majority of the film looks great, though a handful of early shots have a bluish or greenish tint that appears to be the consequence of inadequate shooting conditions or really odd lab processing. If youve ever seen any Bruce Brown surfing films, this is about on par in terms of cinematic appearance and the amount of damage on what appears to be a 16mm negative source. The sole extra is the original theatrical trailer.