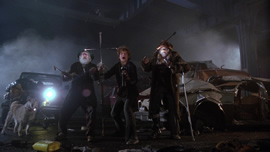 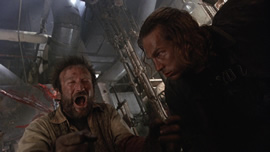 Though it's settled comfortably in the public moviegoing consciousness by now, The Fisher King was quite a surprise when it rolled out in the Fall of 1991. Director Terry Gilliam had been absent from the scene for four years after the journalistic brickbats delivered to his expensive, wildly ambitious 1988 fantasy The Adventures of Baron Munchausen (which has been justifiably reappraised), itself lingering the shadow of the troubled, highly controversial history of his prior film, the modern classic Brazil. No one quite knew what to expect from this film, but a sweet-natured romantic comedy probably wasn't high on the list. Fortunately this is still a Gilliam romantic comedy, which means you get plenty of surreal visuals, a rampaging red knight spewing fire, insane camera angles, and bizarre humor. The real difference here lies in the fact that this was the first time Gilliam didn't write the screenplay; instead this was the second produced effort by Richard LaGravenese, who went on to such films as The Ref, The Horse Whisperer, and Behind the Candelabra. The result is still the warmest and most accessible of Gilliam's films thanks to four winning central performances, with an Oscar-winning turn by Mercedes Ruehl equaled by her co-stars.

A major error in judgment causes arrogant radio shock jock Jack (Bridges) to spurn an unstable listener into a horrific act of mass violence, which sends the DJ on a steep self-destructive spiral that lands him in a seedy part of town late at night among the homeless and destitute. 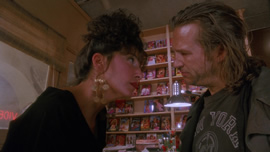 An attack by a trio of abusive bullies 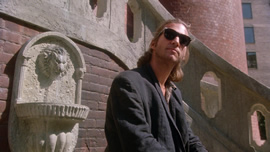 lands him in an eccentric subculture of outcasts including an unlikely friendship with Parry (Williams), a brilliant professor destroyed by the death of his wife in that same rampage. With the aid of his no-nonsense girlfriend, Anne (Ruehl), who runs a video store filled entirely with Columbia VHS releases, Jack decides to help Parry get back on his feet with both a job and a possible romance with the oddball Lydia (Plummer). However, the situation is complicated by Parry's own instability and his committed belief that his destiny is tied to the Holy Grail in the forbidding estate of a New York millionaire.

A sort of guide to literary themes set forth on celluloid, The Fisher King has held up remarkably well as a study in forgiveness, delusion, guilt, and the responsibility we bear for each other. Only a tiny handful of details have become dated (mainly the shock jock aspects of two sections of the film), but even those are enjoyably retro now; in particular, this contains some of the best nostalgic video store scenes this side of Serial Mom and The Lost Boys (including a great bit role for Kathy Najimy). It's also arguably Williams's best dramatic performance (perhaps in a tie with Dead Poets Society), but the underrated Bridges matches him scene for scene in the less showy of the leading roles with a character arc that's perhaps even more poignant. 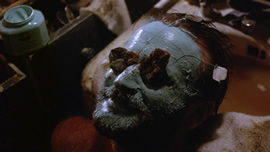 You also get an insane amount of great character bits including roles for sitcom actor Michael Jeter (who steals his big scene paraphrasing a number from Gypsy), Harry Shearer, Dan Futterman, Ted Ross, and Bradley Gregg. Ably supporting the film's emotional highlights are some moments of truly grandiose cinematic chutzpah including the now-famous mass dance sequence in Grand Central station, the charge of the Red Knight, and the climactic ascent for the Holy Grail. 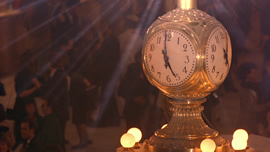 For decades, The Fisher King belonged to that list of Sony-controlled titles issued on laserdisc by Criterion in elaborate editions never replicated on any future format alongside films like Jason and the Argonauts and Silverado. Goodies like a Gilliam commentary and some great deleted scenes were lost early on once that CAV edition went by the wayside. A bare-bones Columbia laserdisc was followed by an equally stripped-down DVD from Sony and a Blu-ray from Image, leaving fans wondering whether a worthy edition would ever surface again. Fortunately that was remedied in 2015 with Criterion's much-need revisit on both Blu-ray and DVD, finally resuscitating the excellent laserdisc extras while adding on some fine new bonuses as well.

The new 2K master is a nice upgrade over the previous HD Sony master seen in broadcasts and on the Image discs, nicely capturing the dark, atmospheric look of the film that caused some of its more effective splashes of color (especially the Chinese restaurant scene with the four leads) to stand out so dramatically. The DTS-HD MA soundtrack features a solid 5.1 mix filled 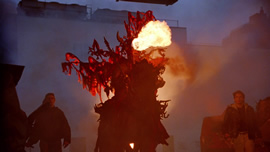 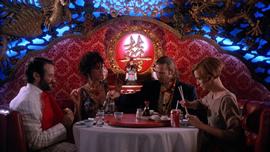 support for George Fenton's understated score. The top-notch Gilliam commentary and deleted scenes (with optional Gilliam commentary) are here of course along with archival material like trailers, costume tests, and a collection of video footage called "Jeff and Jack" featuring Bridges with acting coach Stephen Bridgewater prepping for his radio scenes, while the new material is highlighted by a one-hour HD collection of recent interviews with Gilliam, LaGravenese, Bridges, Ruehl, Plummer, and producer Lynda Obst, plus a 2006 interview with the late Williams about his work here. There's also a fun new piece about the creation of the Red Knight with artists Keith Greco and Vincent Jefferds about how they executed one of Gilliam's most indelible visual signatures, and there's also a new video essay compiling together the copious photos Bridges took during the making of the film. The eye-catching packaging (which oddly looks much more like something by Spike Lee than Gilliam) contains a fold-out insert with a Bilge Ebiri essay about the film, "In the Kingdom of the Imperfect," about the film's unique place in the Gilliam canon and its unique take on New York City as a potential source of recovery and happiness. It's great to have this modern classic back with the treatment it's always deserved.