One of the great pioneers of German silent cinema, F.W. Murnau has become almost exclusively associated in recent years with his influential vampire classic, Nosferatu: A Symphony of Horror. However, his astounding grasp of the visual medium of film is 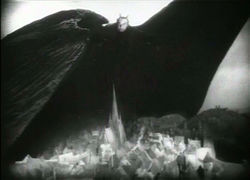 also evident in his other masterpieces, such as Sunrise, The Last Laugh, and the sadly underappreciated Faust, his final film made in Germany before the rise of Naziism sent him packing for Hollywood.

The familiar Wolfgang von Goethe tale of a man selling his soul to the devil serves as a loose springboard for Murnau's fantasmagoria of narrative strands and visual indulgences. The moral saga begins in the heavens, where the divine powers negotiate with Satan (Emil Jannings), a.k.a. Mephisto, over the fate of humanity. Eventually a deal is struck in which an archangel agrees to relinquish humanity to the powers of darkness if Mephisto can gain control of the soul of Faust (Gosta Ekman), an elderly professor and alchemist. The devil appears in a number of guises as he talks Faust into signing a contract, exchanging the human's soul in 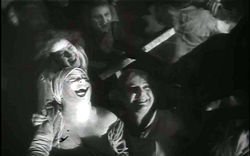 exchange for youth and material goods. Mephisto even takes him flying over the village and mountains on an exotic aerial tour, not to mention an introduction to the beautiful Gretchen (Camilla Horn) with whom Faust falls immediately in love. Along the way the film diverts into scenes of fanatical religious fervor, tragedy, and supernatural horror, before Faust and Gretchen confront their fates in the pyrotechnic finale.

Though not critically regarded as highly as Nosferatu, Faust is about as exciting as silent cinema can be and would make a fine introduction for those who normally insist on a dialogue heavy soundtrack. The striking opening images of skeletal horseback riders plunging through the clouds are just the beginning of an 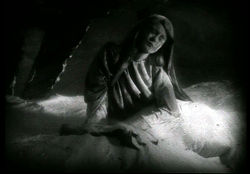 astounding stream of marvelous visionary concoctions. Not to be outdone by special effects, Jannings (The Blue Angel) nearly blasts through the roof with his dynamic, often hilarious portrayal of Mephisto, a charistmatic and terrifying apparition. Whether dishing out quirky flourishes with his hands or, in the most audacious image, looming high in his black cloak to bring the plague onto a small German village, Jannings is simply unforgettable and makes his "human" costars quite dull in comparison. (Keep an eye out as well for Gretchen's brother, played by William Dieterle, future director of Portrait of Jennie and The Devil and Daniel Webster.) The film only makes one significant misstep by tacking on a trite, unnecessary celestial epilogue after already reaching a perfect, wrenching closing shot during the climax; however, moral watchdogs at the time probably insisted on a clearcut moral message at the end lest viewers feel too alarmed by the preceding events.

Derived from an original English language print, Kino's transfer of Faust lives up to their previous collaborations with David Shepherd. Image quality is quite good and detailed, and while some of the unavoidable ravages of time are still in evidence, this is much better than any of the (quite scarce) VHS editions. An excellent orchestral score by Timothy Brock and the Olympia Chamber Orchestra is one of the most effective in recent memory, delicately accentuating the action without any jarring electronic flourishes or pretentious "old timey" inflections to the music. The disc also contains a terrific gallery of behind-the-scenes photographs, including some hilarious shots of Jannings preparing for his role, often only half covered in make up on his face and body. An even deeper look into the film's delirious special effects would have been welcome, but the final work certainly speaks well enough for itself.