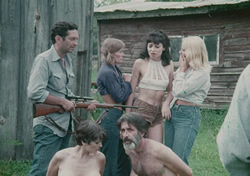 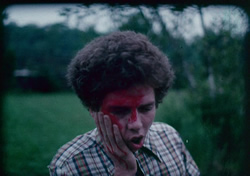 A purveyor of some of the more deranged genre-bending adult films of the 1970s, Zebedy Colt directed (and sometimes starred in) such titles as The Devil Inside Her, Sex Wish, White Fire, and Terri's Revenge, while also appearing in films of every conceivable stripe for others. Often cited as one of his more extreme titles, The Farmer's Daughters manages to swirl together elements of country yokel comedy, roughie rape and revenge, crime film, and flat-out surrealist weirdness, all on a budget of about ten bucks. On top of that it features the most prominent adult role for late monologuist and The Killing Fields star Spalding Gray, who also appeared in Maraschino Cherry and used his experience here as fodder for one of his monologues. Is the film actually good? No, not really, but we'll never see anything quite like it again.

On a country farm, Shep (Colt) and his wife, Kate (Leonard), enjoy some good lovin' in the afternoon, much to the voyeuristic amusement of their three daughters, Martha (McBain), Jane (Dare), and Beth (Willoughby). Both aroused and sadistic, the three girls decide to have some fun with the local farm hand, Fred (Cort), by taunting him, forcing him into an orgy, and degrading him with water sports. Meanwhile three escaped convicts have stumbled onto the property: George (Gray), Pat (Black), and Butch (Marlowe), who rape Kate and force Shep to watch. That's just the beginning though as they eventually hold the entire farm at gunpoint and come up with every sexual combination available... until Fred swings by with vengeance in his eyes. 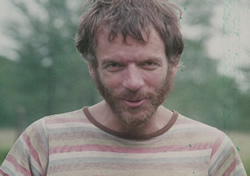 The always great Leonard gives the best actual performance in the film, though there's a certain exaggerated, nasty effectiveness from both the trios of daughters and criminals as they go about their hateful work. Not a pleasant film to be sure, but it's such a strange, scuzzy relic it's hard to look away. The fact that the film somehow manages to end with a multitude of gory gunshot wounds, a rapid-fire freak out editing montage, and a lighthearted twist 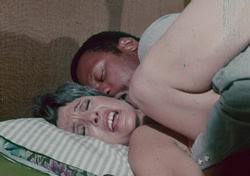 ending is an admirable achievement of some sort, while the end credits are loaded with alternate takes and angles. As for Gray, whose presence here pushes up the curiosity value a few notches, he does an adequate job as the ostensible leader of the gang, though it's a mystery why he's mostly body doubled by Marlowe in his first scene with Leonard but does his own performing later on. There are certainly worse skeletons to have in one's closet, and the fact that he kept a sense of humor about the whole thing should be a lesson to others with titles like this in their past.

Most viewers encountered this one courtesy of its mid-'80s VHS release from VCA, and while it certainly felt nasty, some wondered why it had such an extreme reputation. As it turns out, that transfer was badly butchered and actually removed significant story points by omitting two sequences almost in their entirety (the aforementioned water sports bit and a turnabout variation of it at the end). That same hacked-up transfer was later recycled for Alpha Blue's Colt triple feature along with Virgin Dreams and Sharon, so you can skip that one, too. Thankfully the 2015 DVD release from Impulse Pictures is the first time this has ever been issued complete on home video, with all of its extreme nastiness intact. It only runs a little over two minutes longer than the other version, but to put it mildly, it makes a huge difference and results in a much more coherent film. The new transfer from a reasonably nice film print is also a significant improvement; don't expect top-grade HD restoration here, but there's more image in the frame on all four sides (with the viewfinder edges visible in some shots), and far better color and detail than the ancient VCA tape. No extras, not surprisingly, apart from a promo for the 42nd Street Forever adult loop series.