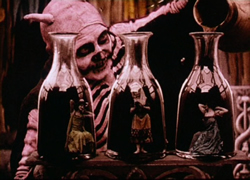 The salvaging of early treasures from our movie history around the world has produced some miraculous finds in recent years, ranging from a once-lost tinted copy of Georges Méliès' "Trip to the Moon" to a few lucky silent features once thought extinct. If you love seeing how fantastic cinema really began, then you can also add this BFI collection to the list, a frequently dazzling collection of scènes de féeries, or fairy films. These miniature fantasies created in the first d 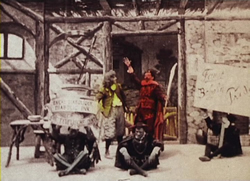 ecade of the twentieth century run anywhere from one to around seven minutes, translating the spectacles of the theater stage to the movie camera with hand-tinted colors accentuating such elements as magical creatures, transformations from humans into natural elements like butterflies and flowers, and even adaptations of familiar biblical stories and fairy tales.

Theater was obviously the dominant public art form when Pathé commissioned these projects, which often feature startling bits of visual trickery later adapted by other filmmakers (including nifty miniature people in glass bottles, later used to memorable effect by James Whale in Bride of Frankenstein). Strange and beguiling, these are surviving films (some missing little snippets of footage, but you can still get the idea) existing in the BFI archives and collected here to find a new audience. The presentation here is chronological, starting with 1901's "Un drame au fond de la mer" ("Drama at the Bottom of the Sea"), in which two divers descend into a painted depiction of the ocean's depths. 24 more films follow (not counting the extras), many directed by Ferdinand Zecca, Gaston Velle, and Segundo de Chomon. The highlights are many, with the second film being one of the b 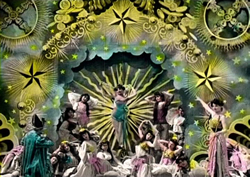 est: "Les sept châteaux du diable" ("The Devil's Seven Castles"), an 11-minute rendition of "Faust" with the devil dragging the hero down to the River Styx. It's a gothic, impressive piece of artistry whose aesthetic is elaborated upon in another short, a 1902 version of "Ali Baba and the Forty Thieves" complete with wild painted tableaux, posing women, and Arabian-inspired dancing.

"Japonaiseries" is a beguiling little demonstration of a Japanese magic performer, aided by some fun cinematic sleight of hand. The hallucinatory "La danse du diable" (translated overseas as "Weird Fancies" for some reason) features a demon conuring women and star fields in a weird precursor to Busby Berkeley, while the striking "La poule aux oeufs d'or" ("The Hen that Laid Golden Eggs") features wild superimpositions and other in-camera effects to turn the familiar morality story into a freaky 11 minutes complete with a shot of Satan's face emerging from one of the titular eggs. You also get to see actors playing Christians tangling with what look like very real, very dangerous lions in "Martyrs chretiens" ("Christian Martyrs") from 1905, while a bat transforms into a dancing woman in "Loie Fuller" and "L'album merveilleux" ("The Wonderful Album") is a quirky bit of supernatural gimmickry with an enchanted picture book bringing figures to life. 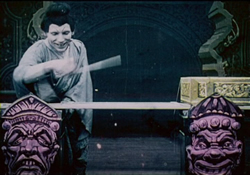 Other highlights include "L'antre de la sorciere" (Anglicized as "The Bewitched Shepherd"), which features a sorceress dazzling a jilted shepherd with visions of skeletons and gender-changing phantasms; the sweet "La fée printemps" ("Fairy of Spring"), about a country couple longing for children during winter time; an expressionistic, 16-minute version of "Cinderella," a nifty 12-minute version of "The Blue Bird" with surprisingly ambitious costumes and effects, and a 14-minute adaptation of "Sleeping Beauty," all offering unique twists on the familiar tales; the ghoulish "Le spectre rouge" ("The Red Spectre") with a skeleton-faced alchemist performing demonic tricks including the aforementioned miniature people in glass bottles; and a really creepy gathering of devils when a girl is lured from a cemetery into the underworld in "La legende du fantome" ("The Black Pearl"). Some of the other shorts are basically fragments or slightly odd dance routines, though they have their points of interest as well, too. 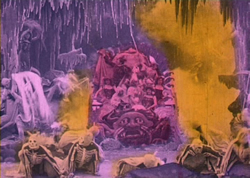 Considering the age and history of these films, the BFI DVD is a welcome treat for almost all of them. Only a tiny handful are taken from black and white prints, as most of them have the original color tinting and look pretty great. The constant barrage of wild, stylized hues is an intense experience after a few minutes, and it's a bit surprising that someone in the late '60s didn't think to stitch some of these together into a feature, slap on some psychedelic music, and market it to teens looking for another state of consciousness. The shorts have soundtracks composed by a variety of different Touch artists, some of whom have appeared on other BFI releases, including Philip Jeck, Fennesz, Chris Watson, Jana Winderen, Marcus Davidson, Leif Elggren, Sarah Nicholls, Maia Urstad, BJ Nilsen, Sohrab, and the London Snorkelling Team, among others. The disc also features a handful of additional shorts from other studios: "Au pays de l'or" ("In the Land of the Gold Mines"), a vignette about dwarves hoarding gold underground much to the surprise of an interloping maiden; " Georges Méliès' eerie 11-minute adaptation of the macabre "Bluebeard' fairy tale, complete with an avant garde score by SAVX; and a British 1922 take on "Little Red Riding Hood" from Anson Dyer. "La danse du diable" also features multiple score options for a string of very different viewing experiences. The liner notes booklet is especially useful here as Bryony Dixon contributes a thorough essay about the history of these films and their cultural influences, while Mike Harding offers a write up called "Scoring the Past" about the process of creating accompaniment for these films. Each film also gets a brief written set of notes which help identify the recurring filmmakers, producers, and visual motifs running through multiple titles. Perhaps the main essay sums the entire fascinating disc best with a few choice final words: "Very pretty - and a bit weird."