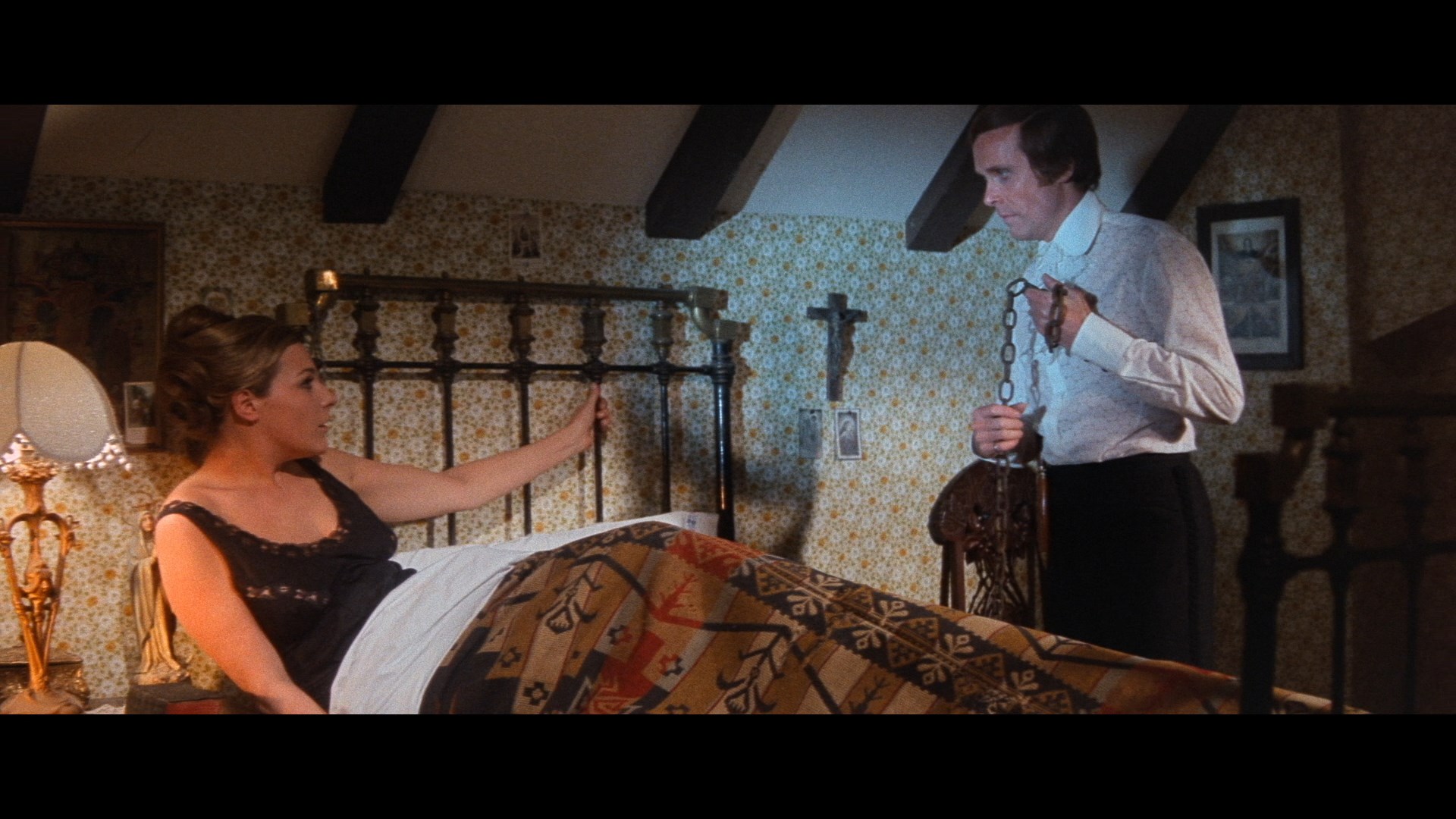 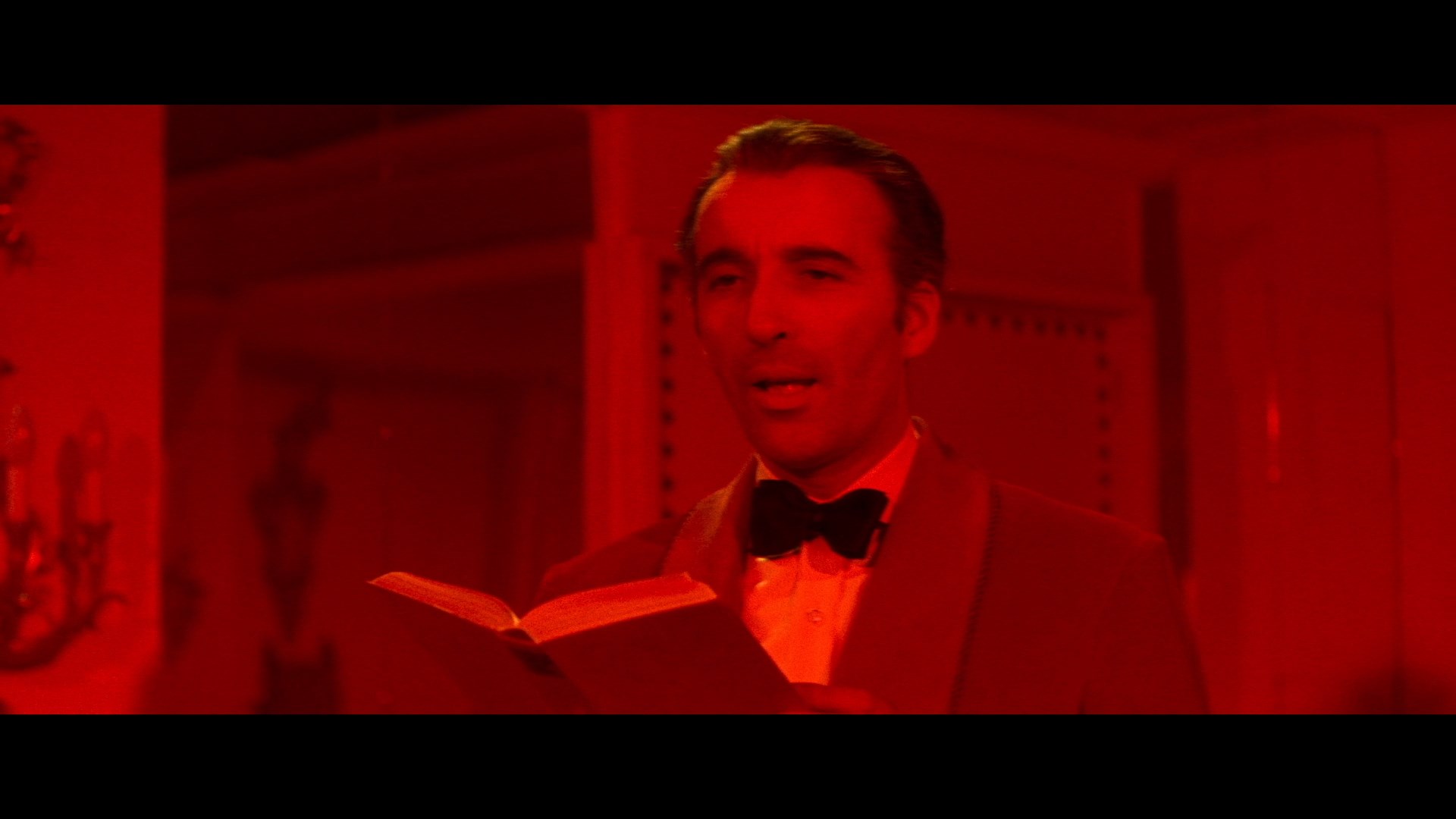 No other film by Jess Franco enjoyed the long-running mystique that surrounded this 1970 modernization of the Marquis de Sade's Philosophy in the Boudoir, which opened as a softcore bondage film in 1970 complete with a (soft) X rating in the United States. After that it disappeared for decades, with a few stills and occasional tantalizing write ups (most notably in The Psychotronic Encyclopedia of Film) frustrating fans of weird cinema yearning to see what appeared to be a lost film. Salvation eventually arrived in 2002 when Blue Underground unveiled the film as one of their earlier DVD offerings in a full-fledged special edition, finally providing what turned out to be a key piece of Franco cinema. Thirteen years later, the label revisited the title as a deluxe Blu-ray and DVD edition, adding even more to the film's peculiar but haunting visual luster. 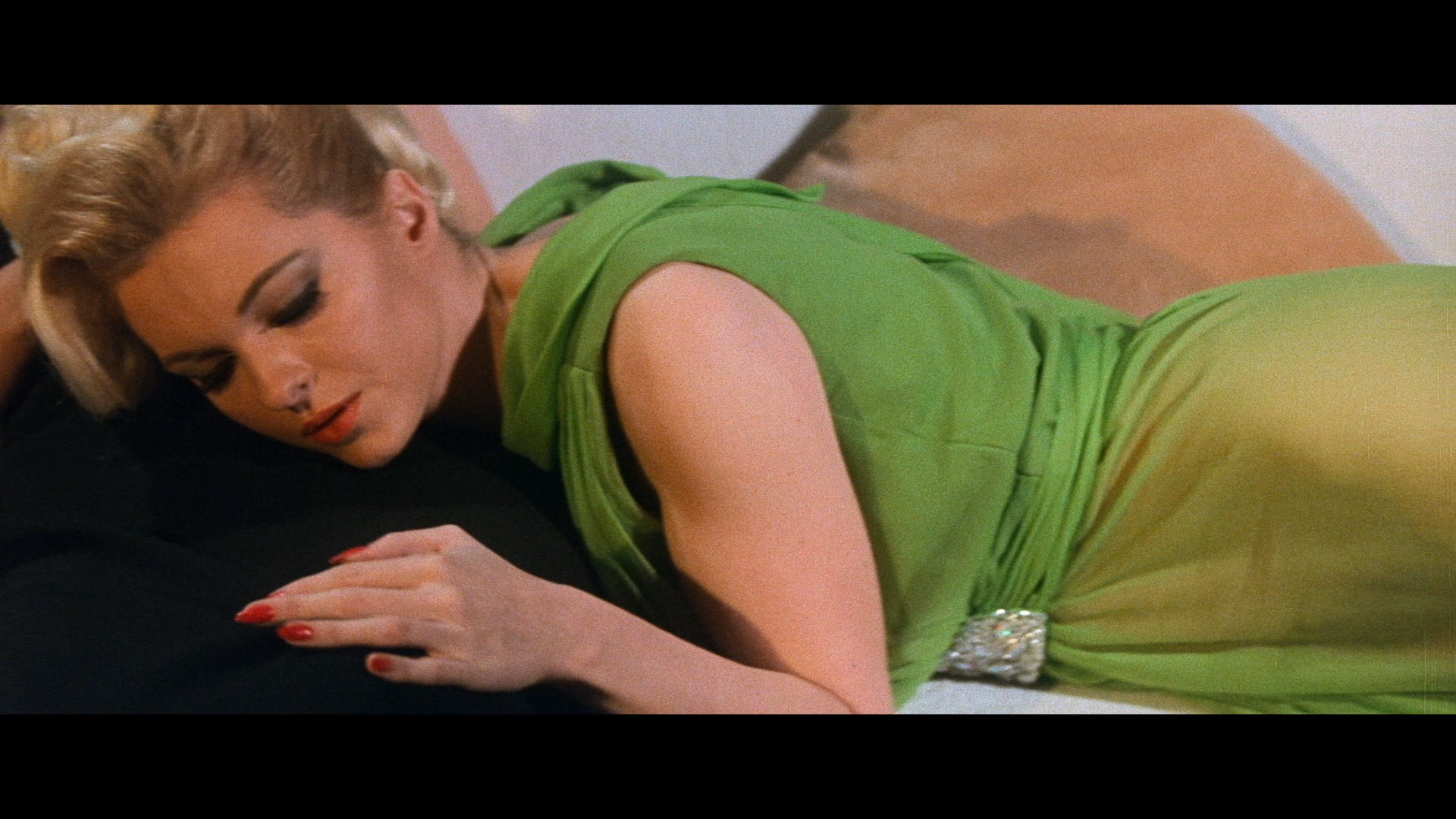 Madame Saint Ange (Rohm), who's already cast a sexual spell over Eugenie's father (Muller). So it's off to a remote island for a few days with the scheming older woman and her withdrawn stepbrother, Mirvel (Taylor), where the girl is slowly initiated into a realm of debauchery that soon takes a very dark turn.

Though Franco had previously tackled de Sade as a period piece with Justine, this film finds him really tackling the author fully for the first time 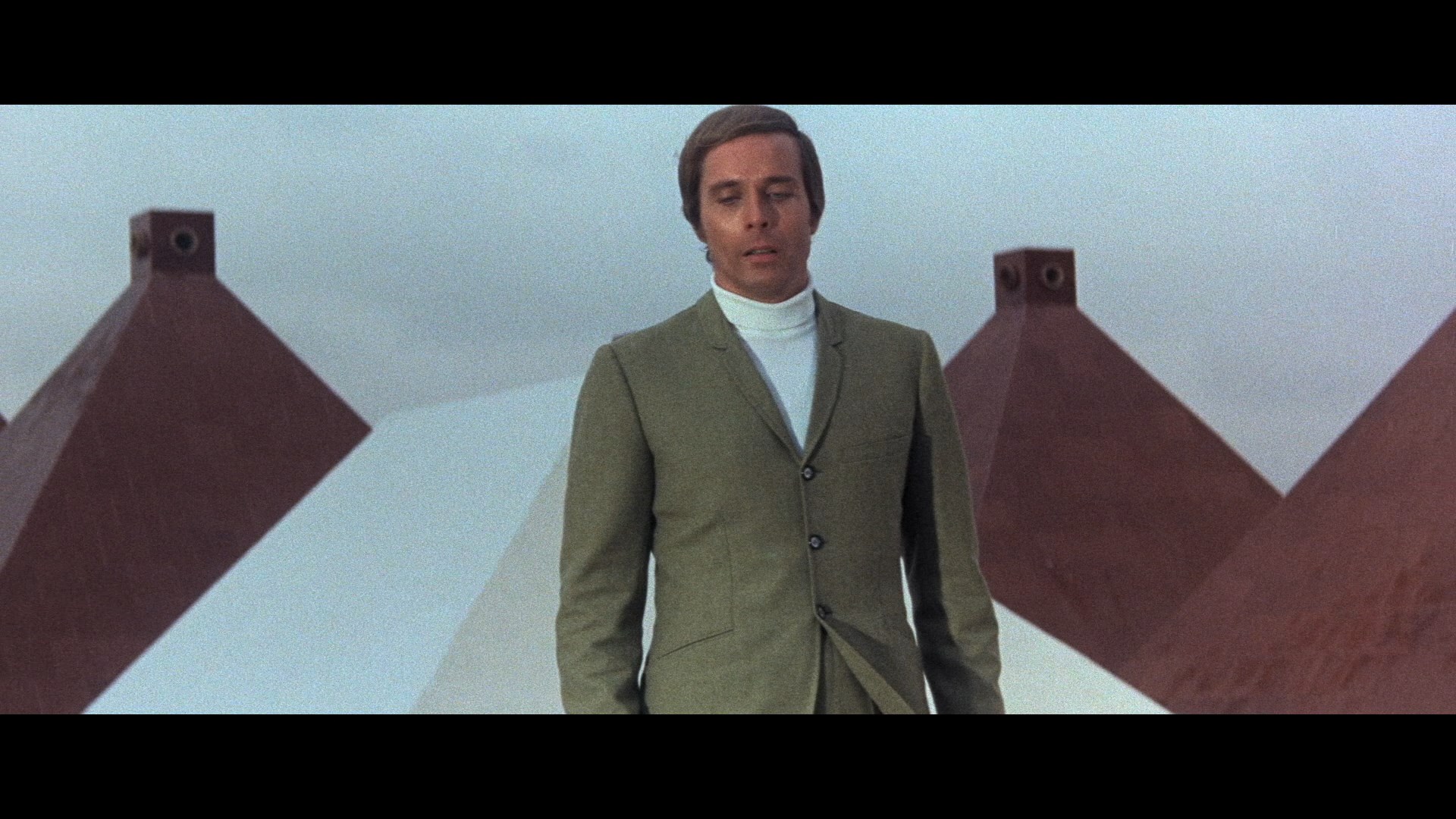 with a keen understanding of the necessary tone of jaded amorality. The savvy casting of Christopher Lee (who had no idea how sexual the finished film would be) is a major asset as well; though he has limited screen time, he's an imposing presence as Dolmance, a maestro of the perverse seen reading passages of de Sade during ritualistic sex acts before arriving on the island with a horde of fellow initiates for a key role in the finale. The highly extreme content of the original novel was understandably softened considerably (with Eugenie's mother, the most abused character, relegated here to a very minor role), but the tone is dead on as the story swirls down into a psychedelic orgy of sex and murder with Liljedahl at the center as a more innocent, tragic variation of de Sade's anti-heroine. This time out producer and screenwriter Harry Allan Towers adopts his occasional pseudonym, "Peter Welback," though he'd kept his real name on Justine and his other collaborations with Franco (99 Women, Venus in Furs, Count Dracula, etc.) Perhaps more importantly, this also meant that Rohm (Towers' girlfriend at the time) was cast in one of the main roles and turned in a terrific 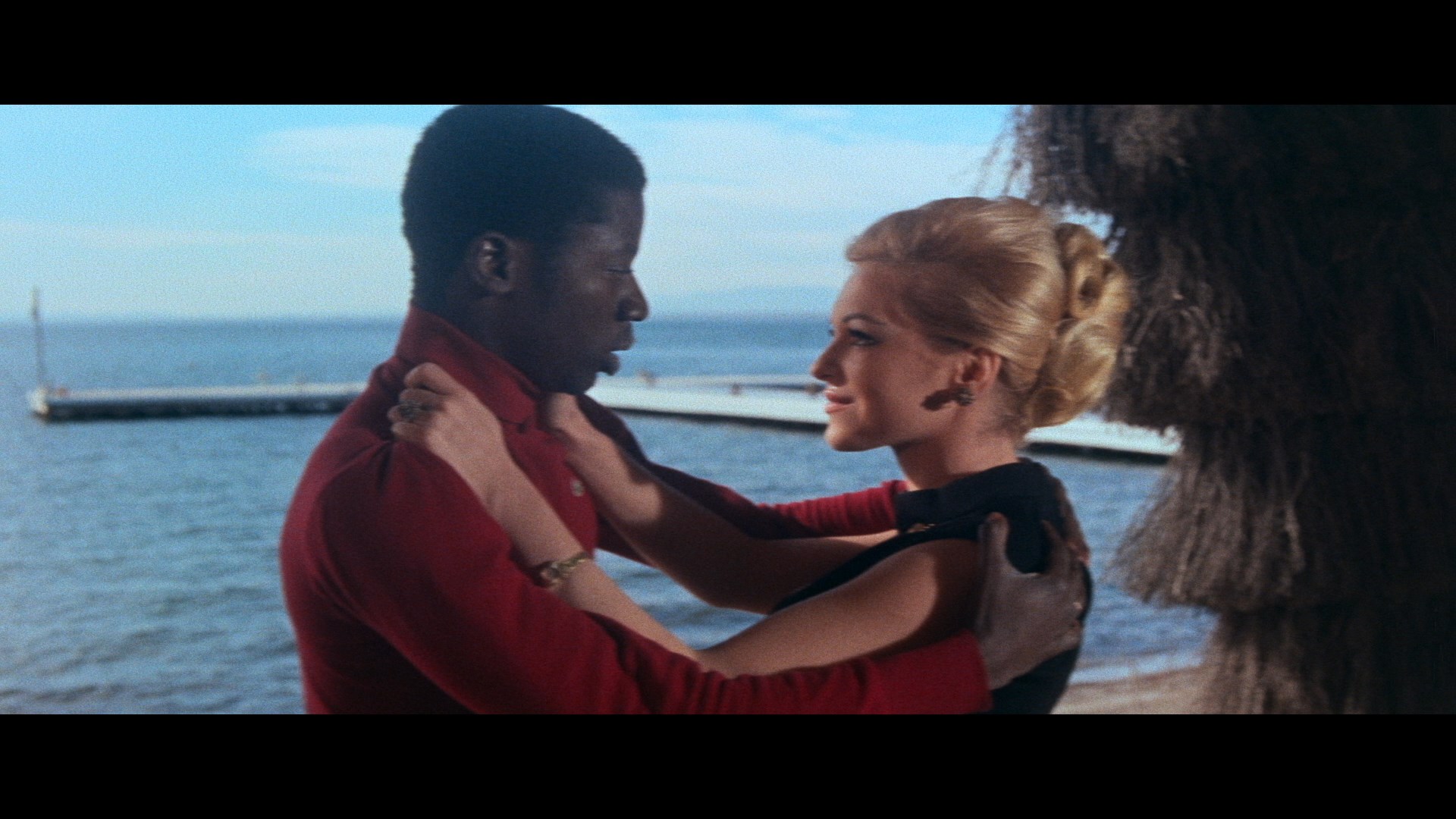 performance, and Justine composer Bruno Nicolai was brought back here to contribute one of his best scores, a wild mixture of druggy party music, breathy Edda Del Orso vocalizing, and tropical lounge. In fact, the soundtrack played a large part in keeping the film's reputation alive during its absence with vinyl and CD editions piquing interest thanks to its standout tracks, most notably the now legendary "De Sade 70" (which also served as the film's alternate title in some territories).

The look of Eugenie has been confounding viewers since its home video debut, adding some fuel to the fire for those who consider Franco a sloppy technician. Several shots dotted throughout the film are obviously out of focus, reportedly due to a cameraman's negligence. Regardless of whether that's true, the occasional focus goof works in a handful of shots that being blurry only to focus in and sometimes back out again, 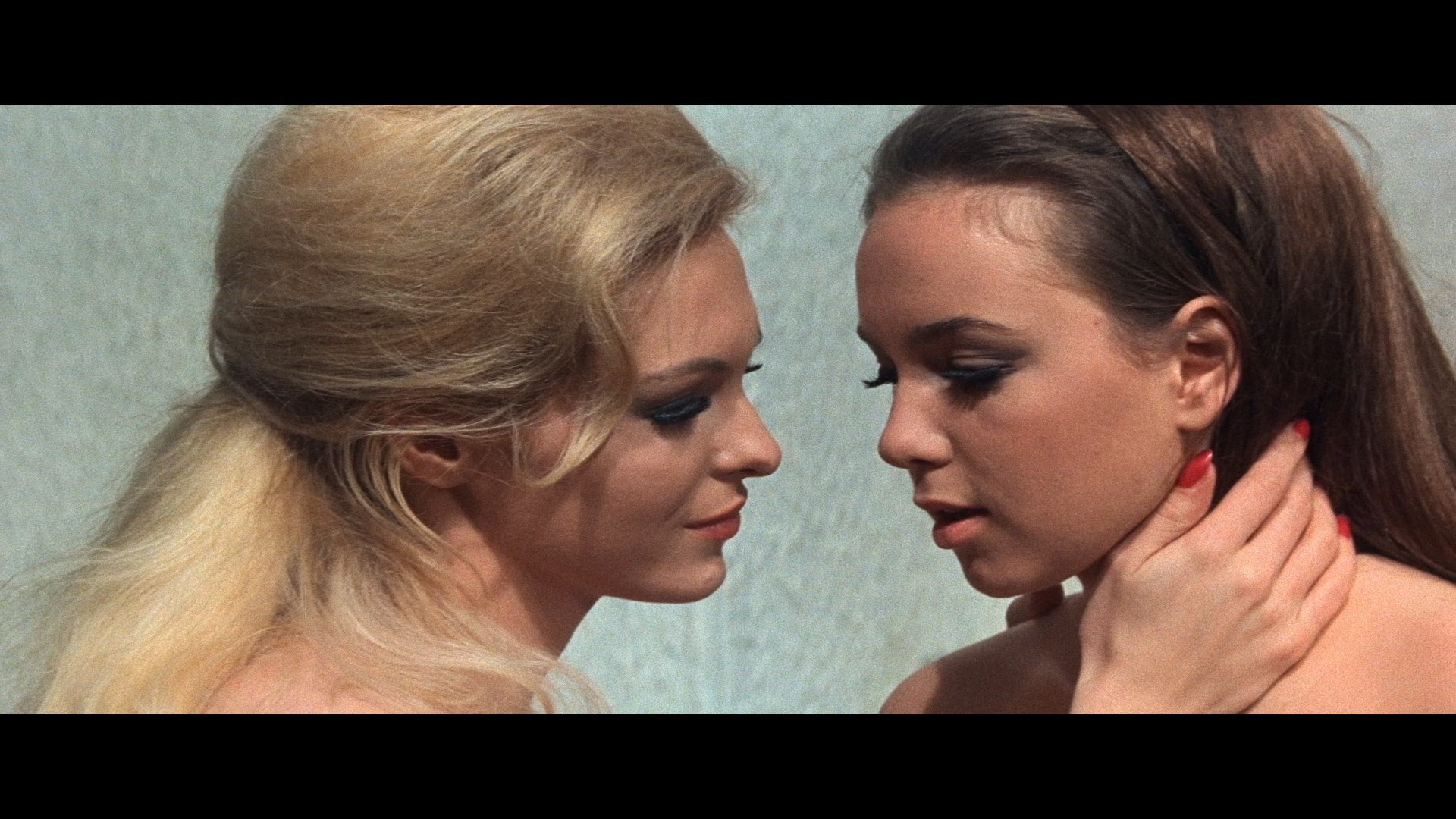 not exactly inappropriate for the kinky, voluptuous dreaminess of the film itself. In any case it's also a stylish and often striking film with Franco's trademark seaside Spanish landscapes and sparing but effective use of color gels creating a enjoyable candy dish of visual goodies. That look is served well by Blue Underground's Blu-ray (with an updated DVD included as well along with a third disc, the CD soundtrack, which mirrors the contents of the first disc in the long-discontinued Digitmovies double-disc release). The scenes with heavy red filters benefits especially well with a great increase in detail and overall resolution freed from the constraints of NTSC smudging, 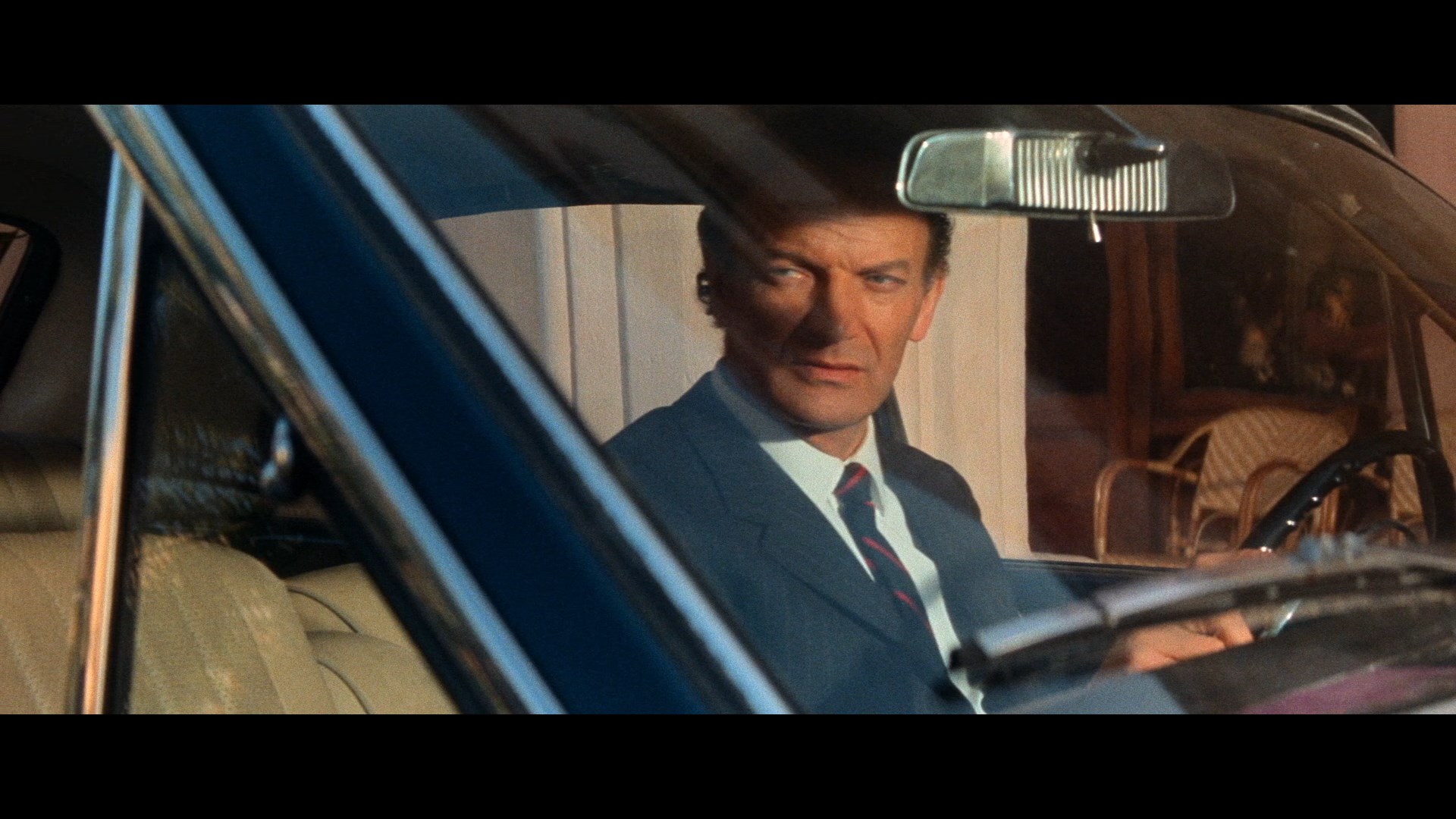 while the daylight exteriors now look pristine and pin sharp. The English audio track is presented in DTS-HD mono, sounding excellent, with optional English SDH, French, or Spanish subtitles. Carried over from the prior DVD is the theatrical trailer (which is quite good) and a 17-minute featurette, "Perversion Stories," featuring recollections from Franco and Liljedahl (in a rare on-screen appearance), and more briefly, Lee and Towers. Franco and Lee are the best raconteurs, not surprisingly, but all have some fun stories about the shoot and its marketing as a sex film, which made sense at the time but doesn't really capture the full scope of what's in store here. New to the release is an improved HD stills and poster gallery and the participation of Stephen Thrower, whose writing on the film in his essential book, Murderous Passions: The Delirious Cinema of Jesús Franco, has been adapted into new liner notes (replacing the ones by Tim Lucas for the original DVD). Thrower also appears for a new 18-minute featurette in which he runs through this portion of the Towers/Franco era, Franco's trajectory of de Sade adaptations, and the necessary departures from the source material that resulted in one of Franco's first full-strength sado-erotic masterpieces.