THE EARLY FILMS OF PETER GREENAWAY I

Before launching on a career as one of Britain's most consistent cinematic provocateurs, Peter Greenaway created a series of short films (and in one case, an extremely long film that feels like a series of shorts strung together) in which his experience as a painter and documentary editor collided with often amusing, tantalizing results. He first began dabbling with film in the 1960s, but it wasn't until the late 1970s that the Greenaway style began to truly take shape. This pair of DVDs compiles the highlights of his pre-1982 career, culminating in what many still consider to be his masterpiece, The Falls. 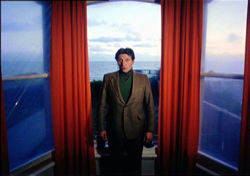 The first volume contains six short films, with only one black and white project, 1969's "Intervals." This six-minute look at wintertime Venice focuses on repeated footage with different musical accompaniment (lifted from Vivaldi), producing a distinctly new mood each time. The more overtly humorous "Windows" (1974) features narration (provided by Greenaway) over four minutes of shots depicting an English countryside in which 37 residents felt compelled to commit "defenstration," i.e., falling out of windows. The first of Greenaway's lavish "fictional histories," this is a good primer for newcomers and features effective use of Jean-Philippe Rameau on the soundtrack. Greenaway returned to the same location in 1976 for the sunnier "H Is for House," one of his notorious listing exercises, in which similar narration provides a deadpan 9-minute listing of absurdly juxtaposed items beginning with the letter "h" while a mother plays with her young daughter. The same year Greenaway also directed "Dear Phone," running 17 minutes, in which common telephone boxes take on a ridiculous meaning when used to illustrate a rambling narrative (shown as bits of written text) about men whose initials are "HC" trying to reach a woman named Zelda. The whimsical, 11-minute "Water Wrackets" from 1978 presents a series of beautifully filmed lake shots (both vistas and shimmering close-ups) while narrator Colin Cantlie (who also did services on numerous other Greenaway shorts) describes a distant future in which five lakes have been artificially created by the military. Featuring lush photography and elegiac music, this is a stylistic forerunner to the director's first mainstream film, The Draughtsman's Contract. However, the highlight of the set is 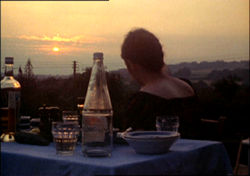 certainly 1978's "A Walk through H," which introduces several elements destined to figure prominently in future work: music by composer Michael Nyman (who provided most of his feature scores through Prospero's Books), the enigmatic character of Tulse Luper (who became the protagonist of the sprawling The Tulse Luper Suitcases multimedia series), and the obsessive use of the number 92, represented here by a series of maps used by an ornithologist across Europe. Even at 41 minutes it's a densely packed ride, throwing the viewer through a museum's gallery and into a bizarre world entirely of Greenaway's creation, all accompanied by Nyman's marvelous, hypnotic score.

Disc two begins with another 1978 short, the 41-minute "Vertical Features Remake." Lampooning film criticism of the period, Greenaway depicts four attempts to reconstruct an unfinished film by Mr. Luper, Vertical Features, which pathologically fixates on vertical objects (telephone poles, trees, sticks, etc.). None of the academics involved can agree, however, which results in a Rashomon-style diversion of styles each time. That's just an appetizer for The Falls, a sprawling, three-hour examination of the effects caused in the future by a Violent Unknown Event ("VUE") involving birds, which has affected the lives of 92 people (whose last names all begin with "Fall") now affiliated with our feathered friends in one form or another. Along the way we meet an elegant singer attempting to sing with bird noises, a man whose body is remodeling itself one organ at a time to conform to aviary standards, and other eccentric personalities who provoke amusement and bewilderment, usually at the same time. Throw in a few jokey nods to Hitchcock's The Birds, and you've got a piece of celluloid truly unlike any other. How willing viewers will be to 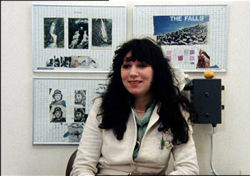 sort through the entire running time depends entirely on one's tolerance for Greenaway's flights of fancy, but it's a creative, often dazzling experience for those willing to put in the hours. Again both films contain exceptional Nyman scores, offering a taste of things to come.

Both DVDs feature the best possible transfers one could expect for the films, which are in good shape albeit limited by technical conventions of the time. The Falls was released in a softer-looking VHS edition in the UK, while "Dear Phone," "A Walk through H," and "Water Wrackets" were issued on a tape compilation, both under the Connoissuer banner. The DVDs make for a more compact and obviously longer experience, and fortunately Greenaway's extensive participation in the discs puts these exercises in a much more accessible context. Apart from contributing new liner notes to both sets, Greenaway also appears for a series of video introductions which can be played straight through or chopped up as separate intros for each film; his comments are placed in Paintbox-style fashion over montages from the films, similar to the approach used in A TV Dante. Other extras on both discs come in the form of two galleries, "Artworks" and "Archives," which present sketches, paintings, written plans for unmade films, and other assorted bits and pieces from this time period. The packaging also promises hidden features, which will be reported on once they've been uncovered in typical Greenaway gamesman fashion. It's also worth noting that, despite Greenaway's reputation, both discs come with "PG" ratings and are mostly suitable for any viewers, though it's doubtful children will get much out of these; apart from a bit of nudity in The Falls, his trademark "excesses" are kept in check here.