Don and Kath Henderson, a typical Australian middle class couple, decide to invite their friends over for a dinner and cocktail party to watch the nation's much-anticipated election returns. Unfortunately, as the booze and tension begin to set in, the genteel group finds itself becoming catty and eventually violent, leading to brawls, skinnydipping, sexual dalliances, 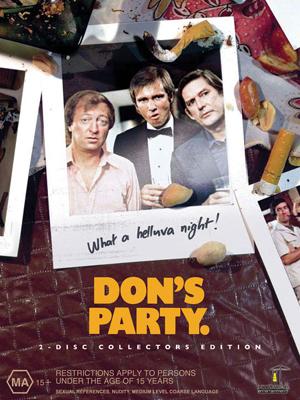 and other antisocial activities.

Adapted by writer David Williamson from his stage play, this acerbic black comedy retains the intimacy and bite of a theatrical production combined with the liberties provided by the evolution of '70s cinema: profanity, frontal nudity, and political subtext (incidentally, the political party terms are reversed in Australia - right is liberal, left in conservative). More significantly, this marks a bridge in the filmic career of Bruce Beresford, who had previously cut his teeth on satiric sex comedies like the Barry McKenzie films. Here Beresford's raunchy history still shines through but is integrated into a more socially relevant whole as Don finds his party disintegrating into a backbiting mess. Later Beresford went on to more commercial, mainstream statements like Driving Miss Daisy and Paradise Road. The late John Hargreaves serves nicely as the audience identification figure here, while sharp-eyed Aussie cinema followers will enjoy spotting Jeanie Drynan, years before she played the tragic mom in Muriel's Wedding, as Kath. Late night Cinemax veteran Graeme Blundell, who slummed his comedic talents in soft porn comedies like Alvin Purple and Pacific Banana, turns in an atypically brash and edgy performance as the conservative young turk of the group.

The bare bones American disc from Fox Lorber was the first DVD out of the gate in all its shag carpet glory after a very long absence from U.S. video. The full frame image doesn't appear to be missing anything significiant, indicating this was shot for 1.66:1 exibition at the widest. The detail is much improved from the ragged, blurry prints that have passed around on these shores; the kitschy '70s Aussie fashions and art direction now look bright and vivid, though the transfer is a bit too light and benefits from TV monitor or player adjustment. The mono soundtrack is unspectacular, with no significant noise. However, the film is much better served by the later double-disc Australian edition, which presents the correcte matted aspect ratio and a fresher-looking transfer as well as clearer audio. Extras include trailers for this and other Beresford films, a feature-length "Crashing the Party" doc with Beresford and the surviving cast members talking about the film, a Williamson featurette, and additional solo interviews with the cast and crew.