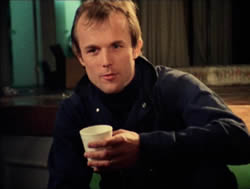 Made at a time when the general public thought horror movies outside of Hollywood were just beginning to gain any kind of critical respect, Document of the Dead remains a testament unlike any other on film. A film student named Roy Frumkes, the future producer of Street Tras 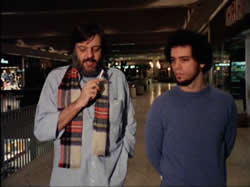 h, was allowed to bring a 16mm camera to the Pittsburgh shooting locations of Dawn of the Dead, George Romero's apocalyptic 1978 zombie/consumerism masterpiece; in essence, the end result (along with the later Dario Argento's World of Horror, coincidentally enough) created the template for the modern making-of documentary we now found on home video releases.

The original version of Document of the Dead, which runs 66 minutes, focuses mainly on Dawn and was intended as a teaching tool to show students the process of making a low-budget movie from pre-production through distribution. That means you get lots of great footage of Romero, producer Richard P. Rubinstein, the actors, and FX legend Tom Savini at work on the production. Narrated by the late Susan Tyrrell (Forbidden Zone), it's a mixture of academic appreciation and how-to manual, pointing out some of Romero's aesthetic choices in both this film and his two prior classics, Night of the Living Dead and Martin. Frumkes later revisited the film for its DVD debut from Synapse in 1998, adding shot-on-video footage from the set of Two Evil Eyes and more interviews with Romero to bring the running time up to 91 minutes. Basically it's the original film with a lengthy appendix bringing it up t 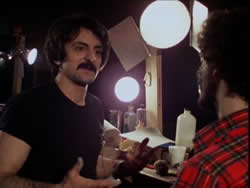 The 2012 edition entitled The Definitive Document of the Dead is a far more radical reworking, ditching the familiar jokey Marx Brothers opening (a Pittsburgh gag taken from A Night in Casablanca) and now beginning with a lengthy stop-motion zombie sequence created by a student from the School of Visual Arts and accompanied by a Dutch vocal version of "Greensleeves" rewritten with zombie references. (No, really! The English-translated version, written by Frumkes, also appears over the end credits.) From there we go to newer footage of Romero speaking to an audience about his directorial career, which then segues into the old Document of the Dead, more or less. It runs a bit tighter now given the altered opening and removal of the original end credits, though it still contains the '90s footage afterwards. The compressing also makes room fo

r a slew of new footage after that focusing on Romero's career since then, which has mainly been dedicated to continuing the zombie cycle. Day of the Dead remains essentially glossed over while we instead leap over to Land of the Dead, Diary of the Dead, and Survival of the Dead, including newer bits with Romero and Savini as well as appearances from Romero's daughter Tina, director Danny Boyle (whose 28 Days Later is one of the best post-Romero zombie films), Bill Lustig, Dario Argento, and FX artist Greg Nicotero, plus a few other surprise appearances including a fly-on-the-wall visit from a certain beloved British zombie movie pair. There are also some fun testimonials shot a few years ago at a Chiller convention, including a certain chihuahua regulars may remember fondly. The quality obviously veers a bit depending on the source, with most of it shot full frame but with a handful of matted 1.78:1 selections thrown in here and there. That said, the DVD looks about as good as it could under the circumstances. The one extra is a nice one, a new audio commentary with Frumkes in which he both points out the changes and additions made along with anecdotes about the original production. It's a fun, affectionate chat, including a tantalizing description of some lost footage of a zombie Santa Claus during the shooting of Dawn. Let's hope that turns up someday. Synapse has also prepared a two-disc version sold only through its website containing the same DVD as well as a Blu-Ray of the original version prepared in '79 (but, for reasons explained in the commentary, essentially unseen until the mid-1980s). That version is not yet available for review but can be purchased here, limited to 1500 copies and also including a fold-out poster.